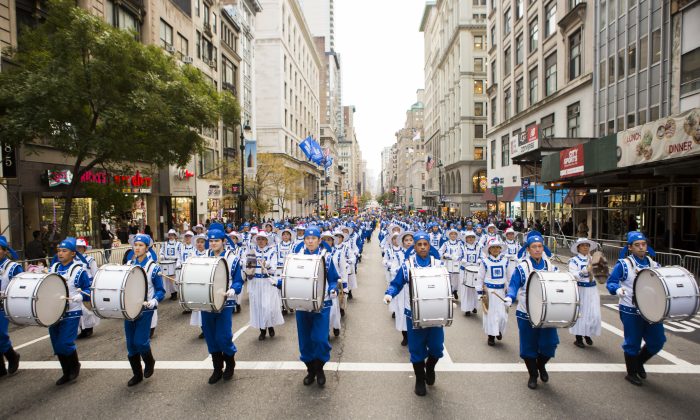 NEW YORK—At first, they seemed out of place in a parade showing appreciation for America’s veterans: a contingent, over 300-strong, of mainly Chinese faces marching down Fifth Avenue as part of the annual Veterans Day Parade. But practitioners of Falun Gong had a message that resonated with the crowd: freedom is not free, and Americans should treasure it.

Leading the Falun Gong contingent was a marching band in white uniform with blue trimmings. About a dozen ladies carrying paper lanterns, dressed in pastel-colored traditional Chinese clothing, followed behind. Floats in the shape of lotus flowers accompanied them. Bringing up the rear was a waist drum group in golden costumes, beating their red waist drums.

“It’s very beautiful,” said Hermin Eusbeio, a New Yorker watching the parade. “The combination of the music and color is very nice.”

In the middle of the Falun Gong contingent, a solemn message: banners calling on the Chinese Communist Party to stop abusing and killing practitioners in China, and to prosecute Jiang Zemin, the former Party leader and chief perpetrator of the persecution.

Maybe the situation might not be as severe as before, but practitioners continue to be arrested.
— Zhu Honda, Falun Gong practitioner

On July 20, 1999, the Chinese regime launched a sweeping suppression of Falun Gong, a traditional Chinese spiritual discipline whose adherents perform slow exercises and abide by the principles of truthfulness, compassion, and tolerance. According to Minghui.org, a clearinghouse for information on the persecution, over 3,900 practitioners were killed, and hundreds of thousands have been incarcerated. Researchers say the regime is harvesting the organs of live Falun Gong practitioners, killing them while making a profit.

Han Yizhe, a supporter of the participants, was sent to a labor camp in her native Guangzhou in southern China in 2001 for petitioning authorities in Beijing to end the persecution of Falun Gong. There, she was subjected to brainwashing and put to forced labor for two years.

Practitioners who tried to do Falun Gong exercises in the labor camp were handcuffed to windows all day, with their feet barely touching ground, Han said. They were then handcuffed to their beds for days.

“For practitioners who refused to abandon their beliefs, guards bound our legs, and stuck posters that denounced Dafa and our Master on our clothes. It was very painful. It was very cruel,” Han said. “Dafa” is a short form of the other name of Falun Gong, Falun Dafa.

Today, Han Yizhe is a school teacher in New Jersey. Karina Li, her 16-year-old daughter, is in high school and plays the clarinet in Falun Gong’s marching band.

“Maybe the situation might not be as severe as before, but practitioners continue to be arrested,” said Zhu Hongda, a practitioner from Shandong Province and a first time participant.

Zhu had participated in a Falun Gong parade in Flushing shortly after arriving in New York in April, and was nearly moved to tears after seeing the police keep the peace—quite unlike the case in China, where police are the instruments of state repression.

America is “such a free society,” Zhu said. “You can freely talk to others and tell the truth to people about Falun Gong.”

Telling the truth about Falun Gong to Chinese tourists in America requires more effort than in China, he said, because they “blindly love China” and cannot “tell the difference between the Party and China.”

Jerry Lam, a marching band member, was so impressed by the band that he signed up in 2006.

Rebecca Mandel was passing by when the Falun Gong marching band caught her attention. Mandel, who works at Samsung, said she had heard about Falun Gong before, and was “sad to hear that the persecution is still going on.”

Falun Gong practitioners in New York have participated in the Veterans Day Parade since 2004. The late Patrick Gualtieri, a Vietnam War veteran who helped the annual event gain prominence after he got involved in 2000, had told Falun Gong to “come stand with us” after learning of the persecution.

Samira Bouaou contributed to this article.