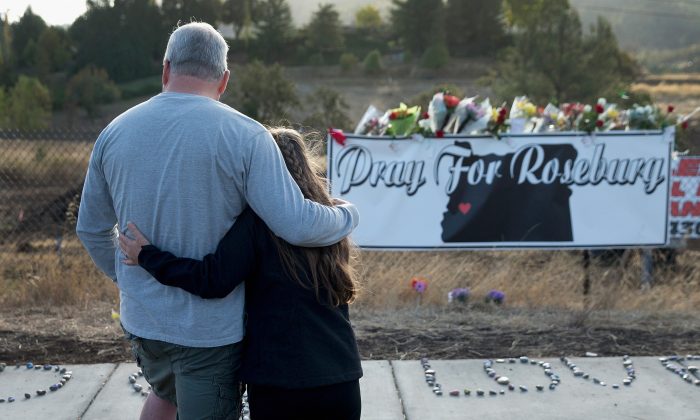 flowers at a memorial along the road to Umpqua Community College on October 3, 2015 in Roseburg, Oregon.
US

In Oregon Visit, Obama Will Find Grief but Also Resentment

ROSEBURG, Ore.—When President Barack Obama arrives here Friday, he will find a timber town still in mourning over the shooting that killed eight community college students and a teacher. But he will also find another deeply held emotion—seething anger over his calls for new gun restrictions.

Only a week after a gunman strode into a writing class and opened fire on classmates, many people in the region known as Oregon’s Bible Belt are quick to reaffirm their opposition to stricter gun laws. At least one parent of a shooting survivor says his family will not meet with the president, although his daughter said she hopes to. And gun-rights supporters plan to protest during Obama’s visit.

“He’s not wanted here. He’s coming here purely to push his garbage, and we don’t want it,” said Michelle Finn, who is helping to organize the protests planned for intersections near the small airport where Obama’s helicopter is expected to touch down.

Staunchly conservative Douglas County is bristling with gun owners who use their weapons for hunting, target shooting, and protecting themselves. A commonly held opinion in this area is that the solution to mass killings is more people carrying guns, not fewer.

A single unarmed security guard was on patrol the day of the shooting. For months prior to the attack, faculty and staff had debated whether to arm campus security officers, but they could not overcome their divisions on the issue.

“The fact that the college didn’t permit guards to carry guns, there was no one there to stop this man,” said Craig Schlesinger, pastor at the Garden Valley Church.

Schlesinger is among the clergy who have been comforting the families of those slain last Thursday by Christopher Harper-Mercer, who had six guns with him on campus and eight more at the apartment he shared with his mother.

Nine other people were wounded, some seriously. The gunman fatally shot himself in front of his victims after he was shot by police.

Sheriff John Hanlin has become a symbol of the region’s rejection of tighter gun control.

Sheriff John Hanlin has become a symbol of the region’s rejection of tighter gun control. After 20 children and six adults were killed in 2012 at Sandy Hook Elementary School in Newtown, Connecticut, Hanlin sent Vice President Joe Biden a letter saying he would never comply with any gun-control law from the Obama administration.

Hanlin, a visible figure at news conferences following the Roseburg killings, has said now is not the time for a debate about gun control.

Immediately after the shooting, Obama said he intended to politicize the Roseburg attack to put pressure on Congress to adopt gun restrictions—a statement that infuriated much of this town of 22,000 people about 180 miles south of Portland.

Some families are divided, even those directly affected by the rampage.

Stacy Boylan, father of shooting survivor Ana Boylan, told Fox News that his family would not attend an event with the president because of Obama’s views on guns.

But Ana Boylan told The Associated Press she would indeed meet Obama if she has a chance to do so in private.

“I do have a few questions and I’d like to see him,” Boylan said. Her mother, Deanna Boylan, said her daughter wants to ask the questions in private, not in a news story.

Trying to tamp down suggestions that Obama would receive a cold reception, Douglas County commissioners released a statement Thursday welcoming him.

“Regardless of our differences with the president on policy issues, we await the president’s arrival and look forward to his show of support” for a grieving community that is enduring “immeasurable” heartache, said Susan Morgan, chairwoman of the commission.

Roseburg leaders also sought to reassure Obama that he is welcome, saying in a statement earlier in the week they would “extend him every courtesy.”

The president has never been popular in this corner of southern Oregon.

The president has never been popular in this corner of southern Oregon. Barely a third of the county voted for him in the last election.

He will not be the first national leader to confront resistance to gun control in Roseburg.

In 1968, while campaigning for the Democratic presidential nomination, Robert F. Kennedy told a hostile crowd that it was too easy for people who should not own a gun to buy one.

“Does that make any sense that you should put rifles and guns in the hands of people who have long criminal records, of people who are insane, or of people who are mentally incompetent or people who are so young they don’t know how to handle rifles or guns?” Kennedy said. He lost the Oregon primary the next day and was fatally shot in Los Angeles less than two weeks later.

The White House says Obama will meet privately with victims’ families. His official schedule shows no indication that he will appear in public and talk about gun control, as RFK did 47 years ago.

Laurie Nielsen, 55, is among those who think Obama should stay away. The way she sees it, the president is coming to exploit the Roseburg shootings for his own political advantage.

“I don’t think he belongs here. Not at this time,” Nielsen said. “It’s really none of his business to be here.”