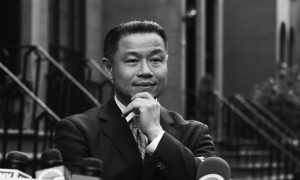 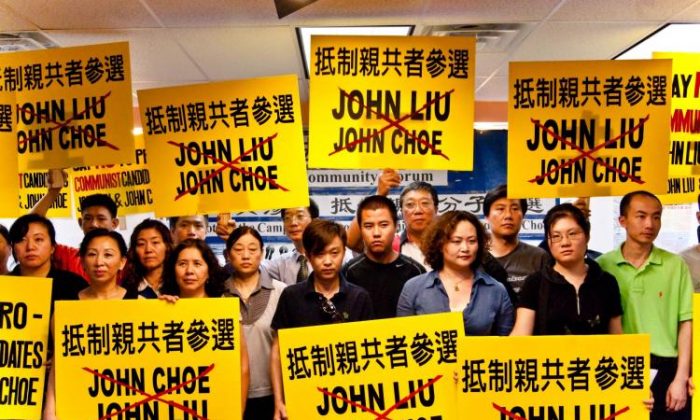 NEW YORK—During a recent forum for state Senate candidates John Liu and incumbent Tony Avella, two protesters unfurled a large banner calling for the arrest of John Liu to “prevent his further harm to the U.S.” An argument then erupted in Mandarin between Chinese people in the room, which lasted close to 10 minutes.

A handmade sign in English held up at the event by a Chinese protester said, “John Liu Is a Swindler,” and another in Chinese said “John Liu Is the Scum of the Earth.”

Liu’s mixed relations with the Chinese community are usually plainly visible during his events. It’s not uncommon to see a few banners warning of his ties to the Chinese Communist Party (CCP).

Liu typically brushes off the protests as issues within the Chinese community—things that we Westerners just don’t get.

“John Liu, among the community, is considered to be someone morally corrupt, and there are many questions regarding his political views,” said Liu Guohua, a Chinese democracy activist and one of the two men who unfurled the banner protesting Liu at the candidate forum.

“People from the Chinese community have a very strong reaction to this issue,” Liu Guohua said. “Friends of mine who are from China don’t like him much.”

“Friends of mine from Taiwan, they told me that they are ashamed of John Liu’s behavior,” he said.

Liu and his family are Taiwanese. Many of his family members are—or have been—part of the Taiwan Center in Flushing, Queens. The association supports Taiwan’s independence.

On July 20, the Taiwan Center held an event supporting Avella, Liu’s opponent. Avella was photographed in front of the center alongside representatives from the Chinese community.

Some pro-Taiwan tong leaders are also supporting Avella’s campaign behind the scenes.

Liu has gotten himself in a bad spot with the Taiwanese community, in particular.

Bor “Bob” Chu, a 71-year-old taxi driver and a volunteer for Avella’s campaign, said he and many other Taiwanese in New York voted for Liu when he became a council member in Flushing.

He said Liu was once close to the Taiwanese community, but that changed when Liu took a trip to China with several pro-CCP tong leaders in 2007.

“When he returned, he didn’t know who he was,” Chu said. “Before, he was very close to Taiwanese officials, and then he stopped participating in any Taiwanese activities.”

“This made the Chinese from Taiwan, the voters, very mad,” he said.

Contention over international politics aside, Chu said he and many other Chinese believe that after Liu got the votes from the community, Liu turned his back on them.

Leaning Toward the Mainland

Liu’s turn toward groups favoring the CCP had broad implications in Chinatown and in Flushing.

Chu said that most of the first-generation Chinese in New York left Mainland China to seek the lives they couldn’t get under communist rule. Many residents originally from Hong Kong and Taiwan are also concerned about the Chinese regime trying to suppress democracy in their homelands.

Many others are acutely aware of the Chinese Consulate’s power over Chinatown and other Chinese communities in New York.

Liu’s trip to China in 2007 wasn’t just a casual visit. He was personally introduced to Xu Yousheng, vice president of the Overseas Chinese Affairs Office. This department is one of the Chinese regime’s two primary offices for foreign espionage, and helps the regime monitor and harass people in overseas Chinese communities.

Many Chinese people in New York took the Chinese regime’s pandering to Liu’s political aspirations as a red flag—pun intended. After the trip, Liu would regularly be photographed alongside the New York Chinese Consulate General Peng Keyu and was frequently featured in reports in China’s official state-run news agencies.

On the outside, a second-generation Taiwanese immigrant coming closer to the Chinese mainland doesn’t come off as odd. But for the people in New York’s Chinese communities, it is taken very seriously.

“Westerners don’t know the CCP’s tricks,” said Zhang Guowei, chairman of the Republic of China Central Military School U.S. Alumni Association. “If a pro-CCP person becomes a mayor or even a congressman, he would support issues that are favorable to the CCP. What would you do then?”

As Liu grew closer to pro-communist tongs, to officials of the Chinese regime, and to the Chinese Consulate, he began distancing himself from parts of the New York Chinese community the overseas regime doesn’t like. These included people who were persecuted in China, democracy activists, and pro-Taiwan tongs.

The tongs with the closest ties to the Chinese regime also began heavily supporting Liu in his political career. The most notable among these is the Fukien American Association, which is often tasked with hosting officials of the Chinese regime when they travel abroad.

According to the Chinese-language World Journal, on June 29 the Fukien Association gave Liu $15,000 for his campaign for state senator.

Xing Wu “Oliver” Pan is the former executive vice chairman of the Fukien American Association. He is also the former fundraiser for Liu’s ill-fated mayoral campaign who was sentenced to four months in prison for attempted wire fraud for Liu’s campaign.

Jia “Jenny” Hou, Liu’s former treasurer who was sentenced to 10 months in prison, also for attempted wire fraud for Liu’s campaign, is the daughter of Hou Jianli, president of the Beijing Township Association.

Hou’s father was among the tong leaders who escorted Liu on his 2007 trip to China.

For many people in the Chinese community, the arrests of Hou and Pan were viewed with deep meaning. They figured the FBI was privy to Liu’s connections to Beijing, and chose Hou and Pan as key people to arrest to send a warning to the systems they’re connected to.

“John Liu is a politician and all he cares about are votes,” said Zhang. “The CCP, meanwhile, is trying to use John Liu because he is Chinese.”