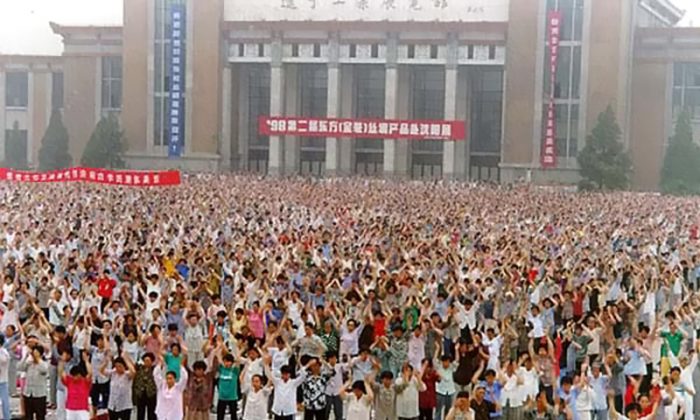 Over 10,000 Falun Gong practitioners perform a standing meditation in China's Liaoning Province in this undated photo. In July 1999 communist party leader Jiang Zemin launched a persecution campaign against the spiritual discipline, which continues to this day. (Minghui.org)
China

In Northern Province, China’s ‘Gestapo’ Seeks to Implicate Others in Persecution

For tampering with his mail and then confiscating it, Li Xifu sued his local post office in the northern Chinese province of Shanxi, in a case heard by a district court on Nov. 9. Nine days later, however, police raided the retired steelworker’s home and sent him to a detention center without trial.

That a 74-year-old retiree would be so brazen as to exercise his legal rights proved to be too much for the 610 Office branch in Heilongjiang, a northeastern province.

On Nov. 16, this branch of the Chinese Communist Party’s Gestapo-like, extralegal organization sent out a four-page memorandum marked “urgent” and “confidential” (the second highest level of classified information in China) to different state agencies and Party committees in Heilongjiang.

The memorandum highlights the case of “obstinate Falun Gong member Li Xifu” and his “duplicitous” attempt to “use legal channels to achieve illegal objectives”—filing a criminal complaint against former Party leader Jiang Zemin. Those who lodged such complaints, the memorandum read, were “going to legal war” with the Party, and the Party should “resolutely guard against this development” and even proactively “nip it in the bud.”

Over 3,900 Falun Gong practitioners have been tortured to death.

But lawyers in China said that the Heilongjiang 610 Office branch has no legal authority to issue such orders to other Party organizations, while Li Xifu had observed the Chinese regime’s law. The memorandum is a recent example of the 610 Office’s attempts to stop a mounting campaign by Falun Gong practitioners of using the regime’s own legal system to prosecute its former leader.

Zhang Zanning, a law lecturer at Southeast University in Nanjing and a practicing attorney, told the Epoch Times that the 610 Office, being a Party body, is limited to issuing orders to Party members. Even then, its orders cannot be executed if they are unconstitutional.

“Thus, any of their orders or instructions to the judiciary and governing bodies have no legal standing, and are all unconstitutional or illegal,” Zhang said.

Minghui.org, a clearinghouse for information about the persecution, has confirmed that over 3,900 practitioners have been tortured to death, although the true number is believed to be several times higher due to the difficulty of getting this information out of China. Hundreds of thousands of others remain incarcerated, according to Minghui.

Researchers also say that since the beginning of 2000, the regime is responsible for harvesting organs from an estimated tens of thousands of Falun Gong practitioners to be used in China’s very profitable transplantation business.

This year, over 200,000 Falun Gong practitioners have submitted complaints calling on the Chinese regime to put Jiang Zemin on trial for crimes against humanity and genocide. The regime’s highest court and procuratorate in Beijing have sent acknowledgement receipts to a bulk of these mailed complaints, after a legal reform in May relaxed the conditions by which complaints can be accepted.

Actually, suing Jiang, or any other organization, is within the legal rights of Chinese citizens.
— Yu Wensheng , human rights lawyer

Beijing’s response to the criminal complaints marks a significant shift from past practice. In August 1999, two practitioners, Zhu Keming and Wang Jie, were arrested after lodging a complaint against Jiang. Zhu was detained for five years and had nine of his teeth knocked out when he was tortured. Wang didn’t survive the injuries he sustained in prison.

Provincial Party authorities across China appear to have adopted different attitudes toward the current wave of lawsuits. Some seem to leave the plaintiffs alone, while in other provinces—so far, the provinces of Gansu, Harbin, Shanxi, and Heilongjiang—have picked off practitioners attempting to file suit, as well as any accompanying human rights lawyers, at the post office, at the local procuratorate, or at their homes.

The authorities in Heilongjiang are particularly hostile toward practitioners who have filed criminal complaints. A recent high-profile case involved Sheng Xiaoyun, the mother-in-law of YouTube star and television journalist Ben Hedges, who had called upon his fans to telephone the police officers responsible for her arrest. She was released after 10 days.

This tough stance in Heilongjiang is no surprise. More Falun Gong practitioners—511—have been killed there during the persecution than in any other province, according to Minghui. Only Hebei and Shandong boast higher numbers than Heilongjiang’s 10,502 total persecution cases.

The 610 Office branch in Heilongjiang is trying to encourage other Party bodies to participate in the persecution of Falun Gong so it wouldn’t be singled out if the persecution is someday overturned, said Yu Wensheng, a human rights attorney with a Beijing law firm, to the Epoch Times.

“Actually, suing Jiang, or any other organization, is within the legal rights of Chinese citizens,” he said.

In fact, “now some public security employees are reluctant to interfere with Falun Gong cases because they know that they could in the future be held responsible” for the persecution, Yu added.

The 610 Office in Tianjin recently gave an order similar to that in Heilongjiang—including the identical language of “strengthen the fight against the excessive false lawsuits by Falun Gong”—in an internal document obtained by the Epoch Times. Whether this indicates that local 610 branches are attempting to proactively stem the tide of lawsuits, or receiving orders from the 610 Office at Party Central, is still unclear.

Correction: An earlier version of this article said Zhu Keming lost all of his teeth during his five year prison stint; he lost nine teeth. Also, Wang Jie passed away a little over a month after being released from jail, not inside jail.