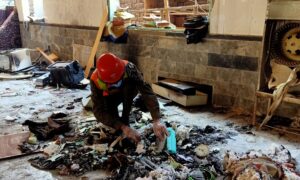 Blast at Islamic School in Pakistan Kills at Least 7 Including Children, 70 Injured
0

In North Korea, Sexual Abuse of Women Is ‘Common’: Report

It appears to be so commonplace in North Korea that it has become accepted as part of ordinary life, HRW said in a news release. The abuses are perpetrated by North Korean men in positions of power, such as party officials, police officers, prison guards, and soldiers.

“What can we do? They consider us [sex] toys. We are at the mercy of men,” Oh Jung-hee, a former trader in her 40s, told HRW. “Sometimes, out of nowhere, you cry at night and don’t know why.”

The report is largely based on the testimonies of 62 North Koreans who have left the country, eight of whom are former officials.

Survivors rarely report cases; many women said that they didn’t report the abuses because they didn’t think it was unusual. The North Korean regime also often fails to investigate complaints, which would often be reported by the victims’ relatives or friends.

“The idea that sexual violence is wrong, that it would not be my fault, that some ‘law person’ could be there to try to protect me could have never even occurred to me while living in North Korea,” sexual abuse victim, Kim Eun A, told HRW.

Women Suffer Sexual Abuse Both Inside and Outside of Police Custody

In the report, titled “You Cry at Night, but Don’t Know Why’: Sexual Violence against Women in North Korea,” HRW interviewed a total of 106 North Koreans (72 women, 4 girls, and 30 men), all of whom had left the country. The human rights group also interviewed other experts and academics familiar with sexual abuse issues in North Korea.

“Interviewees told us that when a guard or police officer “picks” a woman, she has no choice but to comply with any demands he makes, whether for sex, money, or other favors,” HRW said. This applied to women both in prison or in police custody, as well as to women out in society.

Many North Korean women trade goods in order to sustain themselves and their families, according to the report. However, conducting trade in society makes them vulnerable to officials who target them for sexual favors, because the market system in North Korea is regulated according to the local situation, and rules can be interpreted in different ways often subject to the officials or market regulators involved.

“The lack of clear rules or regulations leaves women vulnerable to abuse and exploitation,” HRW said in the report.

“The economic situation in North Korea is really desperate so more and more women take it upon themselves to feed their families and they do it in any way they can. They get involved in trading or smuggling, paying bribes to officials to turn a blind eye,” explained Emma Daly, HRW’s communications director.

“For many women, these ‘bribes’ actually amount to rape or sexual assault. They know that saying no, refusing a demand for sex from an officer means they risk everything. They could lose not just their incomes, their livelihoods, but their freedom, they could be sent to prison camps, to labor camps,” Daly added.

Park Sol Dan, a former trader in her 40s from Kangwon province who left North Korea in 2014, told HRW that it was common to experience or witness unwanted sexual advances from persons on trains like ticket inspectors, police officers, and secret police officials.

In 2012, she once saw a police officer having sex with a female passenger on a train, while passing through the police officials’ carriage.

“When I saw them, I just thought: ‘Poor woman. She is too pretty, or maybe didn’t have enough money to pay a bribe.’ It is impossible this relation is consensual,” Park Sol Dan said.

“When police officers are out on patrol, they see pretty women and try to find something wrong. Even if she has her ID, travel pass, and all the necessary documents, they say ‘oh, this or that is wrong,’ … Offering your body to a police officer is so common. There is nothing else you can do,” she added.

Oh Jung Hee, formerly from Ryanggang province, described to HRW about being sexually assaulted many times.

“On the days they felt like it, market guards or police officials could ask me to follow them to an empty room outside the market, or some other place they’d pick,” she said. “It happens so often nobody thinks it is a big deal.”

The HRW report also acknowledged that gross abuses of women occur in prison or in detention. The researchers were able to interview some survivors who had been raped or sexually abused.

HRW also noted that a 2014 UN report had previously also found that the North Korean regime had been guilty of forced abortions, and rape committed against women in detention and prison.

“In some cases, female inmates are raped using physical force. In other cases, women are pressed into ‘consensual’ sexual relations to avoid harsh labor assignments, or to receive food. Such cases may also amount to rape as defined under international law,” the 2014 UN report said.

To address concerns of sexual abuse against women in North Korea, the report outlined several lists of recommendations tailored toward the North Korean regime, ranging from law reforms to enforcement, to proposed changes in the health sector and education sector to increase awareness about the rights of women and girls. HRW also outlined other action points recommended for surrounding nations, U.N. agencies and International NGO’s.

“North Korean women should not have to risk being raped by government officials or workers when they leave their homes to earn money to feed their families,” Roth said.

“Kim Jong Un and his government should acknowledge the problem and take urgent steps to protect women and ensure justice for survivors of sexual violence.”