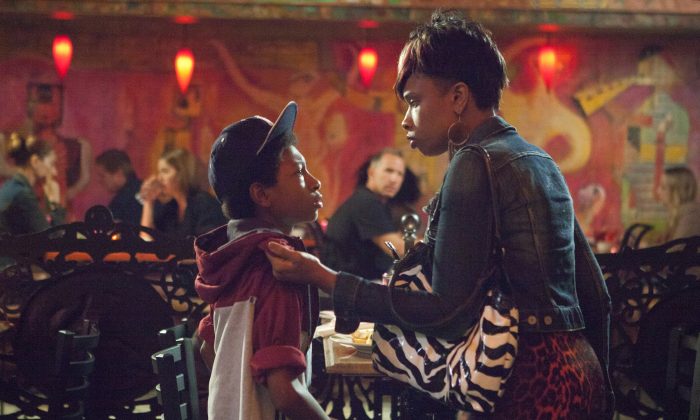 NEW YORK—Set against the backdrop of Brooklyn’s projects, a story of hope and survival begins with two children.

“The Inevitable Defeat of Mister & Pete” focuses on two boys, 13-year-old Mister (played by Skylan Brooks) and 9-year-old Pete (played by Ethan Dizon). The film focuses on how the two face their place in society, their struggles, and their dreams.

Academy Award-winning actress and Grammy Award-winning artist Jennifer Hudson plays Mister’s mother. Her involvement with a drug dealer and her inevitable addiction put a strain on her relationship with Mister, and gets her locked up behind bars.

“I don’t even think maybe Jennifer would expect herself in that role,” said Alicia Keys, executive producer of the film. Keys, Hudson, and director George Tillman Jr. talked about the feature at a press conference in New York on Oct. 2.

“The first time you see her face on camera, you’re shocked,” Keys said about Hudson.

Hudson, who has a 3-year-old son, said her character Gloria was difficult to connect to. Learning the role meant walking away from the set wearing heavy jewelry and tattoos.

“I had to take [the tattoos] home with me some nights,” she said.

When she was preparing at home for her role, Hudson’s son asked her, “Why are you acting like that?”

“Mommy is going to go play a bad mommy,” Hudson had to explain.

Hudson said that she appreciated the film’s take on the struggles of children in such situations.

In disadvantaged communities, there’s a lack of information about choices and organizations like Big Brothers Big Sisters, Keys said.

“I think about a lot of social business, because that’s one of the things I want to continue to evolve in,” she said.

Keys was involved in the film since the beginning, when Tillman’s agency approached Keys’s agency with the idea. She and Mark Isham also composed original music for the film.

“We just wanted to do something that meant something to us,” Tillman said. He and Keys started working on the film five years ago, after writer Michael Starrbury presented them with the script.

Stripping it of all clichés and fairytale endings, Tillman said that he wanted the film to be honest. Keys said that it’s an important piece because it breaks traditional stereotypes.