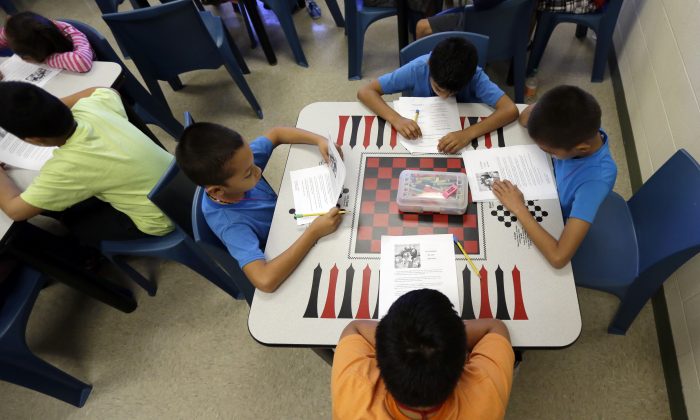 A short story in Spanish is used in a class at the Karnes County Residential Center, a temporary home for immigrant women and children detained at the border, in Karnes City, Texas, Sept. 10, 2014. Unaccompanied minors who reach New York are being met by representatives who help the children register for school and other services. (AP Photo/Eric Gay)
New York

NEW YORK—Paola Flores loves her 13-year-old daughter, Yennifer, so much that she asked her to jump the border from Honduras to New York—arranging for a smuggler to bring her to New York.

“We had to send for our children, they were suffering over there,” Flores, 35, said of her and other parents like her.

She was arrested in 2004 for crossing the border but managed to avoid deportation by skipping her court appearances.

It is not uncommon for Central American parents to leave their young children behind with other family in order to come to work in the United States—sending a large cut of their salaries home to provide for their children.

Most of the children are from Honduras, El Salvador, and Guatemala, and cross the border alone to escape escalating violence in their home countries.

Outside of Texas, New York is the hottest destination for unaccompanied minors arriving illegally, housing a total of 4,244 migrant children. A mayoral press aide estimated that the federal immigration court for New York City sees about 30 migrant children cases per day.

Under Mayor de Blasio’s initiative, which began last week, representatives from the city education and health departments have been stationed at the federal immigration court teaching migrant children about the free services the city offers.

Whether or not a child migrant has a lawyer factors hugely into his or her chances of deportation. Nine out of 10 children were deported if they didn’t have legal representation, according to Syracuse University research. For those children who did have a lawyer, only 50 percent were deported.

“These children have endured unimaginable struggle and danger to come here for the chance at not just a better life, but a chance at life at all,” said Congressman Joe Crowley, in a mayoral press release.

“They are scared and in need, and I applaud the city for welcoming them with empathy and support.”

In addition to health care, these children are also in serious need of mental health services.

Dr. Alan Shapiro, co-founder of immigrant youth clinic Terra Firma, described the trauma of one of his patients: “I had one patient, 15 years old, tell me about how he came home from school with a friend and they were assaulted by a gang. His friend was killed in a very, very violent way.”

Moreover, schools need resources to assist migrant children as they assimilate with students who have not been through traumatic events.

As part of its youth services, the Mayor’s Office of Immigrant Affairs also offers Summer Youth Employment, a program used by youth between the ages of 14 and 24 to find minimum wage jobs, and NYC Ladders for Leaders, which offers jobs in leadership positions.

Democrats in the state Senate have prepared a referendum bill, nicknamed “New York is Home,” that would protect undocumented immigrants from being reported to the federal government, allow them to serve on juries, and apply for professional licenses.

The proposed bill would even allow illegal aliens to vote, but draws the line at local and state elections.

To qualify for such benefits, the immigrants would have to prove that they’ve paid state taxes and have lived in New York for at least three years.

“This issue is a particularly sensitive one with a lot at stake,” said Republican gubernatorial candidate Rob Astorino. “Not only would it increase spending and taxes for already overburdened New York taxpayers, it creates serious security concerns.”

“It helps erase the distinction between legal and illegal immigrants. It sends the message that being here illegally is not really illegal.”

He added, “If New Yorkers who pay the taxes are willing to give their money to illegal immigrant kids for various kinds of welfare programs, they’re free to do that.”

Yennifer’s next court appearance is scheduled for November. Flores says that if her daughter is deported, they’ll return to Honduras together.