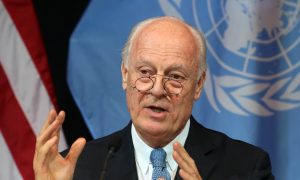 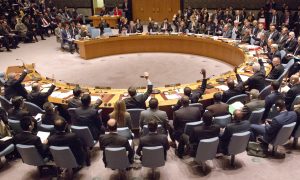 UN Syria Envoy to Start Talks in Geneva Without Opposition
0 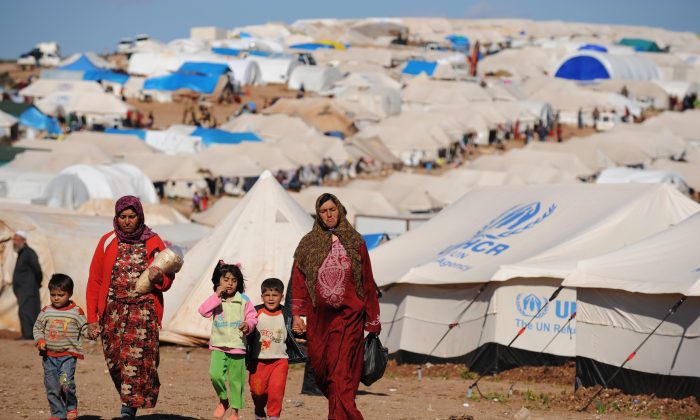 In Mideast Wars, Hunger Grips Millions Across the Region

BEIRUT—In a Middle East torn apart by war and conflict, fighters are increasingly using food as a weapon of war.

Millions of people across countries like Syria, Yemen and Iraq are gripped by hunger, struggling to survive with little help from the outside world. Children suffer from severe malnutrition, their parents often having to beg or sell possessions to get basic commodities including water, medicine and fuel.

The biggest humanitarian catastrophe by far is Syria, where a ruinous five-year civil war has killed a quarter of a million people and displaced half the population. All sides in the conflict have used punishing blockades to force submission and surrender from the other side — a tactic that has proved effective particularly for government forces seeking to pacify opposition-held areas around the capital Damascus.

Since October, Russian airstrikes and the start of yet another winter have exacerbated a humanitarian crisis and led to deaths from starvation in some places.

Humanitarian teams who recently entered a besieged Syrian town witnessed scenes that “haunt the soul,” said Secretary-General Ban Ki-moon. He accused both the government of President Bashar Assad and the rebels fighting to oust him of using starvation as a weapon, calling it a war crime. Although sieges are an accepted military practice that are often carried out by forces seeking to avoid intense urban conflict, the conduct of forces carrying them out and their behavior toward civilian populations are regulated by international humanitarian law. Past cases include the sieges of Gorazde and Sarajevo during the Bosnian war. The Hamas-ruled Gaza Strip, home to 1.8 million people, has also been under an Israeli and Egyptian blockade, restricting the flow of many goods into the war-torn Palestinian territory.

The U.N. and aid agencies have struggled with funding shortages and growing impediments to the delivery of humanitarian assistance despite Security Council resolutions insisting on the unconditional delivery of aid across front lines.

In Yemen, the Arab world’s most impoverished nation, nearly half of the country’s 22 provinces are ranked as one step away from famine conditions.

Here’s a look at major areas in the Middle East under siege or suffering starvation:

The United Nations estimates more than 400,000 people are besieged in 15 communities across Syria, roughly half of them in areas controlled by the ISIS group. In 2014, the U.N. was able to deliver food to about five percent of people in besieged areas, while today estimates show the organization is reaching less than one percent.

In 2015, the World Food Program was forced to reduce the size of the food rations it provides to families inside Syria by up to 25 percent because of a funding shortfall. The agency says it has to raise $25 million every week to meet the basic food needs of people affected by the Syrian conflict.

Some of the hardest hit blockaded areas in Syria are:

Madaya: A town northeast of Damascus with a population of 40,000. The town has been besieged by government and allied militiamen for months and gained international attention after harrowing pictures emerged showing emaciated children. Doctors Without Borders says 28 people have died of starvation in Madaya since September. Two convoys of humanitarian aid were delivered to the town last week. Aid workers who entered described seeing skeletal figures; children who could barely talk or walk, and parents who gave their kids sleeping pills to calm their hunger.

Fouaa and Kfarya: Two Shiite villages in the northern province of Idlib with a combined population of around 20,000. The villages have been blockaded by rebels for more than a year. Pro-government fighters recently evacuated from the villages describe desperate conditions there with scarce food and medicine, saying some residents are eating grass to survive and undergoing surgery without anesthesia. Aid convoys entered the villages simultaneously with the aid to Madaya after months-long negotiations between the government and armed groups.

Deir el-Zour: An estimated 200,000 people living in government-held parts of this city in eastern Syria are besieged by the Islamic State group. The U.N. says most of the residents are women and children facing sharply deteriorating conditions due to the ban on all commercial or humanitarian access, as well as the inability of residents to move outside of the city. While government stocks continue to provide bread, there are severe shortages of food, medicine and basic commodities. Opposition activists say they have documented the death of 27 people from malnutrition. Water is available only once a week for few hours.

The humanitarian situation has dramatically deteriorated, nearly 300 days after the Saudi-led coalition began its air campaign aimed at driving Yemen’s Shiite rebels from cities under their control. Coalition naval ships are blockading traffic in Yemen’s ports and rebels are besieging several areas, particularly the southern city of Taiz.

Some 14.4 million Yemenis, more than half of the population, are food insecure, an increase of 12 percent in the last eight months, the U.N.’s Food and Agriculture Organization said Thursday. In late December, the WFP said 7.8 million of Yemen’s 24 million people are in even more dire condition, “facing life-threatening rates of acute malnutrition,” up by more than 3 million in less than a year. It said 10 of the country’s 22 provinces are in “the grip of severe food insecurity” at the “emergency” level, one step short of famine on the agency’s 5-level scale of food security.

In Taiz, with a population of about 250,000, residents have been going hungry for weeks, the WFP said. The United Nations humanitarian coordinator for Yemen Jamie McGoldrick said recently that basic services in Taiz are scarce, including access to water and fuel.

The severe shortage of food, fuel and medicine across Yemen led to an increase in the number of children suffering from malnutrition while the destruction of health facilities treating them led to deaths.

Some 3 million children under five years require services to treat or prevent malnutrition, according to a UNICEF report on Jan. 13.

Massive population shifts in Iraq due to violence has made it more difficult for millions of people to access food, medicine and safe drinking water. More than 3 million Iraqis are displaced within the country by violence and instability. “They’ve lost their livelihoods, their jobs, and hunger and the inability to purchase food is a reality in their everyday life,” said Marwa Awad, with the World Food Program. In total 8.2 million Iraqis are in need of humanitarian assistance: food, water, shelter or medicine, she said.

Ongoing violence in many of Iraq’s provinces that are also home to people who have been uprooted by conflict is of the greatest concern, Awad said. In Anbar, Ninevah and Salahuddin the price of food has risen by as much as 38 percent in the last month, and in some cases the Iraqi government has had to airlift families out of towns and villages besieged by fighting between Iraqi government forces and Islamic State group fighters.

In Ramadi, families who had been held by IS fighters as human shields said they survived for days on just rice and flour.

While conflict in Iraq hasn’t led to cases of starvation, Awad said WFP has seen an increase in cases of malnutrition as people eat less to conserve the little food they do have.

According to the U.N. children’s agency, malnutrition is a major threat among millions of refugees. A UNICEF report last year showed that almost 2,000 Syrian refugee children in Lebanon are suffering from severe acute malnutrition, and need immediate treatment to survive. It warned that situation could deteriorate even further as malnutrition is linked to such factors as poor hygiene, unsafe drinking water, lack of immunization, diseases and improper infant and young child feeding practices.