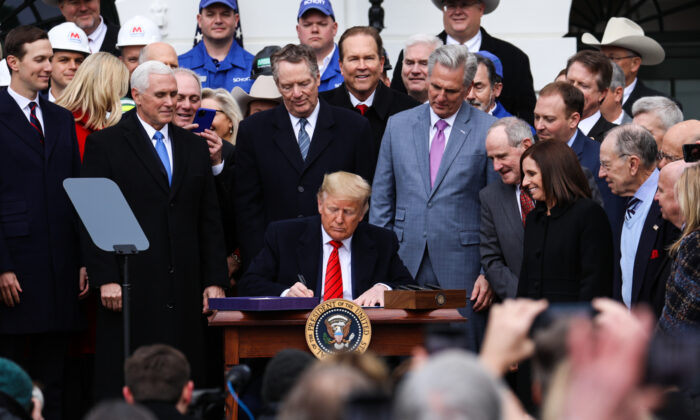 President Donald Trump signs the United States–Mexico–Canada Agreement, known as USMCA, during a ceremony on the South Lawn of the White House on Jan. 29, 2020. (Charlotte Cuthbertson/The Epoch Times)
Trump Presidency

“It’s been a long time. … Everyone said it was a deal that could not be done,” said Trump during a signing ceremony at the White House, saying that the measure would end the “NAFTA nightmare,” referring to the 26-year-old North American Free Trade Agreement.

“This is a colossal victory for … American workers in all 50 states” and “beyond,” the president said, adding that he is primarily “fighting for the American worker.” He noted that the USCMA is the first trade deal in nearly 20 years that’s been supported by the AFL-CIO, the largest trade union in the United States.

Trump said during his 2016 campaign that coming up with a new deal to replace NAFTA, which was signed during the Clinton administration, would be one of his priorities, and he will likely be pointing out its replacement at campaign events in the coming months. Since he assumed office, the president has sought to highlight the improving U.S. economy and the record-setting stock market.

“We are doing better than any country, and it’s not even close,” Trump said before he signed the measure.

The USMCA must be approved by Canada before it can finally take effect, while Mexico’s Parliament has already approved the deal. Earlier this month, the Senate approved the measure 89–10, and in December 2019, the House passed the bill one day after voting to impeach the president.

“Therefore, I ask that all of us in this place work together as colleagues to put Canada and Canadians first and to pass this legislation without undue delay,” she said this week, reported the CBC.

On Jan. 29, Canadian Prime Minister Justin Trudeau said, “This is something we are going to work on,” noting that there will be “pressure on Canada from both Mexico and the United States.”

According to the White House, the USMCA would create some 76,000 automotive jobs in the United States while triggering billions of dollars in new investments in the industry. Officials said last spring that the deal already helped stimulate billions in new auto investments, including from Fiat Chrysler, Ford, General Motors, Toyota, and Volkswagen.

In 2019, the U.S. International Trade Commission (ITC) stated the deal would boost the American economy by $68.2 billion and add about 176,000 new jobs. It noted that the deal would be “moderate” in light of other trade agreements between the United States, Canada, and Mexico.

In the signing ceremony, Trump said the measure would add potentially 1.2 percent to the U.S. gross domestic product. He also gave a shout-out to about two dozen Republican lawmakers who helped push the deal through Congress.

“Because NAFTA has already eliminated duties on most qualifying goods and significantly reduced nontariff measures, USMCA’s emphasis is on reducing remaining nontariff measures on trade and the U.S. economy,” the ITC report stated.

But the agency stated that “the agreement would likely have a positive impact on all broad industry sectors within the U.S. economy” while “manufacturing would experience the largest percentage gains in output, exports, wages, and employment.”

The White House was able to obtain bipartisan support for the measure by adding in labor protection clauses and removing patent protections for certain drugs. The deal dictates that a greater percentage of vehicles be made from parts manufactured in North America and requires at least 40 percent of auto production be done by workers who earn $16 per hour or more. The United States would also gain greater access to Canada’s agriculture market.

“Along with members of Congress, state and local leaders, and workers from across the country, including farmers, ranchers, and entrepreneurs, President Trump will celebrate another promise made, promise kept to the American people,” White House spokesman Judd Deere said in a statement on Jan. 29.

“USMCA rebalances trade in North America, replaces the job-killing NAFTA, ends the outsourcing of American jobs, and invests in the American worker,” he said.