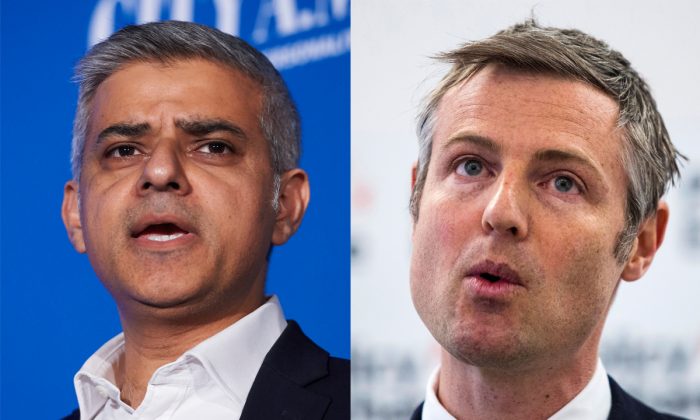 LONDON—One is a bus driver’s son who grew up in social housing, the other a billionaire’s son raised in a mansion. They are two very different London success stories, and one is about to become the city’s next mayor.

The contrast between Sadiq Khan of the Labour Party and Conservative candidate Zac Goldsmith is resonant in a booming city where rocketing rents and property prices are squeezing out the middle class and increasing extremes of poverty and wealth.

But the election on Thursday has been overshadowed by allegations that Khan, who is Muslim, has links to extremists—and counterclaims that Goldsmith is trying to frighten and divide voters in one of the world’s most cosmopolitan cities.

Goldsmith has used words such as “radical” and “dangerous” to describe Khan, and said in a campaign speech that his opponent had given “platforms, oxygen and even cover—over and over again—to those who seek to do our police and capital harm.”

Steel Is Just Another Tipping Point for Britain’s Unbalanced Economy

Khan fought back, vowing to be “the British Muslim who takes the fight to the extremists” and accused Goldsmith of running a “nasty, dog-whistling campaign.”

Khan says before he entered politics he was a human-rights lawyer and sometimes shared platforms with people whose views he opposed. His team has produced photos of Ghani with Goldsmith and other senior Conservatives, and pointed out that Khan helped remove Ghani as the imam of a London mosque because of his radical views.

The spat has left a sour taste in a multicultural metropolis where more than 1 million of the 8.6 million residents are Muslims. Goldsmith has been accused of heightening tensions in a city where authorities have foiled several Islamic extremist terrorist plots since suicide bombers killed 52 people on the London transit system in July 2005.

100 Cameras Were Given to Homeless in London. The Results Left Everyone Mesmerized

Tony Travers, a local government expert at the London School of Economics, said “British politics is used to robust exchanges and accusations,” but Goldsmith’s tactics have left some people feeling uneasy.

They may also backfire. Despite the allegations, 45-year-old Khan is bookies’ and pollsters’ strong favorite to win Thursday’s election and become London’s first Muslim mayor.

In the final week before the vote, Khan’s campaign has been tinged by claims Labour has a problem with anti-Semitism, inflamed when a former London mayor, Ken Livingstone, claimed that Adolf Hitler had supported Zionism before he came to power. Khan quickly condemned the remarks but said his chances of winning have been damaged.

The winner will be only the third mayor in the city’s modern history; the post was established in 2000. The two previous office-holders were left-wing Labour politician Ken Livingstone and Conservative attention-grabber Boris Johnson.

Both Goldsmith and Khan are born-and-bred Londoners. Khan grew up with seven brothers and sisters in a three-bedroom social-housing apartment, the son of a bus driver and a seamstress from Pakistan. He practiced law before being elected to Parliament in 2005, representing the area where he grew up.

London “is the greatest city in the world. It gave me the helping hand I needed to fulfill my potential,” Khan told voters at a recent rally.

Pigeons in London Are Monitoring the City’s Air Quality

Goldsmith, 41, said his family is “as diverse as this great city.” He has Jewish ancestors who fled fascism in Europe, and his financier father James Goldsmith was both a French member of the European Parliament and an anti-EU British politician. And he has Muslim nephews—his sister Jemima is divorced from Pakistani cricketer-politician Imran Khan.

Goldsmith attended the elite boarding school Eton until he was expelled for marijuana possession. A lifelong environmentalist, he edited the Ecologist magazine—owned by his uncle—before being elected to Parliament in 2010.

For many voters, Goldsmith’s barbed attacks on Khan are a distraction from the most important election issue: housing. Europe’s largest city is growing increasingly unaffordable for many of its residents. The average London home price is 530,000 pounds ($770,000), 10 times the average annual household income.

Sky-high house prices are a sign of the city’s success. London’s financial district attracts the world’s billions, and the city’s homes draw wealthy buyers from China, Russia and other countries looking for a safe haven for themselves and their money.

And after decades of post-World War II decline, London’s population is growing fast—due in part to migration from other countries in the 28-nation European Union, whose citizens have the right to live and work in Britain.

Unrestricted immigration is a major issue in another big vote that looms—Britain’s June 23 referendum on whether to stay in the EU—and a vote to leave the bloc could have a huge impact on London. Goldsmith advocates leaving and Khan wants to remain, but the issue has played little part in the mayoral campaign.

Despite their differences, the two candidates agree on the need to tackle the cost of housing and on the other major challenges facing the city: crime and terrorism, overburdened transport and persistent air pollution.

Both have promised to build 50,000 new homes each year, double the current rate.

At a recent rally, Khan said he would give Londoners “first dibs for homes, rather than investors from the Middle East and Asia.” Goldsmith agreed that London had “a housing crisis for a generation” but said “we have to be honest about how difficult it will be to solve it.”

Solving the housing riddle is easier said than done in a city where land is at a premium and a legally protected green belt limits suburban sprawl.

London’s mayor controls a 16 billion-pound ($23 billion) budget, but has less authority than their counterparts in New York or Paris since they share power with the city’s 32 boroughs and financial district.

But if there is no solution, London risks losing residents like Madi Simpson, a 36-year-old mother of three young children. She and her husband have moved four times in six years in the struggle to find an affordable home. They have a solid middle-class income but still spend half of it on rent.

“We’re clinging on to London because our church community is here, our families are here,” she said. “I don’t want to see London hemorrhage families and young people. I don’t want a piece of real estate—I want a home.”