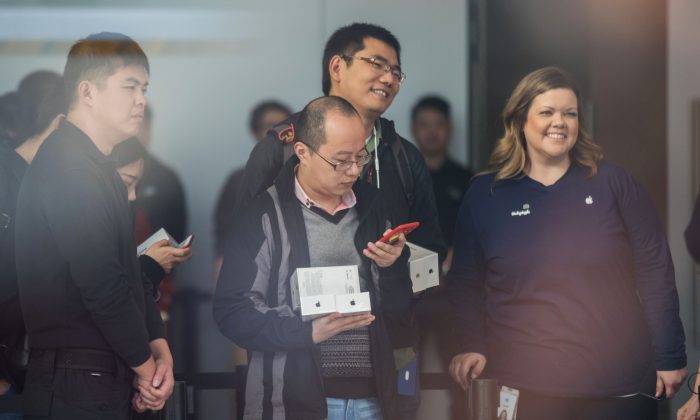 Chinese customers line up at the Apple store while a foreigner Apple staffer stands nearby, in Hangzhou City, Zhejiang Province on November 3, 2017. (STR/AFP/Getty Images)
Chinese Regime

In Latest Move to Gain Global Edge, China Attempts to Lure Foreigners in Science and Tech With New Visa Program

China is aggressively trying to recruit talented foreigners in the science and technology fields to come live and work in the country, this time with a newly unveiled visa program.

To fit the needs of China’s economic and social development, “foreign high-end talent” such as scientists and entrepreneurs will be eligible for the program, reported Xinhua, the Chinese regime’s official news agency, on Jan. 4.

They will receive a 5- or 10-year multiple-entry visa, which will allow them to stay up to 180 days at a time. The application is free and can be processed as quickly as one day. Spouses and children will receive the same visa.

In an ambitious bid to become the world leader in advanced technology, the Chinese regime already has initiated recruitment programs to attract Chinese nationals and foreigner workers to China’s science and technology sector, with a package that includes guaranteed employment at a Chinese university, research institute, or state-owned enterprise; a cash bonus of up to 5 million yuan (about $770,000); and a research subsidy.

This latest visa program makes living and working in China even easier for the talent being recruited.

Chinese newspaper Beijing News reported that the first “foreign high-end talent certificate” was issued to Microsoft Asia-Pacific human resources director George Sajualumootil, who said he frequently travels to China for business. The certificate is a requirement for receiving the visa.

Two others also received the certificate: Chong Gu, a professor of statistics at Purdue University, and Lucio Soibelman, a professor at the University of Southern California’s engineering school.

On the other hand, visas are often denied to foreign journalists and academics who are outspoken critics of the Chinese regime, among them Perry Link, a China expert at Princeton University who sympathized with student protesters during the 1989 democracy movement, and Paul Mooney, a journalist who has reported on Tibet, Xinjiang, and social injustices that have occurred in China, among many others.