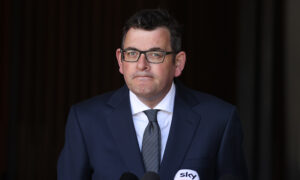 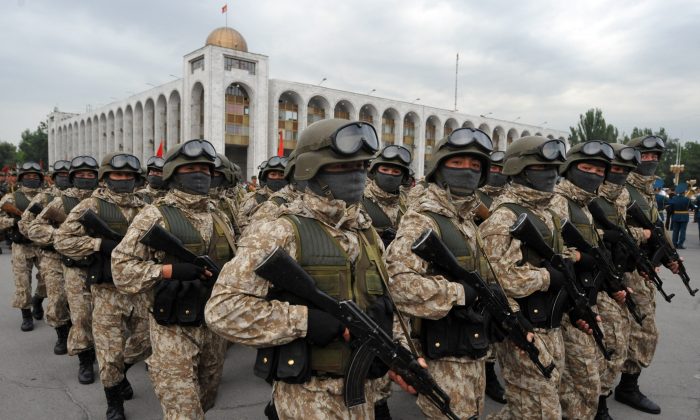 Kyrgyz soldiers march during celebrations of the 22th anniversary of the Kyrgyz millitary forces at the central Ala-Too Square in the Kyrgyzstan's capital Bishkek on May 29, 2014. (Vyacheslav Oseledko/AFP/Getty Images)
Asia & Pacific

Recently, Kyrgyzstan commemorated the fourth anniversary of the violence that shook its southern part back in 2010. Back then, over 100,000 Uzbeks had to leave Kyrgyzstan and seek refuge in Uzbekistan in the aftermath of the riots.

It all started as a simple brawl between groups of Kyrgyz and Uzbek youngsters in a casino in the city of Osh. Shortly thereafter, it took the form of a full-fledged ethnic violence. Many issues were highlighted by the incidents of 2010: Kyrgyzstan’s ever-subtle struggle for power and resources between the elites of Bishkek and their southern counterparts from Osh and Jalalabad, and the acute economic inequality between different communities, especially in the southern region of the country.

April 2010 witnessed a revolution in Kyrgyzstan that eventually led to the elimination of the then President Kurmanbek Bakiyev. Since Bakiyev was a southerner, the Kyrgyz elites of the north saw this as an opportunity to re-establish their control over the country, and for that matter, they sought and gained support from the Uzbek community too.

The modus operandi here was simple: one side of the fence sought and gained support from the minority, whereas the other side inculcated nationalist feelings and viewed the minority as a disloyal diaspora.

Unfortunately, this intra-state fight soon evolved into inter-communal violence. Human Rights Watch reported that hundreds were killed, and over 400,000 people were displaced, and the role of the police and state machinery was not praiseworthy. Had monetary interests not been at stake (Osh is one of the major drug hubs of Central Asia, and serves as a key point for Afghan heroin on its way to Europe and Russia), the violence would have taken even greater casualties in south Kyrgyzstan.

As a matter of fact, the surge in Kyrgyz nationalism has singled out the Uzbeks as culprits of the violence, and even the country’s judiciary has pronounced the Uzbek minority lacking of patriotism.

On a more positive note, the current President, Almazbek Atambayev, has noticed the widening gap between the different sections of the society, and he has been trying to keep things together. In fact, in April 2013, President Almazbek convened a “Concept on strengthening national unity and inter-ethnic relations in the Kyrgyz Republic”, aiming to promote nationalism as well as multilingualism coupled with reconciliation between the Kyrgyz and Uzbek masses.

However, the said concept has not achieved many concrete results. For instance, the scars of the 2010 violence are still fresh, and mutual suspicion between people still affect the harmony of Kyrgyzstan. Amidst all this, the elites of both the northern and southern Kyrgyzstan are preparing for the upcoming Parliamentary Elections (scheduled to be held in 2015) as well as the Presidential Elections (to be held sometime in 2017). Quite obviously, appealing to nationalist sentiments can offer political impetus, and as such, ethnic hostility does not seem to be fading away anytime soon.

On the occasion of the fourth anniversary of the 2010 violence, the Grand Mufti of Kyrgyzstan, Maksatbek Hajji Toktomushev, made a welcome gesture by urging all clerics of the country to focus their sermons on mutual reconciliation and harmony.

It is obvious that Kyrgyzstan’s current atmosphere of impunity is alienating the masses from each other. For the betterment of Central Asia in general and Kyrgyzstan in particular, both the Kyrgyz and Uzbek people need to reconcile their differences and move forward towards peace and unity.

Sufyan bin Uzayr is the author of “Sufism: A Brief History.” He writes for several print and online publications, and regularly blogs about issues of contemporary relevance at Political Periscope.