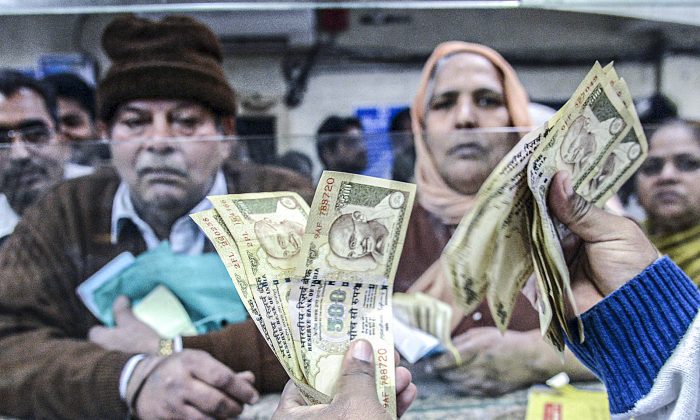 In India, Support for Currency Ban Holds Despite Hardships

Following the announcement last November that 86 percent of India’s currency would be invalidated to help curb corruption, support for the policy has largely held, including among the country’s poor.

Overnight, the country’s 500 and 1,000 rupee notes, worth about $7 and $15, would no longer be accepted as valid currency. About 86 percent of the country’s money was removed from circulation.

In the days following the announcement, millions of Indians queued outside banks and ATMs, hoping to deposit worthless bills before the ban came into full effect at the beginning of this month. Many criticized the policy, saying it disproportionately affected India’s poor without targeting its intended demographic: high-net individuals suspected of evading taxes on the black market.

But by framing the policy as a fight against corruption in India, support for Modi has largely held, including among the country’s poor, who rely largely on informal cash-based transactions for survival.

“It is historic that both the people and the government are on the same side in this battle against evil,” Modi said in an address on New Year’s Eve, which focused on demonetization. “In this fight against corruption and black money, it is clear that you wish to walk shoulder to shoulder with us.”

Elected in 2014, Modi, who comes from humble roots as a former chai wallah, or tea seller, is viewed by many as a crusader against government ineptitude. In nearly three years governing the world’s largest democracy, he has overseen sweeping policy changes in India’s business sector, which has historically been bogged down by a sprawling bureaucracy.

Last summer, the Indian government announced changes to rules governing foreign investment, clearing a path for businesses like Apple and Ikea to open retail stores in the country. About a month later, Modi led a restructuring of the country’s complicated tax codes.

But demonetization, which was kept secret from all but a few of the prime minister’s advisers, could mark Modi’s first major test. His party, the Bharatiya Janata Party (BJP), is facing important elections next month in India’s most populous state, Uttar Pradesh.

Reports of the policy’s popularity have been encouraging. Following the announcement, a survey on a state-run application found that 93 percent of 500,000 respondents supported the move. This month, a poll conducted by Axis India among voters in Uttar Pradesh found that 76 percent of people supported the measure.

A Pew report released last September showed that support for the prime minister was already high. About 81 percent reported having a favorable opinion of him.

While the rich suffered to dispose of excess cash, the poor suffered to exchange their own money.
— Sagar Kumar Gupta, street vendor

Across New Delhi, India’s capital city of around 20 million people, some residents said they were willing to weather the hardships as part of a broader struggle against the elite.

In the neighborhood of Lajpat Nagar, home to a busy market, Sagar Kumar Gupta, 20, who sells pineapple on the side of the road, said he took comfort in knowing that those with illegal cash stores were being punished.

“I haven’t seen a lakh of rupees in my life, so I can’t even fathom that people hold millions and billions of rupees, which are being seized,” said Gupta. A lakh is about $1,500.

“It would be wise to say that everyone suffered,” he said. “While the rich suffered to dispose of excess cash, the poor suffered to exchange their own money.”

In the days after the ban was announced, Gupta said he spent several days waiting outside a bank to exchange the little cash he had. Though his business initially suffered, sales have mostly rebounded, he said.

But not all Indians have been as enthusiastic.

From the small restaurant where she sells curry and roti, an Indian flatbread, Veena Madan, 65, wiped tears from her face as she reflected on the last two months.

Supporting three sons and a daughter-in-law, Madan said her restaurant, which she has run for 45 years, is using only nine pounds of flour a day, down from the usual amount of 22. With many of her customers unable to pay for food with cash, Madan has been forced to provide meals on credit.

“The market is at an all-time low. We’re not getting any customers. It’s all barren,” she said. “People die once, but a street vendor has to die everyday.”

Following demonetization, damage to India’s economy has been widespread.

A report released by the All India Manufacturers’ Organisation (AIMO) found that revenues in micro-small scale industries dropped by 50 percent since November, with job losses in those industries projected to reach 60 percent before March.

The International Monetary Fund forecasts that China will overtake India as the world’s fastest growing economy at least temporarily, in part because of demonetization. In January, the IMF shaved a percentage point off India’s projected growth rate primarily due to “cash shortages and payment disruptions.”

But despite a drop in business, Guddu Singh, 39, a rickshaw driver, said he was onboard with the changes for now.

“It’s good in the long run,” he said, referring to the policy. “I’m earning less than I used to, but it will get better. It will eradicate black money.”