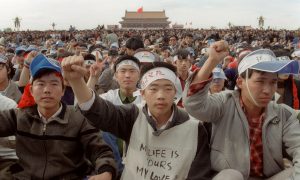 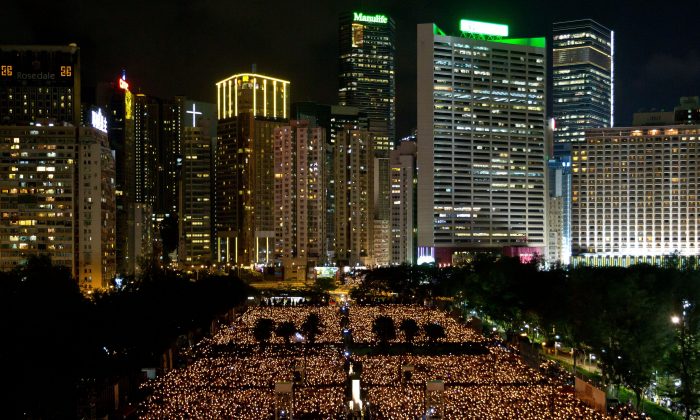 People take part in a candlelight vigil in Hong Kong on June 4, 2015, to mark the crackdown on the pro-democracy movement in Beijing's Tiananmen Square in 1989. (Dale de la REY/AFP/Getty Images)
China

HONG KONG—Tens of thousands of Hongkongers joined a candlelight vigil Thursday to mark the suppression of the 1989 student-led Tiananmen Square protests, an annual commemoration with new meaning for the city’s young after a year fighting Beijing.

For the first time in the vigil’s quarter-century history, some student groups didn’t take part and instead held their own memorials, a sign of an emerging rift between young and old over Hong Kong identity that took root during last year’s pro-democracy protests, known as Occupy Central.

The vigil is the only large-scale public commemoration of the victims on Chinese soil, and the Tiananmen events remain a taboo topic on the mainland. Hundreds and possibly thousands of unarmed protesters and onlookers were killed when tanks and soldiers entered central Beijing on June 3–4, 1989, to put down the student-led protests.

“June 4 and Occupy Central are very similar… we are all students, and we are pushing for democracy and freedom.”
— Otto Ng, Student

Organizers estimated 135,000 people turned out Thursday while police put the figure at 46,600.

“June 4 and Occupy Central are very similar,” said Otto Ng, a 19-year-old student who attended for the first time. Ng said he hadn’t known much about the events in Tiananmen Square but tried to learn more after last year’s Hong Kong protests erupted.

In both cases, “we are all students, and we are pushing for democracy and freedom,” he said.

Eva Leung, 16, also turned out for the first time.

“This evening’s vigil adds to our desire to have a genuine democratic system,” she said. Because of the Occupy Central protests, “I came to know what democracy is, and what was happening in Hong Kong. And it made me come to this evening’s vigil.”

The student-led movement caught the world’s attention last year when activists occupied city streets for 11 weeks to protest the Hong Kong government’s plans to screen all candidates in future elections for the territory’s top leader. The protests ended without the government addressing their demands.

As in previous years, Hongkongers gathered in Victoria Park, holding candles aloft and calling for the Chinese government to overturn its stance that the Tiananmen Square protests were a counterrevolutionary riot.

Hong Kong became part of China in 1997 after a century and a half as a British colony but maintains freedom of speech and other civil liberties not seen on the mainland.

Vigil leaders laid a wreath at a makeshift memorial as the names of Tiananmen victims and their grieving parents were read out. Participants then bowed three times and observed a minute of silence.

This year, some in the crowd held up yellow umbrellas, which became a symbol of last year’s movement when protesters used them to deflect police pepper spray. The crowd also sang along to the movement’s unofficial anthem.

Organizers called on people to join a protest march to government headquarters on June 14 to rally against the government’s electoral reform package, which it plans to submit for lawmaker approval later this month. Local news reports have said more than 7,000 police will be deployed to deal with protesters.

“We must change China before China changes us.”
— Lee Cheuk-yan, Hong Kong legislator

Speakers stressed the need to continue fighting for democracy in China — one of the guiding principles of the vigil’s organizer, the Hong Kong Alliance in Support of Patriotic Democratic Movements in China, originally established to support the students protesting in Beijing. But this year there’s disagreement by some student groups, which have opted out of the vigil because they don’t feel the goal is realistic.

The Hong Kong Federation of Students, a coalition of universities that was one of the driving forces behind the Occupy protests, also opted not to take part. The group has been hit by turmoil over its leadership during the protests, and this year half of its eight university group members voted to leave.

Billy Fung, president of Hong Kong University’s student union, which was holding its own event on campus, said the group wants to focus on establishing genuine democracy in Hong Kong first.

The rival events reflect growing divisions in Hong Kong after the last year’s protests ended without a satisfactory resolution.

Fung said the Hong Kong protests reinforced the sense of a separate Hong Kong identity for young people, who he said now “will question if it is their responsibility to help establish the development of Chinese democracy.”

However, lawmaker Lee Cheuk-yan, who is secretary of the Hong Kong Alliance, said it’s impossible to keep it a separate issue.

“We must change China before China changes us,” he said.