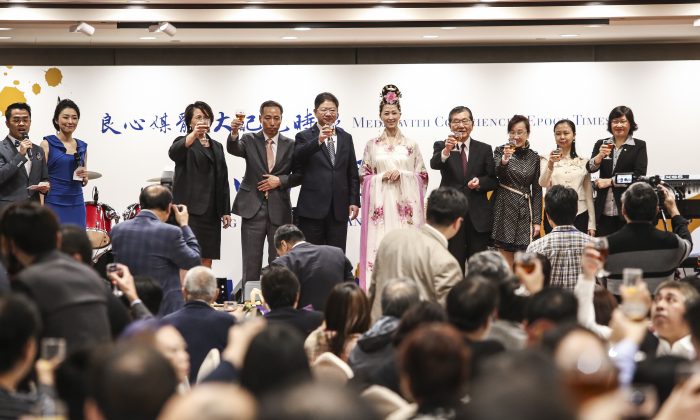 The night’s festivities included well-wishes and speeches in praise of Epoch Times by guests, a solo violin performance by a concertmaster from the New York-based Shen Yun Symphony Orchestra, and an exhibition of flowing, elegant Tang dynasty Hanfu, or Chinese couture.

Epoch Times was founded in 2000 in the basement of a house in Atlanta by John Tang, then a doctoral student at Georgia Tech. Dismayed that Chinese and Western media in the United States were carrying unfiltered the Chinese Communist Party’s hate propaganda against Falun Gong, a traditional Chinese self-cultivation practice, Tang and other Chinese graduate students founded the newspaper with the aim of providing uncensored news about China.

Today, Epoch Times is published in 35 countries and in 21 languages worldwide. In 2014, the English and Chinese editions of Epoch Times, and New Tang Dynasty Television in New York became subsidiaries of Epoch Media Group, of which John Tang is the CEO.

In Hong Kong, Tang expressed his gratitude to readers for supporting the newspaper in the face of pressure from the communist regime.

“We firmly believe that, in the near future, Epoch Times will expand from Hong Kong to mainland China,” he said. “Hopefully China will one day embrace democracy and freedom.”

Guo Jun, the president of Epoch Times in Hong Kong, said in her speech that Epoch Times sources and predictions were accurate, far ahead of time, on the purge of former Chongqing Party boss Bo Xilai and former Chinese regime security czar Zhou Yongkang, and that she expects further significant political changes in the future.

Jin Zhong, the editor of Hong Kong’s Open Magazine and an expert on China issues, said the fact that Epoch Times has not only survived but thrived in its 15 years in Hong Kong’s grinding media industry had moved him deeply.

“I’ve seen the successes and failures of many media agencies, and it’s not easy to succeed,” he said, adding that overseas and mainland Chinese media are increasingly censoring their news on China.

In contrast, “Epoch Times is at the forefront” of reporting on the Chinese Communist Party’s corruption and factional struggles, said Jin. He likened the paper’s grasp of Chinese elite politics to “a beacon in the fog.”

Ching Cheong, a veteran journalist who was once detained by the Chinese regime for three years for alleged espionage, called “Nine Commentaries on the Chinese Communist Party” (which is a series of editorials by the Epoch Times that has been published as a book) the “most complete, most theoretically competent treatise” on the communist regime. He encouraged attendees to read it.

Anastasia Lin was set to display her gorgeous Canadian-designed evening gown at the Miss World competition in Sanya, China.

But the 2015 Miss World Canada found that the Chinese regime had declared her “persona non grata” after landing in Hong Kong to seek a landing visa that would allow her to compete in the pageant. Lin won Miss World Canada, but was blocked from participating in the Miss World competition in China because she spoke out against human rights abuses in China.

Guests at the dinner saw Lin in the dress she would have worn had she attended the beauty pageant.

“I met a lot of people in Hong Kong who told me many inspirational things,” said Lin. “I think what we are doing here is defending our own conviction and freedom, inch by inch in our backyard, and I truly see that.”

While in Hong Kong, Lin had held several press conferences and met with various human rights organizations and activists.

Hong Kong lawmakers, businessmen, celebrities, and citizens extended their well-wishes for future success at Epoch Times, videos of which were collated into montages on YouTube.

“May there be many more 15 years after this anniversary,” said Alan Leong, the leader of Hong Kong’s Civic Party. “Persevere in reporting the truth.”

Leong also praised Epoch Times for its reporting on international news and analyses, as well as the paper’s coverage of “sensitive news” in China, such as organ harvesting of prisoners of conscience.

Lee Cheuk-yan, the chairman of Hong Kong’s Labor Party, said: “Many times I read news in Epoch Times that are not reported in other Hong Kong media …  so we really appreciate your efforts.”

After extending well-wishes to Epoch Times, Alvin Chung, the president of Prudential Brokerage Ltd., said: “As a matter of fact, economics and politics cannot be separated, with politics oftentimes taking charge. For example, with the Chinese stock crisis, Epoch Times highlighted how political struggle within the Party caused problems in the efforts to rescue the markets.”

Chung added: “Viewing the stock market crisis from a political angle reveals its root cause.”