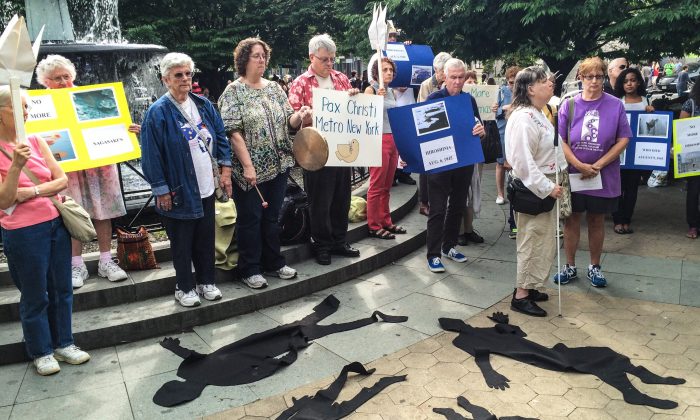 New Yorkers commemorate the 69th anniversary of the atomic bombing of Hiroshima and Nagasaki with prayer and the sounding of the gong for every year since, at Father Demo Square, N.Y., on August 3, 2014. (Jonathan Zhou/Epoch Times)
New York

In Greenwich Village, a Vigil for the Victims of Atomic Bombing

NEW YORK—Kathleen Sullivan was on a visit to Auschwitz with six atomic bomb survivors when the nuclear reactors in Fukushima failed.

An anti-nuclear activist and filmmaker, Sullivan had organized a trip for survivors from the Hiroshima and Nagasaki bombings—dubbed “hibakusha” in Japanese—to join Holocaust survivors in giving talks at schools in Poland.

“I told them ‘Fukushima happened, please don’t think you have to do anything today, you must want to contact your relatives,'” she told the survivors, a few of whom were from the Tohoku region where the tsunami had hit.

“They said ‘there’s nothing we can do, we’re here, let’s go ahead with what was planned,'” Sullivan recounted. “I was once again moved by the exceptional dedication and fortitude of the hibakusha.”

Sullivan and scores of members of the Pax Christi Metro Church held a vigil for the victims of the Hiroshima and Nagasaki bombings on Sunday. After a three-block march, they sounded a gong 69 times to commemorate the 69th anniversary of the bombings at Father Demo Square in Greenwich Village.

Before the vigil, the church held a screening of “The Ultimate Wish,” an anti-nuclear documentary that Sullivan had co-produced. The film centers on the life of hibakusha Sague Shimohira, who was 10 years old when she survived the atomic bombing of Nagasaki.

The film switched between poignant testimonials of the hibakusha and interviews with experts on nuclear proliferation. Completed in 2005, it had been updated to include segments on the Fukushima disaster.

“My mother had told me stories of what it was like for her family in Italy to be bombed,” said Roseanne Cleary at the screening. “The film brought back the mood of those childhood stories, of entire neighborhoods disappearing.”

Cleary had participated in the million-man anti-nuclear protest on June 12, 1982, in New York City, but has focused more on anti-death penalty activism in recent years. She said the film has renewed an interest in anti-nuclear activism.

“It’s an issue people have gotten very indifferent about; it’s not on the front-burner by any means for most people, yet it’s one of the most dangerous things we have,” said Rosemarie Pace, the director of the church.

Pax Christi Metro began the tradition of a vigil for Hiroshima and Nagasaki a few years ago, inviting different speakers each year to talk about the nuclear threat. On an international level, Pace said, the Pax Christi church has been a critic of nuclear weapons from its inception.

A branch of Pax Christi in the Netherlands published a 284-page report on financial institutions with investments in companies involved in nuclear weapon programs in 2013.

“Fukushima was one of the most [serious] wakeup calls, it was so earth shattering that everyone became aware of it,” said Pace. “Sometimes it takes something like that to give you the opportunity to proselytize people about the issue.”

Japan had shut down all of its nuclear reactors in the year following the meltdown of the three reactors at Fukushima, but for anti-nuclear activists the victory proved too brief. The Sendai Nuclear Power Plant is slated to reopen in the fall, pursuant to the Abe administration’s goal of reducing Japan’s fuel imports.

There has been little progress in denuclearization in the United States, which updated its Mutual Defense Agreement with Britain to collaborate in maintaining their atomic arsenals.

Despite these setbacks, Sullivan remains optimistic the anti-nuclear movement “is on a new crest of activism.” Moreover, the activist lifestyle itself has been a source of contentment for Sullivan.

“People who work for peace and social justice are interesting people, so you get interesting friends and live an interesting life,” she said. “Why not do something everybody thinks is impossible?”