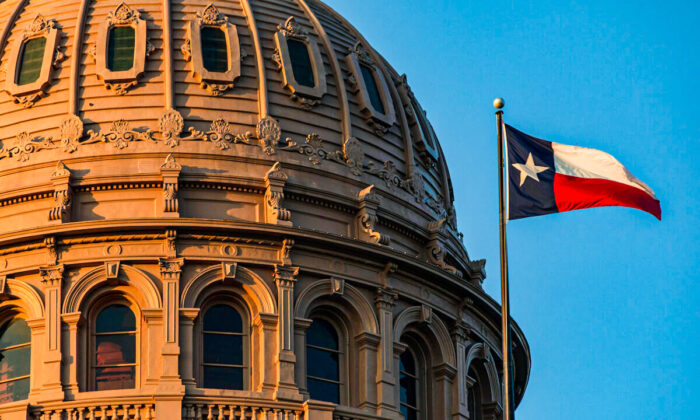 The Texas State Capitol is seen on the first day of the 87th Legislature's third special session in Austin, Texas, on Sept. 20, 2021. (Tamir Kalifa/Getty Images)
Texas

‘In God We Trust’ Signs Going Up in More Texas Schools

The motto “In God We Trust” is being displayed in a growing number of Texas schools, thanks to a law that recently went into effect requiring its display in a prominent location in public schools and institutions of higher education in the state.

Texas state Sen. Bryan Hughes, a Republican, co-authored Senate Bill 797, which was passed last year and requires schools to display the motto as long as the signs featuring it came from private donations and at no cost to taxpayers.

“The national motto, In God We Trust, asserts our collective trust in a sovereign God,” Hughes said in an Aug. 17 statement on Twitter following an appearance for a Northwest Austin Republican Women’s Club event.

Hughes shared a photo of one of the signs, saying he’s encouraged by people “coming forward to donate these framed prints to remind future generations of the national motto.”

The national motto, In God We Trust, asserts our collective trust in a sovereign God.

The law states that Texas public schools and institutions of higher learning must display the national motto in a “conspicuous place,” and an increasing number of signs featuring the words have been donated to school districts across Texas.

Patriot Mobile, a Texas-based cellphone company, donated several “In God We Trust” signs to Carroll Independent School District (ISD) campuses, saying in a statement on social media that they’re “proud to be a part of having our nation’s motto hung in our public schools.”

“Our mission is to passionately defend our God-given, Constitutional rights and freedoms, and to glorify God always,” the company said in the statement.

The company later clarified that it donated framed “In God We Trust” posters to “many other school districts in the Dallas-Fort Worth area” and that it “will continue to do so until all the schools in the area receive them.”

“We are honored to be part of bringing God back into our public schools!” the company stated.

During the presentation, the Board receives a signage donation pursuant to SB 797 by Patriot Mobile LLC. pic.twitter.com/Gju3NP0xpR

Similar signs have gone up in Austin and the Houston area, according to the Houston Chronicle.

But not everyone is pleased with the law that requires the display of the “In God We Trust” signage.

Anya Kushwaha, founder of the Southlake Anti-Racism Coalition, told NBC DFW in an interview that the law is problematic, as it blurs the line separating church and state.

“I feel like they don’t have a choice right now to put them up, but hopefully this will spark larger conversations about having more freedom of expression, so if they are allowed to put up signs like this there should be no reasons that other students or people can’t put up signs that have different messaging,” Kushwaha told the media outlet.

Despite some objections, the signs are increasingly popping up in Texas schools, with The Yellow Rose of Texas Republican Women stating in a recent post on social media that they’ve donated a number of the signs to Houston area school districts.

“In God We Trust” became the official motto of the United States in 1956, when President Dwight D. Eisenhower signed legislation that gave it the force of law.