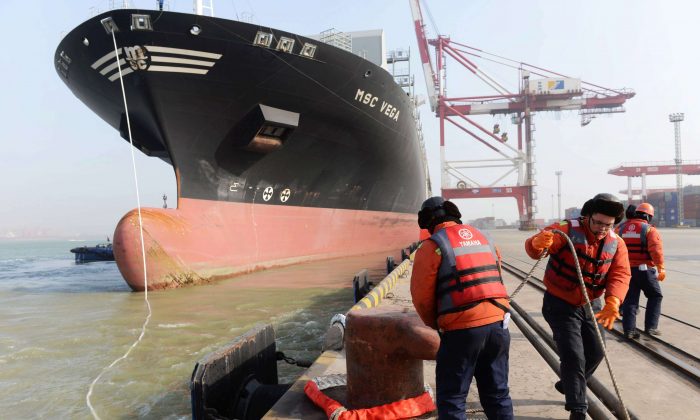 Workers prepare for a container ship to berth at the port of Qingdao, in northeast China's Liaoning province on January 20, 2014.
China

In Global Trade, China Plays by Its Own Rules

On Nov. 10, 2001, the Word Trade Organization (WTO) Ministerial Conference approved China’s accession to the WTO. In January, China overtook the United States as the world’s largest trader. What hasn’t changed is China’s way of bending the rules to bolster exports and restrain imports.

“China has agreed to undertake a series of important commitments to open and liberalize its regime in order to better integrate in the world economy and offer a more predictable environment for trade and foreign investment in accordance with WTO rules,” the 2001 WTO press release states.

However, China continues to play by its own rules.

One way it favors domestic producers is by restraining access to the Chinese market to foreign products. At the same time, it subsidizes its industry far beyond what is acceptable under WTO rules. Lastly, it enacts regulations that benefit its industry only.

Thea Mei Lee from the American Federation of Labor and Congress of Industrial Organization (AFL-CIO) stated to the Congressional Executive Commission on China in January that China was not ready to become a member of the WTO in 2001.

In 2014, for the first time ever, the United States challenged China for breaching “WTO procedural and substantive rules,” according to a January press release from the Office of the United States Trade Representative.

One allegation: China continues to impose duties on U.S. grain oriented flat-rolled electrical steel, resulting in a $247 million decrease in exports from the United States to China, falling from $250 million to $3 million a year.

Michael Froman, U.S. Trade Representative, said that if China refuses to comply with WTO rules the United States will continue to file dispute actions with the WTO.

“We will not stand by while China misuses trade remedies to block U.S. exports unfairly,” said Froman in the press release.

“The Chinese government’s subsidization of its steel industry has created a huge oversupply of steel products in the global market, which depresses steel prices in the United States and foreign markets,” testified David Horn, executive vice president and general counsel at AK Steel Corp., headquartered in Ohio.

Between 2000 and 2005, China’s steel output tripled. By 2009, China produced close to 50 percent of the world’s steel. By 2013, China produced more than seven times the steel produced in the United States.

According to Horn, Article 16 of China’s Iron and Steel Policy states that it would subsidize the steel industry directly. The support would be in the form of “taxation, interest subsidies, and scientific research funds.”

It is difficult to assess exactly how much the Chinese regime subsidizes its steel industry because of the lack of transparency. However, a study by Usha Haley and George Haley, published in a 2013 Harvard Business Review, found that since WTO accession, China has annually subsidized 20 percent of all its manufacturing capacity.

According to the Haleys, between 2000 and 2007, the Chinese regime provided $27 billion of energy subsidy to its steel industry. Because of the subsidy, “Chinese steel sells for 25 percent less than U.S. and European steel.”

Therefore, “because of massive Chinese subsidies to several industries, no free trade exists and markets have failed,” according to the Haleys.”

However, Horn testified that not only direct subsidies benefit the Chinese steel industry, but also the Chinese regime’s manipulation of its currency. Yet, the U.S. Department of the Treasury has refrained from naming any country, including China, as a currency manipulator.

Additionally, the U.S. Department of Commerce refuses to investigate if “currency undervaluation constitutes a countervailable subsidy,” as defined by the WTO.

The above remark by Horn is based on a 2013 International Monetary Fund report, which found the Chinese yuan to be undervalued by up to 10 percent.

While the U.S. government has kept a gentleman’s attitude, the Chinese regime took the offensive and in 2010 charged the United States with violating WTO rules, without going through WTO procedures.

For example, it imposed countervailing duties on certain products from AK Steel without producing evidence that the company in fact violated WTO procedures.

Although the United States took the case to the WTO, and a ruling was issued in favor of AK Steel, it took from 2010 until 2012 for the WTO to rule against China.

However, “more than one year has passed, yet the [Chinese regime’s] duties remain in place,” and Horn foresees a great number of additional proceedings before the issue can be settled.

Elizabeth Drake, partner in the law offices of Stewart and Stewart, testified before the Congressional Executive Commission on China, stating that the Chinese regime continues to undermine a rule-based trading system.

She further says the Chinese regime uses the WTO rules, regulations, and findings “not as a legitimate means of correcting unfair trade but as a tool of retaliation and intimidation.”

Although China joined the WTO, it has refused to sign on to the Organization for Economic Cooperation and Development (OECD) arrangements on export credits. However, WTO agreements require the WTO members to comply with the OECD arrangements.

To the U.S. exporters’ detriment, the United States is not challenging China concerning export credits but has agreed to behind-the-door negotiations. These negotiations may result in international guidelines, but are far less than required under OECD arrangements.

In effect, should such negotiations be successful, they “would be a significant step backward from the rules that have governed export financing for decades,” Drake testified.

Testimony before the Congressional Committee exposes a China that flouts the rules it has agreed to follow when becoming a member of WTO. The truth is that China plays by its own rules and couldn’t care less about the agreements it signed.