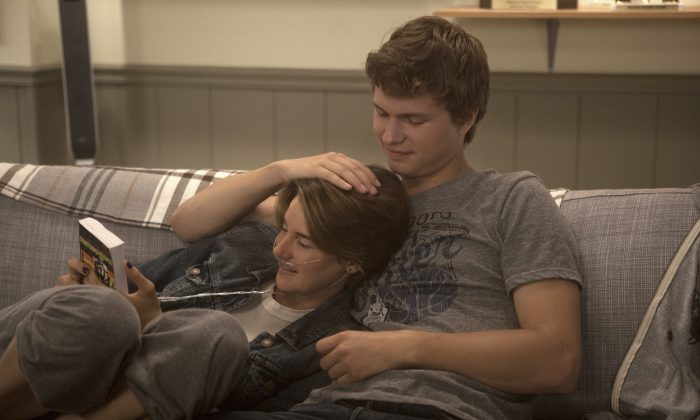 In Giddiness and Melancholy, Tears Are Inevitable

Boy meets girl. They fall in love. The end.

Should be that simple, right?

“Happily ever after” seems to be just another far-fetched idea in this summer’s most anticipated teen romance film, “The Fault in Our Stars.”

Based on young adult author John Green’s bestselling novel, the film follows the story of Hazel Grace Lancaster and Augustus Waters, two young cancer patients who fall head over heels for each other through their shared passions for music and good literature.

Fresh off her recent blockbuster “Divergent,” which shot her to fame, Shailene Woodley plays Hazel Grace, a teen who has been diagnosed with terminal cancer and is forced to lug around a heavy oxygen tank.

Hazel is reluctantly brought to a support group by her mother so she can relate to peers going through similar hardships. There, she comes across Augustus Waters or “Gus” (played by Ansel Elgort), an obnoxiously charming teenage boy who has lost a leg to cancer but joins the group out of support for his friend Isaac (Nat Wolff), who is losing his eyesight to cancer.

Thus sparks the beginning of a childish and borderline cheesy courtship, conducted through on-screen text message exchanges and a guessing game of “Is he going to call?” It’s what the middle of a Nicholas Sparks movie would be if it took place in the 21st century.

Hazel’s idolization of author Peter Van Houten (Willem Dafoe) takes the two on a trip to Amsterdam to ask Van Houten about his novel’s ambiguous ending. Knowing her limited time, Hazel and Gus are shocked to arrive only to come face-to-face with a drunk and unshaven Van Houten, unwilling to divulge the fates of his penned characters.

Hazel’s thoughts are revealed to us through first-person narrative. The screenplay, co-written by Scott Neustadter and Michael Weber, stayed faithful to Green’s novel, setting drastically different tones for the first and second halves. The mood starts out as lighthearted but spirals into a solemn feel, with the Amsterdam trip marking the midway point.

Woodley proves that she has more facets waiting to be tested. She effortlessly embodies the essence of Hazel Grace, a flirtatious but conscientious young woman who, despite her circumstances, tries to make sure her parents don’t have to suffer without her.

Meanwhile Elgort, who starred alongside Woodley as her brother in “Divergent,” is able to play a different chemistry as her soul mate. On-screen, the duo is convincing and bittersweet. While the film flirts with sappiness, it never forces unrealistic lines or scenes. The task of comic relief rests with supporting characters such as support group leader Patrick and Gus’s friend Isaac.

Even without reading the book, one can expect to shed tears watching “The Fault in Our Stars.” It is heartbreaking to watch the support group make peace with their limited time on earth, and how innocently Hazel and Gus wished they could do activities everyone else their age could do.

Laura Dern and Sam Trammell play Hazel’s parents and translate their fear and distress perfectly, even as they curb their protective instincts and allow her to go abroad.

The film retains a few of the details that made Green’s novel, including the unlit cigarette Gus always keeps between his teeth. In his words, “You put the killing thing right between your teeth, but you don’t give it the power to do its killing.”

“The Fault in Our Stars” is a well-composed film that traverses a minefield of delicate topics such as love, loss, and life. Trust John Green and his ability to tell a melancholic story of young love, tug on all your heartstrings, and still leave you to question the meaning of life.