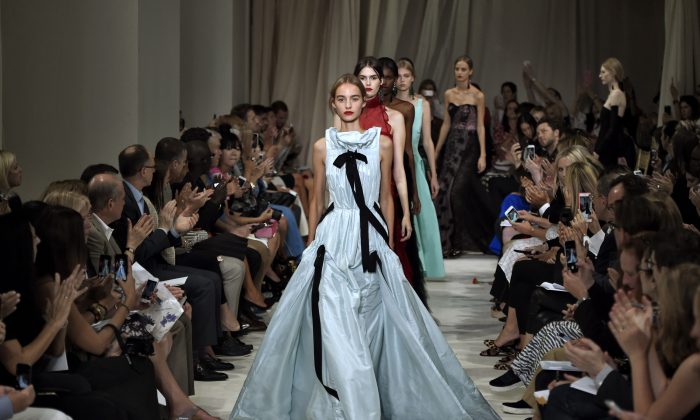 Spring 2016 Fashion Week ended with drama on Sept. 17 with Marc Jacobs presenting at the Ziegfeld Theatre on 54th Street.  This season was decidedly different as fashionistas said goodbye to Lincoln Center and hello to the new Skylight Studios locations in Midtown at Moynihan Station and Clarkson Studios in West SoHo. Everyone arrived chauffeured to the almost-80 shows in their Uber and Lyft car services.

While Alexander Wang celebrated his 10-year anniversary by going back to his streetwear roots, there was new blood at DKNY with Public School designers Dao-Yi Chow and Maxwell Osborne at the helm this year.

Other firsts included Riccardo Tisci presenting the Givenchy spring collection in New York for the first time instead of Paris with live performances on the Hudson River, under a dramatic sunset finale on Sept. 11, exposing the two beams of light from the World Trade Center tribute as backdrop. In a sign of fashion being democratized, Givenchy gave away 820 tickets to the show via the brand’s website.

The dust has now settled on NY Fashion Week as all the editors, fashionistas, and models have made their way to London for the next round of shows. We take this time to highlight the top 4 trends we will be wearing next spring.

The fall fringe trend sweeps into spring 2016 without being overly bohemian or ’70s focused. The fringe was spotted in flapper-style movement on evening gowns at Prabal Gurung, Givenchy, and Marc Jacobs. We witness the fringe in more casual expressions; swaying on military coats at Alexander Wang and flirting unexpectedly through pockets at Diane von Furstenberg. Still not ready to adopt the style going strong for three seasons? Try a fringe in accessories from earrings at Oscar de la Renta to bags at Tory Burch.

Spring is coming up roses … red that is!  It’s fitting that fashion week started off with rain showers given all the reds that were in full bloom. The runways of Oscar de la Renta, Michael Kors, Monique Lhuillier, Reem Acra, Anna Sui, and Naeem Khan showed red florals in the forms of intricate prints, embroidery, crochet, and lace.

Springtime leads us to remove the layers and begin to expose some skin.  This spring, it looks like we’ll be giving others the cold shoulder.  The exposed shoulder silhouette was seen everywhere in the updated form of cut outs on dresses and knits at shows including Prabal Gurung, Hervé Léger, Rebecca Minkoff, and Proenza Schouler.  So, put away the crop tops and grab some scissors. This begs the question, “How do you work out the collar bone?”

The short-lived pajama dressing trend is back but has extended to include other sleepwear, including the slip dresses made popular in the ’90s by Calvin Klein and Prada. So, who better than Francisco Costa to revive the slip dress once again at Calvin Klein—in light satin tones with wide straps, exaggerated breast stitching, and fringes falling from shoulders. Givenchy showcased a more traditional slip dress in sheer black silk and lace with exposed nude lining. Thakoon invigorated the pajama trend in a light blue culotte romper while Ralph Lauren sent a pajama jumpsuit in satin down the catwalk.

Pialy Aditya and Sonaly Aditya are twin entrepreneurs in the New York fashion startup scene. Reach them @pialyaditya and @sonalyaditya on Instagram and Twitter.