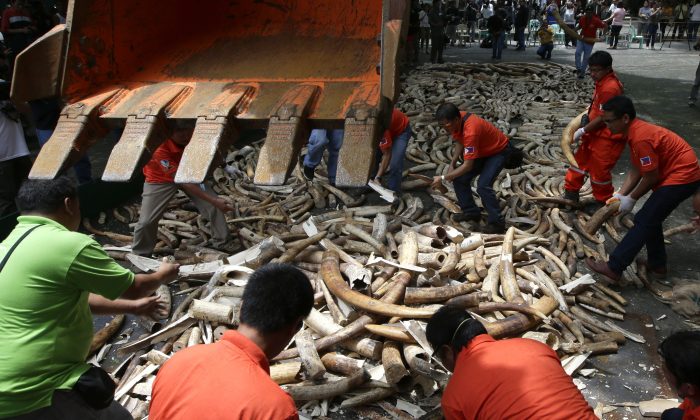 Workers prepare seized elephant tusks to be crushed by a backhoe during a destruction ceremony at the Protected Areas and Wildlife Bureau of the Department of Environment and Natural Resources in Quezon city, Philippines, Friday June 21, 2013. They used a backhoe and an incinerator Friday to crush and burn more than five tons of smuggled elephant tusks. (Bullit Marquez/AP)
International

In Fight Against Elephant Poaching, Philippines Crushes 5 Tons of Ivory

As Africa struggles to prevent its elephant population from being pushed to the brink of extinction, some 7,000 miles away, Philippine authorities destroyed approximately 5 tons of smuggled ivory worth $10 million—the largest amount of ivory destroyed outside of Africa so far.

The Philippines, along with Malaysia, Vietnam, and Hong Kong, is a major transit route and destination for ivory. While its demand for ivory is dwarfed in comparison to countries like China and Thailand, it ranks as one of the top nine countries propelling the illegal ivory trade.

Philippine authorities said that the destruction of the stockpile Friday, gathered from seizures since 2009, demonstrates its commitment to fighting the illegal ivory trade. It also eliminates any opportunity for corrupt officials to resell the ivory, as was the case in 2006 when the largest single shipment of 4.08 tons vanished from the inventory, according to an international network that tracks the illegal trade.

“Ivory is known to have disappeared from a number of government-held stockpiles worldwide, so it is vital that proper protocols are established,” said Dr. Colman O’Criodain from the World Wide Fund for Nature.

Steven Galster, director of Bangkok-based anti-wildlife-trafficking Freeland Foundation said, “This not only sends a message to wildlife traffickers that the Philippine government is taking firm action against the illegal ivory trade, but also takes a stand against corruption by burning their ivory stockpile so it cannot be stolen then sold into the black market.”

Major sources of illegal trade are Kenya, Tanzania, and South Africa according to the Convention on International Trade in Endangered Species of Wild Fauna and Flora (CITES). Ivory can fetch up to $2,000 per kilogram ($910 per pound) on the black market and more than $50,000 for an entire tusk.

International ivory trading has not always been illegal and it wasn’t until 1989, shortly after Kenya torched its first batch of elephant tusks, that CITES decided to outlaw the international ivory trade. At that time, elephant hunting was rampant, and in less than 10 years, Kenya’s elephant population plummeted from around 65,000 in 1979 to 17,000 in 1989.

While it’s not known exactly how many elephants were killed in 2012, the African Wildlife Foundation (AWF) estimates that “more than 25,000 elephants are killed illegally for their ivory every year.” The World Wildlife Fund estimates that there are about 470,000 to 690,000 African and 25,600 to 32,750 Asian elephants alive today.

If this rate of killing continues, even with the highest estimate of elephant populations, elephants would be wiped out in less than 30 years.

But when Kenya destroyed its first stockpile of elephant tusks in 1989, it was about more than just the threat to the region’s biodiversity that losing the elephant would mean. Kenya’s economy relies heavily on tourism, as do many other African nations. The country’s then-President Daniel arap Moi saw how devastating the loss of elephants could be for the local and national economies.

Country leaders, however, have another reason to be concerned.

“The illegal ivory trade is also fueling terrorist activities in various parts of the world, increasing insecurity, and undermining national economies,” writes AWF in a statement on the Philippines destruction of its ivory.

Along with the drug trade, ivory has also been used as a fundraiser for terrorist organizations that have both the technology and the undercover networks to carry out such illicit operations.

Leaders at the G-8 summit in Northern Ireland last week signaled their understanding in a released statement saying “We encourage the UNODC (with GCTF and ECOWAS supporting) to convene a high-level meeting to bring together the countries of the region, donors and those with relevant expertise to look at the particular challenges facing North and West Africa, including cooperation in tackling, by a variety of means, terrorist groups that move across borders. We will also take action to tackle the illegal trafficking of protected or endangered wildlife species.”

To stamp it out completely, world leaders would have to unite in this fight as smuggling networks can span many borders and can involve not only organized crime, but also normal citizens who are lured in by the promise of quick and easy money.

But possibly the greatest foe in this fight is corruption and the lack of resources to fight it.

Many conservation groups applauded the Philippines’ action because destroying the ivory ensures that corrupt government officials do not steal it for sale on the black market.

CITES observed in its 2007 report “Monitoring of Illegal Trade in Ivory and Other Elephant Specimens,” “While the CPI variable is in an acceptable mid-range position, the perception of corruption would actually be much lower if not for the negative influence of the Philippines. In fact, it is probably worth noting that the largest ivory seizure ever made in the Philippines, possibly as much as 3.7 tones of raw ivory in 2006, subsequently disappeared from the custody of Manila Customs under corrupt circumstances.”

Other countries implicated in the ivory trade also struggle with such corruption.

While the Philippines has taken a significant first step in this fight against illegal ivory, O’Criodain, a Wildlife Trade Policy Analyst for WWF warns, it still has a long way to go.

“Everyone should be clear that the pulverization of seized ivory in no way removes the Philippines’ obligation under CITES to submit ivory action plans, which in the interests of transparency should have their non-sensitive details made public.”

Under the Philippines Clean Air Act, the crushed ivory is being incinerated at a government crematorium in the course of about 10 days. Some tusks will be used for a memorial to elephants.