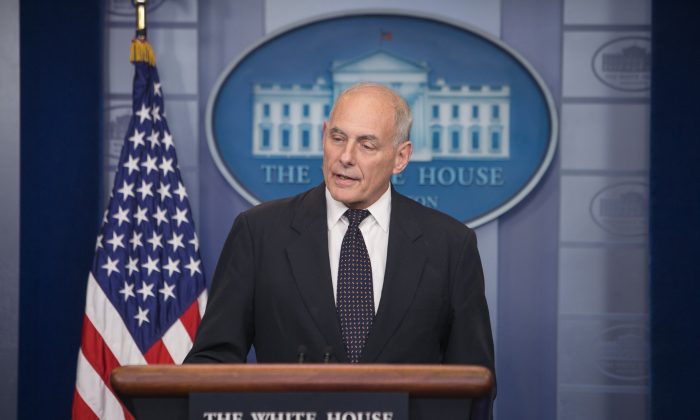 White House Chief of Staff John Kelly speaks to the press at the White House in Washington on Oct. 19, 2017. (Benjamin Chasteen/The Epoch Times)
US News

In Emotional Speech, Gen. Kelly Calls on Media to Respect ‘Last Thing That Is Sacred in Our Society’

WASHINGTON—White House Chief of Staff Gen. John Kelly silenced the press today with an emotional and somber account of what happens to an American soldier when they are killed in action.

Kelly described how the soldier’s remains are immediately covered in a shroud by their buddies—anything available that is appropriate. Then, the soldier’s body is transported to the base and packed in ice to be flown to Europe.

Once there, the body is packed again in ice and flown to Dover Air Force Base in Delaware. At Dover, the soldier is meticulously dressed in uniform, along with the medals that they’ve earned and the emblems of their service, and then put on another airplane linked up with a casualty officer escort, which takes them home.

All the while, wives, parents, brothers, and sisters are being told the news they never wanted to hear.

After Kelly’s speech, one reporter in the White House briefing room said he had never heard anything as poignant from a government official. Another said she got chills from Kelly’s words.

A retired four-star Marine general and father of a soldier killed in action, Kelly knows all sides of this issue.

“Hours after my son was killed, his friends were calling us from Afghanistan, telling us what a great guy he was,” Kelly said at the White House press briefing on Oct. 19. “Those are the only calls that really mattered.”

Kelly said he didn’t receive a phone call from then-President Barack Obama at the time, but he also didn’t expect it.

Kelly said his first recommendation to President Donald Trump was to not make calls to the families of fallen soldiers at all.

“When I took this job and talked to President Trump about how to do it, my first recommendation was he not do it because it’s not the phone call that parents, family members are looking forward to. It’s nice to do, in my opinion, in any event,” Kelly said.

“I think he very bravely does make those calls,” Kelly said about Trump. Kelly said Trump asked him for advice on how to lighten the burden of the families. He gave him the example of what a dear friend told him after his son was killed.

“That’s what the president tried to say to four families the other day,” he said.

Kelly said he was shocked by the politicization by Congresswoman Frederica Wilson (D-Fla.) of Trump’s call to Myesha Johnson, whose husband, Sgt. La David Johnson, was among four U.S. troops killed in Niger on Oct. 4.

“I was stunned when I came to work yesterday morning,” Kelly said.

He said he was so disturbed that he went to Arlington National Cemetery yesterday to seek some clarity.

He stood by the graves of the fallen—some of whom he had commanded when he was in service.

“They were doing what I told them to do when they were killed,” he said.

Kelly reminded the silent room to remember that service men and women sign up voluntarily to keep Americans safe.

Kelly encouraged the media to “write your stories,” but “let’s try to somehow keep that sacred.”

He said he believed that the sacredness of a soldier making the ultimate sacrifice for his country was “eroded a great deal yesterday by a selfish behavior of a member of Congress.”