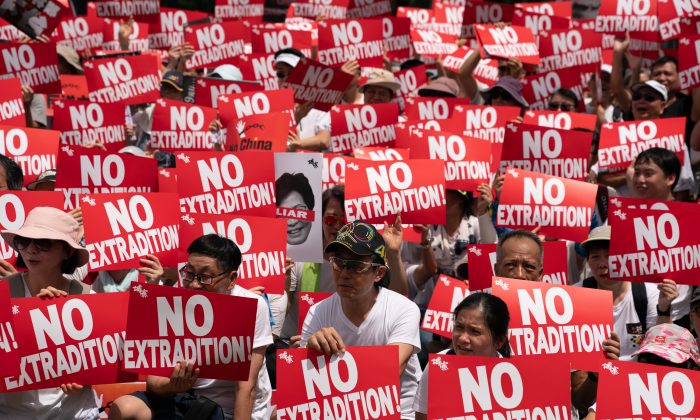 Protesters hold placards and shout slogans during a rally against the extradition law proposal in Hong Kong on June 9, 2019. (Anthony Kwan/Getty Images)
Thinking About China

In Defense of Ending Extradition Treaties With China

Recently, a minor row erupted on Twitter over some comments made about Spain’s shameless extradition of 94 Taiwanese citizens to China in June 2019. Those in favor came up with the usual questions: What are the options? Why should they not be sent back?

Their basic assumption—taking Beijing’s word for it—is that those who were extradited were regular criminals and that Spain shouldn’t act as a “safe haven” for criminals in refusing to send them back.

If this sounds familiar, it’s because it’s the most common tactic used by Beijing whenever a country raises some resistance to sending dissidents back to China.

But the recent warnings issued by Britain’s Foreign Office to Hong Kong dissidents exiled in the country and UK citizens critical of the Chinese Communist Party (CCP) show that resistance is necessary now more than ever. The warnings issued to these Hong Kong activists, British citizens such as Lord David Alton, William Browder, and British MPs have made it clear that it may now be dangerous to travel to a growing list of countries that maintain extradition treaties with either China or Hong Kong, including many European Union countries.

These infringements on the personal freedom of movement—in a clear attempt to limit freedom of expression under China’s growing extra-territorial reach—within Europe should be of grave concern to all, especially as two European Union countries (the Czech Republic and Portugal) still have an extradition treaty with Hong Kong, while 10 member states have maintained extradition treaties with China—despite repeated calls by the European Parliament to suspend them immediately.

The case of Spain’s repatriation of Taiwanese citizens to China illustrates this point. Wanted for online fraud and actively sought by Taiwan, it appears evident that these individuals should and could have been extradited—like Vietnam and the Philippines have done, or deported as South Korea did—to Taiwan. There are no legitimate reasons for “returning” them to communist China simply because the CCP asked to do so.

Even if ad-hoc extradition to Taiwan wasn’t possible—because not all jurisdictions allow them—authorities could still have used either local prosecution in Spain or remote prosecution, in which the target and requesting countries work together to prosecute the accused in the target country instead. This move wouldn’t have made Spain some sort of “safe haven” for criminals, although China would no doubt have made such accusations.

The legal system installed by the CCP is notoriously opaque, with no independent courts, no right to effective legal counsel, and rampant torture and forced confessions. Almost by definition, this means that any extradition to China is in open violation of the principle of non-refoulement under the U.N. Convention Against Torture (CAT), not to mention various commitments under other international laws.

The commitments by the Czech Republic, Spain, Portugal, and others to the rule of law and human rights don’t say that “only good people should be protected from torture,” or “only good people should have the right to a fair trial.” Just as you can’t defend freedom of speech by only allowing people you agree with to speak, we cannot ensure and defend the rule of law unless we do so consistently.

Bowing to the misrepresentations made by the CCP on how failure to extradite creates “safe havens” and “aids and abets” fugitives is an unacceptable departure from the international rule of law and the founding principles of the EU. Such intimidation shouldn’t be accommodated in fear of retaliation, but instead, it should be seen as an opportunity to reinforce those commitments. The budding fight against the Chinese regime’s extradition requests is an opportunity to strengthen rule of law and to pressure China to improve its legal system.

China, or rather the CCP, has chosen to have such a notoriously corrupt and politicized legal system, one that cannot be trusted. It isn’t our problem to fix; it’s one for the CCP to solve. Accusations of being a “safe haven” is simply an argument to pressure us to accommodate the Chinese regime, but in reality, extradition is and should be bound by clear rule of law commitments—and a reason for the CCP to change, not us.

The suspension of outstanding extradition agreements would send a clear signal to Beijing that such statements of concern aren’t mere words, but the expression of steadfast principles that can’t and won’t be violated. That the CCP, along with Hong Kong, is expanding its legal basis for prosecuting people outside of China for exercising freedom of speech, including of elected members of parliament, should make the need to suspend such agreements abundantly clear.

If Beijing were serious about fighting economic crimes, it would stop using such allegations for political gain and for settling political scores—this would enable its legal system to align with basic rule of law and human rights standards. But Beijing doesn’t want to, and it won’t.

The Western countries need to realize they are dealing with a problem caused by the CCP, and therefore a problem for the CCP to solve. No petulant screams of “safe haven” should undermine our commitment to the rule of law.