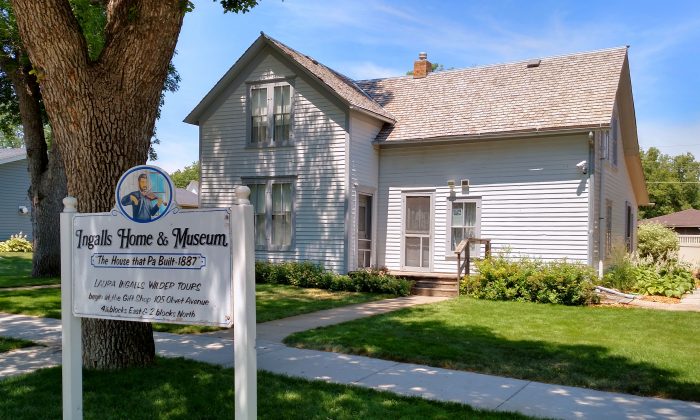 Permanent and final home of Charles and Caroline Ingalls, built between 1887 and 1889 by Charles Ingalls in De Smet, South Dakota. The house is known in Laura Ingalls Wilder's writings as "The House That Pa Built." (Unknown/Wikimedia Commons)
Viewpoints

In Defending the ‘Little House’ Books, We Defend Ourselves

A series of American classics has been de facto banned by a major professional organization over concerns the books are racist. This ban should be opposed: it mischaracterizes the books, threatens free speech, and likely leads to more, not less, intolerance.

The “Little House” books are a series of American children’s novels written by Laura Ingalls Wilder with the help of her daughter, based on her childhood and adolescence in the American Midwest between 1870 and 1894.

Eight of the nine novels in the series tell the adventures of the Ingalls family in pioneer America; the other one tells about Wilder’s husband’s experiences of growing up on a big farm in New York state. The books are basically autobiographical, but details and events were changed to make a better story and to keep Laura as the main character.

Later, a network television series, “Little House on the Prairie” (1974–1984), brought more fans to the book series. The books are considered classics and so far have withstood the test of time.

However, recently the Association for Library Service to Children (ALSC) chose to strip Wilder’s name from a major children’s literature award over concerns that the “Little House” books may be anti-Native American and anti-black.

This seems to violate the Council of the American Library Association’s written resolution on Feb. 3, 1999, which said, “We celebrate and preserve our democratic society by making available the widest possible range of viewpoints, opinions, and ideas, so that all individuals have the opportunity to become lifelong learners—informed, literate, educated, and culturally enriched.”

Blaming Wilder for writing about the conflicts of her time is entirely unfair. It is true that she depicts one of the survivors of the brutal U.S.–Dakota War of 1862 as expressing the sentiment that “the only good Indian is a dead Indian.”

But she contrasted this reaction with Pa’s attitude toward the Native Americans, whom he respects. He expresses sorrow that miscommunication led him to usurp their land. Also in the story, Laura challenges Ma when she asked, “Why did you come to Indian country if you don’t like the Indians?”

Pa participating in a minstrel show or Laura calling the performers “darky” might make the books anti-black if the characters lived today. But Wilder again is just writing about attitudes that really existed in that time and place—Wilder was born just two years after the conclusion of the Civil War in 1865.

And, as with her portrayal of attitudes toward Native Americans, Wilder contrasted a poor attitude toward blacks with admiration for a positive example, a black doctor, based on a real-life doctor she considered a hero. That doctor saved Laura, her family, and her neighbors from malaria in 1870.

The “Little House” books are the latest victims of a cultural war trying to extinguish any sign of racism. The fact is that virtually no book written in the past would be regarded as politically correct enough to pass muster today.

William O. Douglas, former associate justice of the U.S. Supreme Court, said: “Restriction of free thought and free speech is the most dangerous of all subversions. It is the one un-American act that could most easily defeat us.”

Readers might think that “The Little House” books were only challenged, not banned. But please don’t be fooled. The reality is that this a ban. The prestige of these books has been greatly diluted, and they now carry the stigma of portraying racist stereotypes.

Budgets are tight and institutions want to be “politically correct,” so there will be a quite a reduction in the number of schools and libraries that would purchase these “controversial” books. Parents may shun these books.

Although the ALSC may have changed the name of the award, their actions shouldn’t stop people from reading Wilder’s books or discussing them. This is a First Amendment issue and purchasing these books should be encouraged. I do not believe that erasing, rewriting, and revising history will lead to a more tolerant world. In fact, I fear the results may be quite the opposite.

There are excellent reasons to read the Little House books.

Linda Wiegenfeld is a retired teacher with 45 years’ experience teaching literature to children. She lives in Massachusetts.