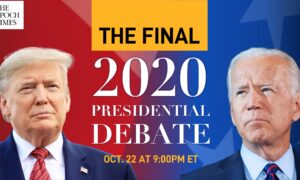 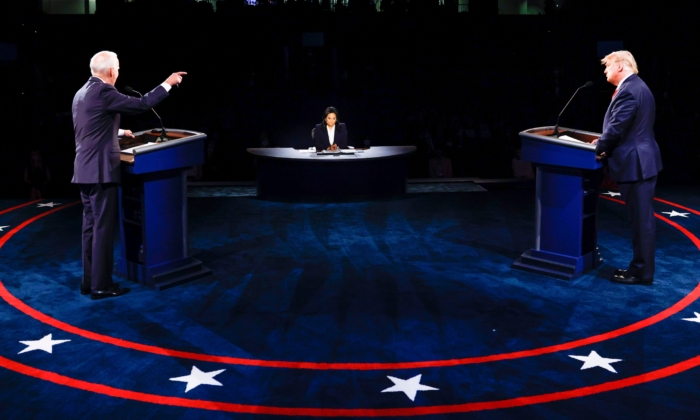 “His own national security advisor told him that what is happening with his buddy—well I shouldn’t—well I will—his buddy Rudy Giuliani. He’s being used as a Russia pawn. He’s being fed information that is Russian, that is not true,” Biden said.

The Democratic presidential nominee was apparently referring to the former New York mayor and personal attorney to Trump supplying The New York Post with a trove of files from a laptop purportedly abandoned by Hunter Biden at a computer repair shop. The Post’s reports about the files suggest that the younger Biden benefited from business dealings in China and Ukraine due to his father’s position at the White House.

“They were paying you a lot of money and they probably still are,” Trump continued. “But now, with what came out today, it’s even worse. All of the emails, the horrible emails of the kind of money you were raking in, you and your family. And Joe, you were vice president when some of this was happening, and it should have never happened. I think you owe an explanation to the American people.”

The president was likely referring to a new batch of emails sourced from former Hunter Biden associate Tony Bobulinski, who was Trump’s guest at the debate. Bobulinski spoke to the press before attending the event and said that he plans to hand over three of his phones to the FBI. Bobulinski also said that he personally spoke to Biden in May 2017 about the family’s plans for a business partnership with a Chinese energy conglomerate.

“I think you have to clean it up and talk to the American people. Maybe you can do it right now,” Trump said.

“I have not taken a penny from any foreign source ever in my life,” Biden said before quickly switching topics to the issue of Trump refusing to release his tax returns. “We learned that this president paid 50 times the tax in China, has a secret bank account with China, does business in China and in fact is talking about me taking money? I have not taken a single penny from any country whatsoever.”

The two candidates traded barbs about tax returns before Trump returned to the topic of the Biden family’s business deals with foreign countries. The president referenced an email published by the Post that details a proposed equity breakdown for a deal with a Chinese firm. Bobulinski said that the 20 percent stake assigned to an “H” in the email was meant for Hunter Biden and that the mention of the 10 percent stake “held by H for the big guy” referred to equity to be held by Hunter Biden for his father, Joe Biden.

“It said that ‘we have to give 10 percent to the big man.’ Joe, what’s that all about? It’s terrible,” Trump said.

The debate moderator picked up on the topic and posed a question to Biden about Hunter Biden’s position on the board of a Ukrainian energy company, Burisma, during his time as vice president.

“Nothing was unethical. Here’s what the deal,” Biden said. “With regard to Ukraine, we had this whole question about whether or not because he was on the board, I later learned, of Burisma, a company, that somehow I’d done something wrong. Yet every single, solitary person when he was going through his impeachment, testifying under oath—who worked for him—said I did my job impeccably. I carried out U.S. policy. Not one single, solitary thing was out of line. Not a single thing. Number one.

“Number two, the guy who got in trouble in Ukraine was this guy trying to bribe the Ukrainian government to say something negative about me, which they would not do and did not do because it never, ever, ever happened,” Biden added.

The former vice president was referring to a phone call between Trump and Ukrainian President Volodymyr Zelenski last year. During the call, Trump asked Zelensky to look into the firing of Ukraine’s top prosecutor, Viktor Shokin. Biden has bragged about forcing Shokin’s ouster by withholding $1 billion in U.S. loan guarantees from Ukraine. At the time of his firing, Shokin was investigating Burisma. Shokin has said in a sworn statement that his firing came due to pressure from Joe Biden due to the Burisma probe.

Trump then pointed to payments Hunter Biden received from Burisma despite having no energy experience.

“No basis for that,” Biden said. “Everybody investigated that. No one said anything he did was wrong in Ukraine.”