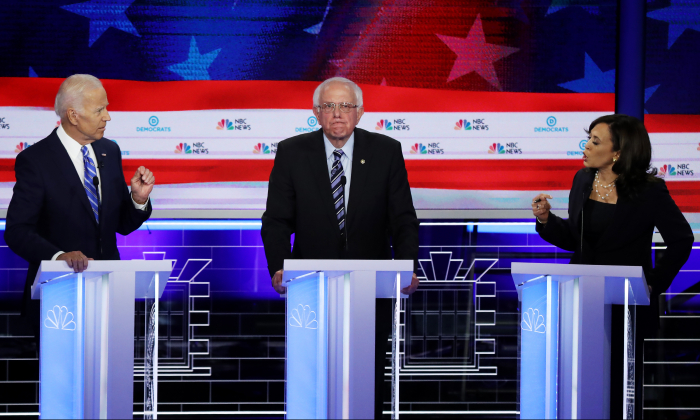 Three of the frontrunners in the Democratic presidential primary race made false or misleading statements about President Donald Trump’s tax cuts during the second night of the debates in Miami.

Democratic socialist Sen. Bernie Sanders (I-Vt.) claimed that 83 percent of the tax cuts’ benefits go to the “1 percent,” but omitted that the numbers are a hypothetical estimate of what would happen in 2027, when the tax cuts for individuals expire. Republicans passed a bill in the House last year to make the cuts permanent, but the Senate never took up the measure because more than a handful of Democratic votes are needed to clear the 60-vote threshold.

Sen. Kamala Harris (D-Calif.) falsely promised to repeal Trump’s tax cuts during her first day in office. Only Congress has the power to repeal the tax law.

Harris also misleadingly described the bill as one “that benefits the top 1 percent and the biggest corporations.” In reality, the tax cuts benefited 80 percent of Americans and only 5 percent saw their taxes go up, according to the nonpartisan Tax Policy Center. Repealing Trump’s tax cuts would increase taxes on four out of five Americans.

Trump often lauds the Tax Cuts and Jobs Act as one of the primary contributors to the booming economy and a welcome relief to the vast majority of Americans. But Democrats, aided by the media, have won the battle of public opinion by hammering a message that the tax cuts only benefit the extremely wealthy.

“A common argument that we see when it comes to the tax cut is that it primarily benefits the rich, but really that’s a function of the way our tax code is written. Even before the Trump tax cut, it was already a very progressive tax code,” Wilford said, referring to the progressive tax system, in which tax rates increase with income levels.

“But the Tax Cuts and Jobs Act actually made it even more progressive. Really, any tax cut is going to primarily benefit the wealthy, because they are the ones shouldering most of the tax burden,” he said.

Long before the first Democratic primary debate, Trump’s opponents took advantage of the complexity of the tax issue to mislead a huge swath of the public into thinking their taxes did not go down. While 80 percent of Americans received a tax cut, according to a poll by NBC/WSJ conducted in March, before the Internal Revenue Service (IRS) tax-filing deadline, only 17 percent believed their taxes would go down. Even among core Trump supporters, only 36 percent of respondents said they expected to pay less in taxes.

Wilford suggested that the media hasn’t done a good job in explaining to Americans how the tax cuts work. For example, media outlets went on a coverage blitz when early estimates from the IRS suggested that average tax refunds would be lower this year, but failed to correct the reporting when new data showed average return amounts catching up to the prior year’s numbers.

Meanwhile, little media reporting has been devoted to the fact that taxpayers would see the benefit of tax cuts in the form of larger paychecks, not larger refunds.

During the debate, Sanders, Harris, and Joe Biden appear to have seized on this misperception.

“I would be going about eliminating Donald Trump’s tax cuts for the wealthy,” Biden said.

Harris pointed to the projected $1 trillion tax revenue shortfall resulting from the cuts and suggested that “middle-class families will pay” to foot that bill “one way or another.” Harris didn’t add that the strong economy—fueled in part by lower taxes—has led to an increase in tax revenue. The omission is convenient because the boost in tax revenue proved Trump’s main argument against critics worried about a revenue shortfall.

Wilford said that the $1 trillion that Harris is concerned about is minuscule compared to the price tags on some of the policies 2020 Democratic candidates are proposing. Medicare for All, which Sanders has backed for years, would cost U.S. taxpayers $32 trillion over the course of a decade, according to one estimate. The Green New Deal, endorsed by every leading candidate but Biden, would cost an estimated $93 trillion in the first 10 years. Combined, the policies could triple the tax burden on Americans.

“Things like that, they dwarf a $1 trillion tax cut, so claiming that the tax cut has anywhere near the kind of price tag we’re looking at like the Green New Deal and Medicare for All is just inaccurate,” Wilford said.

The White House and the Trump campaign have done little to correct the record on tax cuts. The president has instead focused on celebrating the booming economy and the hottest jobs market in decades. He usually ticks off tax cuts and deregulation as the main contributors to the economic rebound.

In addition to reducing taxes on individuals, the Tax Cuts and Jobs Act significantly reduced corporate taxes, affecting businesses of all sizes across the nation.