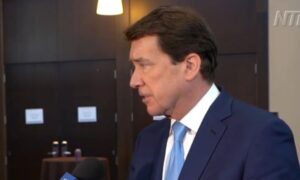 In CPAC Speech, Trump to Reaffirm He Does Not Want a Third Political Party

ORLANDO—President Donald Trump will reaffirm that he does not want a third political party during his first speech after leaving office, according to former Trump campaign manager Corey Lewandowski.

Lewandowski met with Trump for several hours on Thursday and went over the notes for the highly anticipated speech the president is scheduled to deliver at the annual Conservative Political Action Conference in Orlando on Sunday.

“He’s going to reaffirm that he does not want to have a third party, that he is going to be part of—and the head of—the Republican Party,” Lewandowski told The Epoch Times on Feb. 28.

Trump had previously disavowed the Patriot Party, which was started in the aftermath of the Congressional certification of Joe Biden as the winner of the 2020 election. Lewandowski noted that Trump will devote some time to criticizing Biden’s agenda.

“He’s going to talk about what he believes Biden is going to do to this country over the next four years. We’ve already seen a military strike in Syria in the first 30 days of this administration. We’ve seen getting away from an America First agenda, to embrace China, to allow once again, our companies to be subjected to the will of other countries,” Lewandowski said.

“If we learned anything in the pandemic, we learned that we must have production of the important assets here in this country and not be reliant on China and other places. That’s what Donald Trump did. That’s what Joe Biden is going to go back away from.”

Excitement about Trump has been palpable at CPAC over the course of four days leading up to Trump’s speech. There has been no criticism and lavish praise of the former president in the speeches and panels, which featured the who’s-who of the conservative movement, including former Secretary of State Mike Pompeo, Florida Gov. Ron DeSantis, and Sen. Ted Cruz (R-Texas).

In a series of media appearances, Trump’s advisors have previewed parts of the president’s speech.