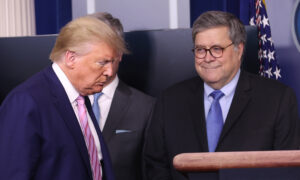 Barr: Probe of Trump Campaign 'One of the Greatest Travesties in American History'
0 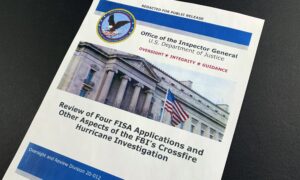 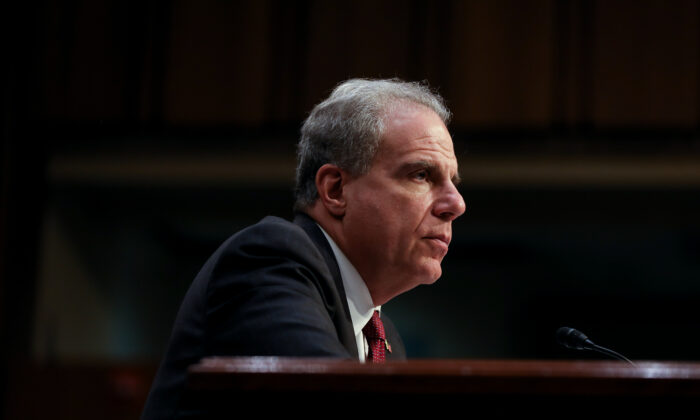 A Department of Justice review of 29 spy applications approved by a secret court uncovered only two material errors, in stark contrast to the 17 major errors discovered in applications to spy on former Trump campaign associate Carter Page.

The findings bolster the case that the FBI acted with bias against Trump’s campaign.

The FISC ordered the Department of Justice to review the applications.

That review found all 29 applications did, however, contain sufficient basis for probable cause, John Demers, assistant attorney general for national security, said in an Aug. 3 statement. Two material errors uncovered during the review didn’t invalidate the FISC authorizations. In contrast, the Justice Department conceded early this year that the material errors in the Page FISA applications invalidated two of the four warrants the bureau obtained.

The findings, along with the dozens of corrective actions undertaken by the FBI and the department’s national security division, “should instill confidence” in the FBI’s use of surveillance granted through FISC, Demers said.

A voicemail left for a Horowitz spokesman wasn’t returned by press time.

The portrayal triggered some pushback from lawmakers.

“So the FBI made 201 errors in 29 FISA warrants. But don’t worry everybody because they reviewed their own files (except the four THEY LOST) and they have assured the court that none of the errors were significant. Nothing to see here. Move along,” Rep. Kelly Armstrong (R-N.D.) wrote on Twitter.

In an 88-page explanation of the review, officials said 48 of the nonmaterial errors reflect typographical errors or misstated dates. Seventy-three others involved “non-material deviations between a source document and an application.” The source of an otherwise factual assertion was misidentified in 13 errors; the remaining four involved assertions that may be accurate, but the supporting document was missing.

Horowitz instituted the broader review after finding 17 significant errors or commissions in the applications to spy on Page. Many additional errors were uncovered in the Woods files for the applications.

The Page FISA applications cited the unverified dossier compiled by former British spy Christopher Steele, without mentioning the dossier was paid for by the campaign of Hilary Clinton, Trump’s opponent, and the Democratic National Committee.

The review punctured the belief among some of Steele’s veracity, noting that he relied on second- and third-hand reporting.

“There is such a range of conduct here that is inexplicable, and the answers we got were not satisfactory, that we’re left trying to understand how could all these errors have occurred over a nine month period or so, among three teams—hand-picked—the highest profile case in the FBI, going to the very top of the organization, involving a presidential campaign,” he said in an appearance before the Senate Judiciary Committee in late 2019.

Horowitz’s report “now makes clear that the FBI launched an intrusive investigation of a U.S. presidential campaign on the thinnest of suspicions that, in my view, were insufficient to justify the steps taken,” Attorney General William Barr said after the report was released.

In a rare statement, Rosemary Collyer, the presiding FISC judge at the time, suggested the behavior of the FBI agents was so egregious that it “calls into question whether information contained in other FBI applications is reliable.”

“The FBI’s handling of the Carter Page applications, as portrayed in the [Inspector General’s] report, was antithetical to the heightened duty of candor described above,” she said.