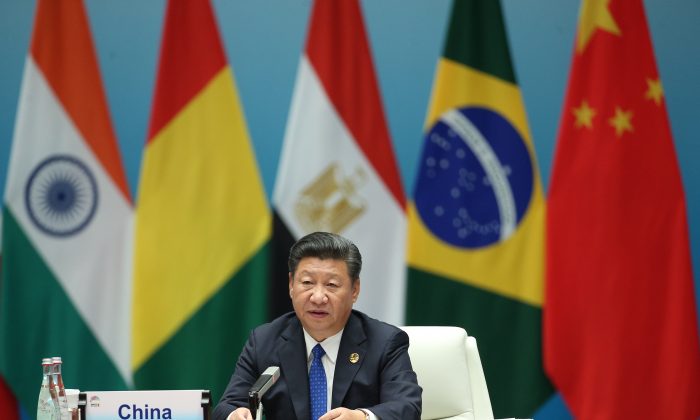 In Conflict Between US and North Korea, Which Side Is China on?

North Korea declared that it tested its sixth nuclear bomb on Sept. 3, a move emphatically condemned by UN Secretary General António Guterres and U.S. President Donald Trump, who threatened to stop trading with any country doing business with the reclusive communist country.

Of all the countries that have diplomatic ties with North Korea, Trump’s threat probably hits closest to home for the Chinese regime, North Korea’s largest and historically most loyal ally.

Over the years, China has supported its communist neighbor, fearing that a collapse of the Kim regime would send thousands of refugees pouring into the country.

The Chinese regime also uses North Korea as a bargaining chip with the United States, claiming that China is the only one that can bring North Korea to the table, says Chen Pokong, a China current affairs analyst.

But the Chinese regime also doesn’t want to deal with the backlash and instability in the region that North Korea has created.

For these reasons, Beijing has shown its disapproval of North Korea’s brinkmanship, but at the same time, has not done a great deal to stop it.

Chinese leader Xi Jinping and Russian President Vladimir Putin, who were at a summit in China during the most recent nuclear test, both ambiguously vowed to “appropriately deal” with” the North’s provocations, according to Chinese-state-run media.

When North Korea fired a missile over Japan on Aug. 29, Chinese Foreign Ministry spokesperson Hua Chunying called for restraint from all parties and for everyone to study the “relevant resolutions by the UN Security Council.”

This raises the question of whether China, in the event of an all-out conflict, would ultimately take the side of the United States or its maverick neighbor.

While the Chinese regime under Mao signed a pact with North Korea in 1961 that obliged China to come to North Korea’s aid in the event of an attack, Xi’s administration has begun to show signs of ending China’s long-standing support for the Kim regime.

Earlier in August, China approved UN sanctions against North Korea after Trump put significant pressure on Beijing to rein in its rogue neighbor.

Beijing also announced in mid-August that it would ban imports of products like coal, fish, and iron from North Korea starting Sept. 5—a significant move considering that about 90 percent of North Korea’s export income comes from trade with China.

China has also reportedly been fortifying its border with North Korea by sending more troops to the region, holding military drills, and gathering intelligence through 24-7 surveillance.

At the same time, China has declared that it “will never allow chaos and war on the peninsula,” according to China’s representative to the UN.

Further aggravating North Korea’s relationship with China is Pyongyang’s timing. Both the missile over Japan and the nuclear test come close to the Chinese regime’s 19th Party Congress, a once-in-five-year event at which China’s new leadership is chosen.

“The Chinese Communist Party needs to create a stable environment [ahead of the 19th Party Congress],” said Chen Pongkong. “That means the CCP is willing to compromise with others, even submit to humiliation. [North Korean leader] Kim Jong Un sees this, so he always picks this most crucial time to be provocative.”

When Trump and Xi met in person for the first time in April, North Korea was one of the topics of conversation. Coming out of that, Trump said he better understood the complexity of China’s situation and was optimistic that Xi would help the United States deal with North Korea.

“They have pressures that are tough pressures, and I understand. And you know, don’t forget, China, over the many years, has been at war with Korea—you know, wars with Korea. It’s not like, ‘Oh, gee, you just do whatever we say.’ They’ve had numerous wars with Korea,” he told White House reporters in July.

Recently however, Trump has hinted that negotiations, whether North Korea lays down its nuclear arsenal or not, are futile.

“North Korea is a rogue nation which has become a great threat and embarrassment to China, which is trying to help but with little success,” he tweeted Sept. 3. “South Korea is finding, as I have told them, that their talk of appeasement with North Korea will not work, they only understand one thing!”

Analysts believe that Kim Jong Un craves the respect that comes with being recognized as a nuclear power, and has no interest in abandoning its nuclear weapons.

“While geographically a small nation, if it is a big nuclear nation, the Kim empire—his dictator regime—will last forever. So Kim is pursuing the stability of his regime,” Chen Pongkong said.

“North Korea’s ultimate goal is to force the United States to accept it as a nuclear state, and to be able to talk to the United States on this basis,” said NTD TV’s East Asia political affairs analyst Wen Zhao.

However, it doesn’t look likely that the United States and other nuclear nations will willingly allow North Korea to be a nuclear power.

If Trump carries through on his threat to cut trade ties with North Korea’s backers, he could be looking at a trade war with one of the United States’ largest trading partners—China.

Trump has made no secret about the fact that he wants to re-negotiate trade deals with the world’s second largest economy, saying to reporters in July, “I’ve been going a little bit easier [on China] because I’d like to have their help … But we have to fix the trade with China because it’s very, very non-reciprocal.”

“In terms of North Korea, our strength is trade,” he added.

The United States is China’s largest importer. If Trump follows through with his threats, the Chinese regime could be forced to choose between the survival of its own economy and that of North Korea’s.

“Once the pressure is high enough, I believe the Xi government will choose the option with the least negative consequences,” said Chen Kuide, the chief editor of China in Perspective, a digital Chinese language magazine out of Princeton that covers China’s democracy movement and rights issues.