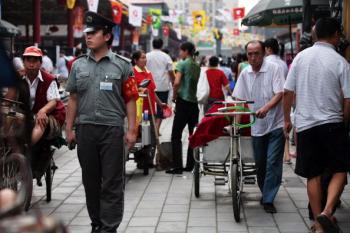 People have complained that there is a lack of festivity for the Games in Beijing. It seems most likely that those who are the happiest are the ones profiting from the games. ( Paula Bronstein/Getty Images)
Opinion

In China’s Democracy You Don’t Need to Vote

According to the Vice-president of the Beijing Organizing Committee for the Olympic Games (BOCOG), "China has its own version and way of exercising our democracy."

What he actually means by that remains a mystery to most of us. Probably he’s just referring to the one party, no free elections variant of democracy. Taking a closer look at the press conferences by BOCOG and the International Olympic Committee, where Wang Wei acts as a BOCOG spokesperson, might give a clue though.

Since the start of the Games the Beijing organizing committee and the IOC held daily press conferences to give journalists a forum to raise questions. During the first week the questions raised in the conferences got more intense, with Wang Wei accusing Western journalists of nit-picking. In turn, the journalists have made accusations of officials lying and refusing to answer questions.

When several journalists kept asking about the three ‘protest parks’ where demonstrations would be allowed, Wang Wei’s main reply was “I think you are in China and are supposed to cover the Games.” Ten days into the Games, the Chinese regime has yet to permit a single demonstration in any of the three official protest parks.

After being confronted on Friday by tough questions on issues such as Tibet, Falun Gong, ticket scalpers, and Chinese audiences hissing at Japanese competitors, the daily press conferences were suspended for two days. A text message on Saturday by the committee's media adviser to the journalists informed them the press conference had been cancelled, offered no explanation, and ended with ''Enjoy the Games!''

A lot of sensitive questions were basically answered with “we don’t have that information at the moment” and “we will get back to that later.” When a channel 4 reporter kept repeatedly asking the IOC if they are embarrassed that the Chinese government did not keep its promises on both press freedom and human rights, Wang Wei added to the IOC spokespersons, who were avoiding answers, that in China “everybody is happy.” Good to know, but it leaves one wondering if that would be really "happy" or "China's own version" of happy?