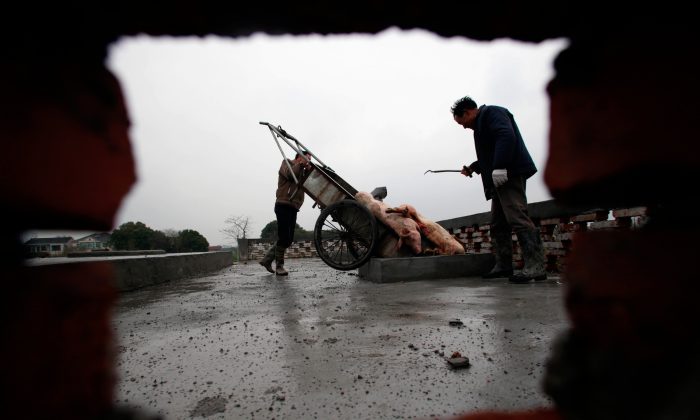 Chinese farmers dump pigs—dead from disease—into rivers by the thousands. But the rotting flesh doesn’t always stay there. Some have made a business of fishing out the contaminated meat, which then ends up on the market.

It is a trade defined by lax quality controls and bribery. On April 8, Chinese media outlet Sina reported that a slaughterhouse in Fujian Province was being repurposed for processing contaminated pork—the provincial high court found that a total of 2,000 tons had been sold for about $7 million.

Two other cases, also in Fujian, concerned those who got dead, discarded pigs from rivers. Two men, Lin Shen and Lai Jianhua, had sold about $2 million worth of substandard pork using this method.

A man surnamed Ling procures the animals directly from farmers for between $16 and $80.

Ling worked for Zhang Zhiqiang, who ran the Fujian slaughterhouse. They spent about a dollar per pound in their procurement.

“We simply buy everything,” Ling said.

Pig farmers, lacking sufficient means to dispose of their sick and deformed livestock, provide the materials for people like Ling and Zhang.

Looking for Used Clothes in China? Check out the Morgue

Wu Shengrong, a farmer from Fujian’s Xinhuo District, has over 2,000 pigs. With about 30 animals felled by sickness monthly, it is a hassle for him to dispose of them properly.

There is incentive to sell the dead pigs or discard of them in rivers. Some farmers told Sina that they had to pay about $30 to safely process a dead pig, while the local government subsidy is only $12 per animal.

Pervasive corruption in China means that industry regulations need not always be followed.

Every month, slaughterhouse inspector Zhang Shuihua received bribes from people like Lin and Lai. Zhang had such a close relationship with Lin that he even allowed him direct access to the inspection site.

“It’s an open secret that Zhang Zhiqiang [slaughterhouse owner] often bribes inspection officials,” a worker at the inspection site said. “We all turn a blind eye to it.”

A worker at Zhang Zhiqiang’s slaughterhouse said that neither he nor his colleagues would eat the meat processed there.

A frozen food distributor in Fuzhou, provincial capital of Fujian, said that his company spent $480,000 on meat from Zhang Zhiqiang, since his certificates were in order.

A noodle shop owner in the city of Zhanping, Fujian Province, said that he had purchased about $10,000 worth of meat from Zhang’s slaughterhouse since 2010.

“Some of the meat came with dark red or black dots,” the shop owner said.

Contaminated meat processed by Zhang Zhiqiang and Lin Shen was sold in a string of cities in multiple provinces across China, with sales reaching nearly $9 million.

The Fujian cases do not seem to be isolated incidents.

In Hebei province, a company was reported to have purchased live pigs with foot-and-mouth disease from local farmers. The on-site quality inspector failed to produce certificates showing the pigs had been properly examined. The animals were nevertheless sent to the slaughterhouse.

One farmer said that the official inspector at a local slaughterhouse judged pigs just by looking, without performing any other examination.

Food industry regulations in Shandong Province were called into question when authorities discovered an animal whose actual condition did not match what was recorded on its certificate.

“You can make your own official certificate” a driver involved in transporting pigs said.

Contaminated pork is just one dimension of the long-term corruption in China’s food industry.

The People’s Net, the online version of the state-run People’s Daily, reported in May 2013 the case of 65-year-old farmer Zhang Chunxin, who has grown vegetables for 40 years.

“Phorate and ‘divine fertilizer’ work the best,” Zhang said. “Buying and using these products is illegal, but the stores sell them anyway.”

The World Health Organization considers phorate as an “extremely hazardous” chemical. Small amounts can cause nausea and dizziness, while high exposure can lead to respiratory paralysis and death, according to environmental groups.

“Who wouldn’t use it?” Zhang said.

Most of Zhang’s vegetables are sold to wholesale markets and local supermarkets. He reported no inspection prior to sale.

One of the active ingredients in “divine fertilizer” is aldicarb, an insecticide banned in 2010. by the U.S. Environmental Protection Agency.

Zhang’s son was wary of his father’s produce.

“Seeing all those bottles of toxic chemicals my father buys, there’s no way I’m eating the things he grows.”