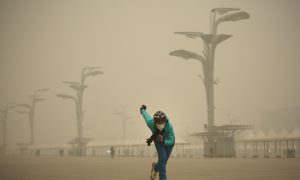 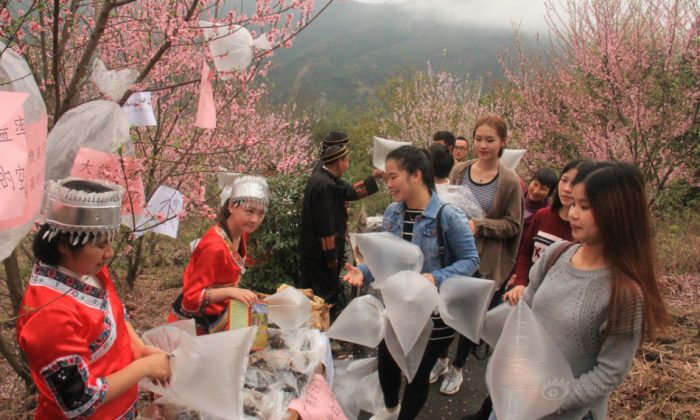 In China, Villagers Are Selling Air in Plastic Bags

Clean air has become a rare commodity in China, and villagers in China’s southern province of Guangdong are capitalizing on it.

With slogans such as “Buying Air Is Buying Health,” “Air Without Any Industrial Pollution,” “Air With the Highest Amount of Anions in Guangdong ,” and “Air from 1,400 Meters Above Sea Level,” villagers of Lianshan Zhuang and Yao Autonomous County are peddling clean air packaged in plastic bags to tourists visiting the local Jinzi Mountain, reported Chinese news portal Sina on March 20. A big bag of air goes for 30 yuan (about $4.60), and a small bag, 10 yuan.

While some tourists simply posed for pictures with the bags, and were content to simply enjoy the clean air freely available, others haggled with the vendors and brought some bags home.

Zhi Chenglin, a Jinzi Mountain local, was first to come up with the idea of selling air in plastic bags. Zhi told Sina that he got tired of inhaling smog after working for a delivery company in Guangzhou for three years, and decided to get a job back home. He hopes that his business will remind people living in the cities to cherish a clean environment.

Internet users on China’s popular microblogging site Sina Weibo expressed their amusement at both the vendors and consumers of the product. One netizen using the nickname “I Very GYD” from Chongqing wrote: “Even if it is really clean air, can someone who opens the bag on the spot tell me how it is any different from the air in the surroundings?

“It is more than just a business hype since there is an actual demand in society. Imagine, in a few years China could start importing a new product; what will be the volume of imported air and its trade value?” wondered “A Bottle of Nu’er Hong” from Shandong.

Guangdong is home to more than 60,000 factories, according to Places Journal, a San Francisco-based publication which focuses on urbanism and architecture. Citydwellers in Guangdong’s smoggy industrial areas thus enjoy driving up the many forested mountains in the province for some fresh air.

Pollution is a serious health issue in China. In 2013, an 8-year-old girl from Jiangsu Province was diagnosed with lung cancer, becoming one of the youngest sufferers of the disease; doctors attributed her illness to long-term inhalation of smog.