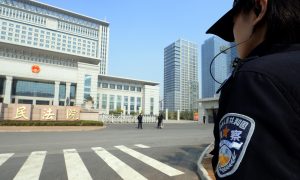 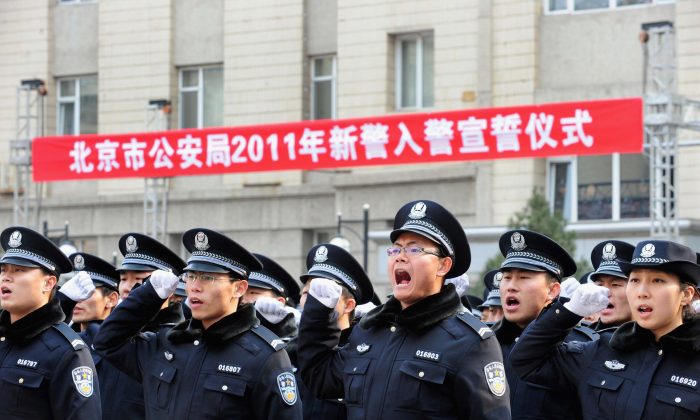 If you’re a Chinese lawyer who has accepted a client facing prosecution for his faith, expect obstacles at every turn.

For attorneys who choose to represent practitioners of the persecuted spiritual discipline Falun Gong, interruptions, harassment, court detention, and beating are among the methods used by court and police staff to undermine the legal process. Many Falun Gong trials are conducted in secret; attendance for relatives and friends of the accused is prohibited or limited.

200 Meters to the People’s Court

In a recent episode from Hebei Province in north China, four Falun Gong practitioners, detained illegally for over a year, stood trial on June 19. According to local witnesses, family members of the practitioners planning to attend the trial were greeted by a 200 meters wide (about 218-yard) perimeter outside the entrance to the People’s Court in the city of Sanhe.

At around 8 a.m., police and court bailiffs formed a cordon manned by hundreds of personnel backed up by dozens of vehicles around the court building. On site were officials from Communist Party and the 610 Office, an agency created in 1999 for the suppression of Falun Gong.

When the lawyers tried to enter the courtroom, the police delayed the start of the trial by leading them to different gates of the building and haranguing them over proper documentation. Only at 9:50 a.m. were the attorneys let in.

Visitors who tried to gain entry to the court were harassed and beaten. Only eight of the defendants’ relatives succeeded in witnessing the trial.

An elderly woman tried to check into the court to sit in on the trial, but was repeatedly questioned about how she had heard about the trial and how she had gotten an invitation. Then the onsite personnel removed her and others from the perimeter.

When a bespectacled man in his fifties attempted to gain entry, the police first misdirected him to a false entrance, then demanded his identification. The man in turn asked the officers for their identification and admonished them for their treatment of Falun Gong.

Four officers responded by beating the man and detaining him for a day.

The defendants had been abducted and held in detention by local Sanhe police since April 2014. That December, they were charged with “using superstitious sects to undermine the implementation of the law.” Such charges are typically levied using Article of 300 of Chinese criminal law, a commonly used statute created in 1999 to facilitate the suppression of Falun Gong, started that July by order of then-Communist Party head Jiang Zemin.

During the trial, dozens of plainclothes police sat in the visitor section with the few relatives allowed in.

When the court was adjourned for a recess, Guo Lichen (the 610 Office chief) and domestic security officers Shi Liandong and Gu Zhixue, entered the courtroom to discuss plans with court officials. Inside sources indicate that Guo even monitored the trial via CCTV.

“Who are you people? Why are you here?” one of the practitioner’s relatives sitting near the plainclothes police in the courtroom asked. “Don’t you know that because of you, family members of the [Falun Gong practitioners] are standing outside?”

The relative went on to criticize the persecution of Falun Gong, whereupon the plainclothes police left the court.

Sometimes violence is used to deny a legal defense to Falun Gong practitioners standing trial, as in the recent case of lawyer Wang Quanzhang, who was hospitalized with multiple injuries he sustained after being beaten by court bailiffs acting on orders of the presiding judge.

On June 18, Wang and two other lawyers represented seven practitioners at a trial held in the city of Liaocheng, Shandong Province, eastern China. The seven had been arrested for distributing fliers about Falun Gong, Radio Free Asia (RFA) reported, and were being charged with “undermining the implementation of law.”

Initially, Wang’s attempts at defense were repeatedly interrupted by the judge, who called multiple objections on account of Wang supposedly disrupting court order.

“No matter how calm we were, how well we obeyed the rules, the judge just kept interrupting us and calling out objections, as what we said was undesirable,” said one of the defense lawyers, surnamed Chen, in an interview with New York-based New Tang Dynasty Television.

According to Chen, the court was heavily guarded. As the defense made its case, plainclothes police viewing the trial would yell verbal abuses at them.

“The presiding judge had suppressed [Wang’s] speech from the beginning of the trial. He was interrupted four times. There wasn’t any problem with us lawyers. Instead, it was the court undermining the implementation of law,” Chen said.

Finally, the judge demanded that Wang and the others be expelled from the court. When Wang protested, he received a severe beating from several court bailiffs. The three lawyers were detained by the court for the rest of the day and had their belongings, including computers, stolen.

In March last year, authorities in Jiansanjiang of northern China’s Heilongjiang Province detained four prominent rights lawyers who traveled to the city to investigate claims that the Falun Gong practitioners were being held illegally in a “black jail,” or extrajudicial detention center.

They were detained for more than two weeks before being released. Two of the lawyers reported suffering extreme physical abuse while in detention and another described torture while in custody.

Prominent Chinese rights lawyer Gao Zhisheng, named one of the top 10 lawyers in China by the Ministry of Justice in 2001, was imprisoned several times after defending disenfranchised groups in China, including Falun Gong practitioners. Gao’s last disappearance was in 2009. At the start of 2012, Gao’s brother said he had received a court document saying Gao was being held in Shayar jail in Xinjiang, northwestern China.

Gao Zhisheng suffered extreme physical torture during detention, including electrical shock to his genitals. He was eventually released on Aug. 7, 2014. He is currently under house arrest and is undergoing physical and psychological recovery.