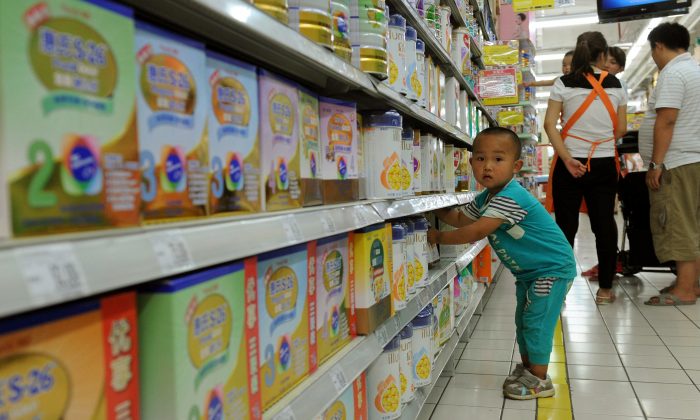 A baby plays around in the imported baby products section while his parents talk to a sales clerk in a supermarket in Beijing in 2013. (STR/AFP/Getty Images)
Social Issues

Chinese parents have to fork out more than in other countries to buy baby formula, then pay extra to keep their children at so-called cram schools, where teachers charge high fees, to give them a chance at excelling academically.

On Oct. 31, Globalization Monitor, a nonprofit organization based in Hong Kong, published a report on global milk formula consumption, revealing that Chinese consumers had to pay more for the same kind of branded baby milk formula compared to consumers in other countries. They also had to spend a greater portion of their salary on baby formula.

Consumer confidence in domestic brands of baby milk formula became essentially nonexistent a decade ago, after the melamine milk scandal. In 2008, a major Chinese brand of milk powder was found to be contaminated with melamine, an industrial byproduct. Six babies were reported to have died, and an estimated 300,000 became ill. Since then, the phenomenon of Chinese traveling abroad and emptying store shelves of formula has been noted in many places, including Hong Kong, Australia, and Japan.

The report states that while it costs about 1 to 3 percent of an average monthly salary to feed a 2- to 3-month-old baby in the UK, France, and Germany, the percentage sharply increases to 15 percent for Chinese who buy foreign brands, and even up to 40 percent for those who buy “super premium” formula.

“I started buying imported foreign baby milk formula 15 years ago. Back then, a 900-gram package of either Wyeth Promil or SMA cost like 148 yuan [about $22]. Domestic brands cost like 20 yuan [about $3],” said Ms. Tian, a mother living in Beijing, in an interview with The Epoch Times.

Tian said she felt early on that domestic brands were not trustworthy. “I would rather buy foreign brands of baby formula that have expired than any domestic brand,” she said.

Another woman, Wang from Shaanxi Province, told The Epoch Times: “If I have a child of my own in the future, and I am not doing so well financially, I still won’t buy domestic baby formula. I would raise a cow and feed [my child] fresh milk.”

On the same day the report was released, Wang Wenzhan, a former division director in China’s Ministry of Education, reported another glaring set of data about raising children in China: There are more than 220,000 cram schools in China, attended by about 137 million students—around 70 percent of all students, according to the state-run ChinaNews.com.

Tian said, “It is hard to raise children in China because the fee for cram schools is too high. It takes hundreds of thousands of yuan to raise a single child.”

Exorbitant cram school fees were reported by Chinese news portal Sina in 2012. Some cram schools charged 50,000 yuan (about $7,540) per school semester, and others charged twice as much.

These fees are unaffordable for many Chinese families. Estimating the annual salary in China is a notoriously difficult exercise, with accurate data hard to come by and salaries differing dramatically from province to province. According to the World Bank, China’s gross national income per capita was $8,260 in 2016.

“You look at those corrupt officials, they have so many illegitimate children. Normal citizens cannot even afford to raise two children,” said Wang.

In another article, Sina reported that at one middle school in Shaanxi Province, a teacher purposely did not explain thoroughly a new topic in class. When students asked the teacher for help, he refused to spend extra time teaching them, and instead told them to approach other students who had learned the material well.

As it turned out, those students had already been going to his after-school cram sessions.