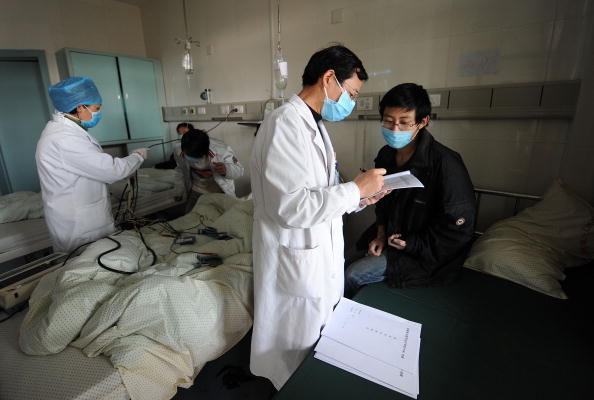 Individuals without proper medical credentials posing as doctors were recently found working at a medical examination center in China that is run by one of the country’s largest health care companies.

The fake doctors were revealed by an online article titled “Meinian Healthcare: If a Person Dies, You Can Only Make Money Off Him Once.” The report purportedly was written by a former outpatient department employee of a center run by Meinian Onehealth Healthcare, in the southern Chinese city of Guangzhou. Meinian operates over 200 health care and examination centers in 29 provinces and cities, according to the company’s website.

The July 30 article, which has since been widely circulated by Chinese media, described the case of a patient who went in mid-January to the center where the former employee worked. The patient checked out of the center after a series of medical exams indicated that he was in good health. However, the same patient later went to the Zhongshan School of Medicine for a checkup, where he was diagnosed with late-stage intestinal cancer. By then, cancerous cells had spread to the rest of his body. The former employee uncovered this information after reaching out to the patient, even obtaining a copy of the patient’s latest diagnosis report.

The former employee then dug into the backgrounds of Meinian staff and discovered that the so-called “doctors” who operated examination equipment, including CT scan, MRI scan, ultrasound, and gastroscopy, were not certified. For example, the “doctor” who ran the center’s ultrasound equipment was impersonating an actual doctor who left his position at the center in March 2017 by using the latter’s medical license, according to the former employee.

The center has since issued a statement, according to Chinese business news site China Fund, which is run by the Chinese Communist Party mouthpiece People’s Daily; It said that the online article was based on false accusations. The statement identified the former employee as Tan Chuilian, who left the center because of a labor contract dispute. The center also stated that it has since reported the so-called false accusations to the local police.

This is not the first time Meinian has been accused of hiring people without proper medical qualifications. In June, state-run Hunan People’s Broadcasting Station conducted an undercover investigation that revealed a Meinian examination center in Changsha City, Hunan Province, had five “doctors” on staff who did not have a license to practice medicine.

Meinian Healthcare’s stock prices have dropped sharply at the Shenzhen Stock Exchange since news of the fake doctors was reported. On July 27, the company’s stock was traded at around 21 yuan (about $3) per share.  Since then, the price has climbed back to about 19 yuan (about $2.78) after falling as low as 18.55 yuan (about $2.70).

On Sina Weibo, China’s equivalent of Twitter, many netizens expressed anger and frustration.  One netizen from Shanghai wrote: “A hospital is a place that involves matters of life and death. How could [Meinian] treat it so childishly? Have relevant Chinese authorities done their part in monitoring and overseeing things?”

Some Chinese netizens expressed disappointment that yet another case of alleged health-related fraud has been uncovered. One Guangzhou netizen wrote: “Fake milk powder, fake cooking oil, fake rice, fake medicine, fake doctors. Let me ask: is it easy for me to live [in China]?” The 2008 case of milk powder and baby formula tainted with toxic melamine was China’s first major food-safety scandal.

“Changsheng Bio-technology has brought out more problems [within China’s] medical sector,” wrote a netizen from Chengdu, the capital of southwestern China’s Sichuan Province.

The netizen is referring to a substandard vaccine scandal that has engulfed the country this month, involving Changsheng, a pharmaceutical company, and its subsidiary.

Changsheng Bio-technology was found to have shipped out more than 250,000 doses of a faulty DTap (a combination vaccine for diphtheria, pertussis, and tetanus), affecting more than 200,000 children.