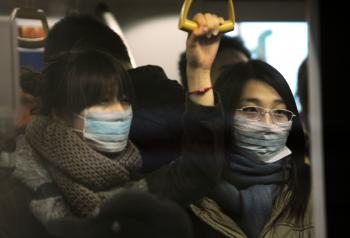 People wear masks while riding on the Beijing subway amid suspicions of a cover-up by the Chinese regime of the H1N1 situation, as happened with SARS. (Peter Parks/AFP/Getty Images)
China

In China, People Renounce Party Because of Swine Flu

Shi Yu
View profile
Follow
biggersmaller
Print
Chinese people, individually and in groups, are renouncing the ruling Communist Party over the Internet and attributing the cause to the spread of the H1N1 virus in China and criticizing the authorities’ alleged attempts to play down the pandemic’s impact.

The H1N1 virus started to spread across China earlier this year. Although the official number of deaths has been adjusted up recently, some Chinese are complaining that the real number of infections and deaths is much higher.

One Internet statement, signed by 27 people on Dec. 1, said that at least 100 students diagnosed with the H1N1 virus in their town (they did not specify which town) were not quarantined, and instead, were sent home. The statement said that the testing was performed after many students showed flu-like symptoms, but that “other schools in this county don’t even check what causes fever among students before sending them home.”

The statement also said that this and similar actions would allow the virus to spread among the rest of the population, and that the regime “does not value the lives of Chinese people but labels itself as the main force battling the pandemic.”

A group of 13 from Jilin Province posted a similar message on Dec. 6, comparing the Chinese Communist Party’s (CCP) handling of the H1N1 pandemic with the poisoned milk scandal of 2008.

Another message, posted by Xiao Jing from Shenzhen City, who had renounced the CCP on May 28, said: "Over the past years, I was deluded by the improvement of living standards and ignored the CCP’s nature and its history of killing. Judging from many incidents happening recently—in particular, the financial crisis and the outbreak of the pandemic—I am even more determined to renounce the CCP.”

Some who renounced the CCP identified themselves as suffering from the H1N1 infection. One person by the name of Wei Hong posted on Oct. 21 that he used to be a Communist Party member until he was infected with the virus, whereupon he renounced the Party.

He wrote: “The Chinese regime’s covering up the pandemic situation is equivalent to sending people to hell. I thus formally declare my withdrawal from the CCP.”

A group of 142 people also renounced the CCP on June 14, shortly after the outbreak of swine flu.
Their online statement said: “Now that the World Health Organization has announced a global outbreak of the pandemic, it is supposed to be something that is very dangerous. There will be a heavy death toll. The CCP will go under.”

The renunciations were registered at tuidang.dajiyuan.com, a sub-domain of the Chinese version of The Epoch Times web site. Called tuidang in Chinese, the movement is a grassroots effort to allow Chinese people to psychologically disassociate themselves from the CCP. The movement was sparked by The Epoch Times’ publication of the Nine Commentaries on the Communist Party in late 2004—a book-length editorial detailing the tyranny of the communist rule in China.

Though not officially acknowledged by the regime, there is now a register of over 64 million people who have renounced their association with the CCP-affiliated organizations.