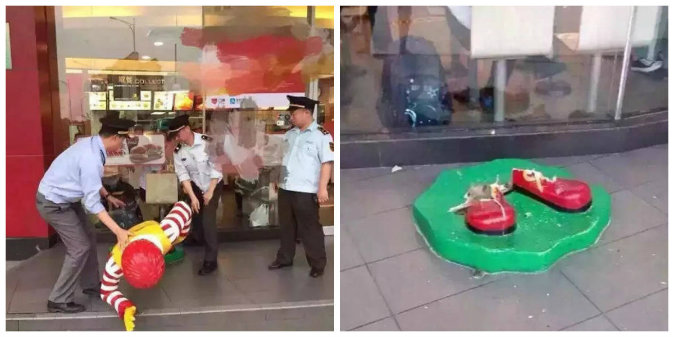 A Mr. McDonald statue is removed by Chinese urban police in China’s southern province of Guangzhou on April 10, 2016. (Sina)
China

In China, Not Even Ronald McDonald is Safe From the Police

In the afternoon on April 10, city law enforcement officials, or chengguan, took away a Ronald McDonald statue outside a McDonald’s restaurant in the Huadu District of Guangzhou, according to Yangcheng Evening News.

Ronald McDonald broke at the ankles after some forceful handling by the chengguan, who are known throughout China for their thuggish behavior. Left abandoned on the pavement was the statue’s oversized red shoes on a green pedestal.

The chengguan claim that they had targeted the Ronald McDonald statue because it was obstructing the walkway, and it was their duty to improve the city’s image. When asked by Yangcheng Evening News why the animal statues similarly located on a pavement outside a shopping compound across the street from the McDonald’s wasn’t also removed, the chengguan said “We enforce the law fairly and we do not target any specific company.”

Ronald isn’t in for a lengthy incarceration: “According to the related regulations, we only have the rights to temporary hold the item; we will return Ronald McDonald,” an official with the local subdistrict authorities told Yangcheng Evening News.

Some netizens on Sina Weibo, China’s popular microblog site, were highly amused at the incident. “LYX Good Person” from Guangdong wrote: “Ronald McDonald said: ‘It must be that old man from Kentucky who reported me to the police.'”

Others were not pleased to see another episode of the chengguan exercising their power arbitrarily. A netizen from Guangdong wrote: “How could it be blocking the sidewalk? Didn’t the store owner rent the place? Doesn’t the entrance to the rented place belong to him?”

“Chengguans are bullies who have committed so many scandalous acts. And if something goes wrong, they blame it on temporary chengguan officers,” wrote “Xiri Heliu” from Hunan. “Ronald McDonald was taken away under his own roof … I guess Ronald McDonald simply didn’t pay his chengguan protection fees.”

The brutality of chengguan is legendary: In a prominent case on July 2013, a dozen chengguan officers from Linwu County in Hunan Province brutally beat up fruitseller Deng Zhengjia with his own scales, and eventually killed him. The chengguan continued to kick Deng after he had collapsed on the roadside, and refused to call an ambulance.