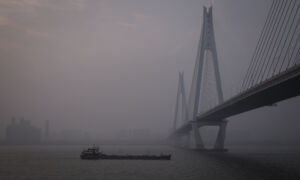 Police in Wuhan Search for a Man Who Killed 7, Including Local Official and His Family
0
Share Now
TelegramFacebookTweetEmailTellMeWeReddit
Copy Link 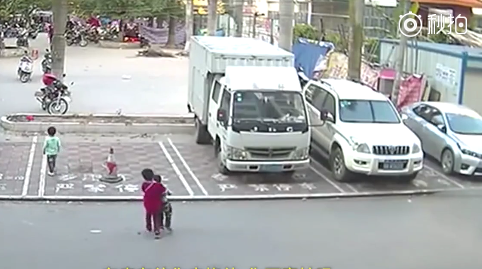 Chen Jiuyi helps an injured boy off the street after a hit and run in Guangxi Province on Dec. 2, 2017. (Screenshot via Miaopai)
Social Issues

In China, Netizens Applaud Seven-year-old Good Samaritan, Criticize Society in Which Such Kindness Is Rare

One youngster has become the talk of China’s social media for acting as a good Samaritan, which has become increasingly rare in China.

A video has been making the rounds on social media, showing security footage that recorded a traffic accident in Bobai County of southern China’s Guangxi Province on Dec. 2. A three-wheeled taxi hits a young boy dressed in a dark green shirt who was crossing the street. After the taxi flees the scene, the boy, apparently injured, struggles to stand up. The boy eventually lies face-down in the middle of the street.

Several nearby pedestrians look on and two motorcyclists drive by without stopping. Finally, a boy in a red shirt runs out from a nearby store. He picks up the injured boy and drags him to the nearby sidewalk.

Before putting down the injured boy, the boy in red can be seen talking to a boy in a light green shirt who was standing nearby, apparently asking him for assistance. However, the boy in light green is quickly yanked away by an adult accompanying him.

The good Samaritan is a seven-year-old, first-grade student named Chen Jiuyi. He later said in a local television interview that he decided to help the injured boy because his teacher had taught him that people should extend a helping hand to those in need. According to the Hong Kong newspaper Oriental Daily, the injured boy was later taken to a hospital and has a fractured right leg and a couple of loose teeth.

Later that night, the taxi driver, surnamed Liu, turned himself in to the police, according to Oriental Daily. He first tried to dodge responsibility by saying that he was suffering from some sort of sadness, which made him feel dizzy and prevented him from stopping to check on the boy he had hit. The police then demanded that Liu pay for all medical expenses for the injured boy.

It is unclear if Liu has been charged.

On Weibo, China’s popular microblogging website, many netizens have applauded the little boy for his heroic action, while directing anger and criticism at Liu and nearby pedestrians, as well as the adult who pulled her kid (the child in the light green shirt) away from the scene.

A netizen with the moniker “thelegends” from Guangzhou City in southern China wrote, “He is really brave and kind. I hope that his good human nature would not be wiped clean by the realities of society in the future.”

One netizen from Jinhua City in coastal Zhejiang Province decided to speak her mind about the society she lived in: “My conscience tells me that I should help out whenever there are people in need. But I cannot. Because if someone [I help] decides to extort [money] from me, nobody would be there to help me.”

Chen’s kindness resonated deeply with Chinese netizens, perhaps because so often good Samaritans have been victims of extortion, causing many to shy away from extending a helping hand. For example, in January 2016, an elderly man in Shaanxi Province accused a middle school student of “tripping” him after the student came to his aid when he fell.

In October 2015, Chinese e-commerce giant Alibaba began offering a “Helping the Elderly Policy,” a good Samaritan insurance policy covering litigation fees of up to 20,000 yuan ($3,100) for people who want to help others.

Some have attributed these incidents to the deteriorating morality in China. Others say the country has lacked a good Samaritan law to protect those doing good deeds. In fact, China finally passed such a law in October this year, according to the state-run newspaper China Daily. It stipulates that people who offer a helping hand in an emergency situation to those who are or believed to be injured, ill, in danger, or incapacitated will not be held liable should the victim incur harm.

The law apparently hasn’t yet made a big impact in China. Just a day after news of Chen’s act of kindness, three middle school students in Shangrao City in Jiangxi Province came to the aid of an elderly woman who fell on the street, according to an Oriental Daily report on Dec. 9. The woman then turned around and accused the three of “tripping” her walking stick, demanding that they pay her 100,000 yuan ($15,103) in compensation.

The woman finally gave up after police showed up and nearby security footage showed that she had fallen on her own.