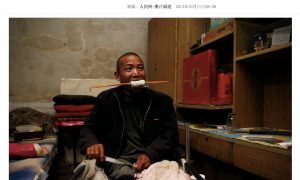 Chinese Man Hacks Off Leg Because Too Poor for Hospital
0 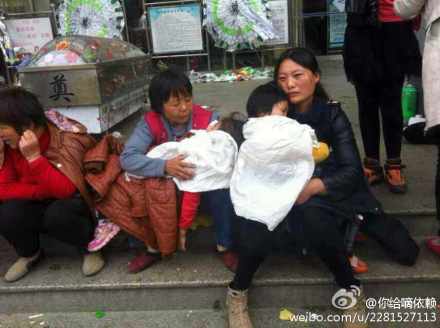 Relatives hold the deceased mother’s two other children as they wait in front of the hospital. (Weibo.com)
China

Pregnant 28-year-old Cao Xiangjuan was rushed to the hospital needing a C-section on Oct.5, but was refused immediate treatment because her husband did not have enough money to pay. Cao only received treatment three hours later when he managed to get the required amount.

During the operation at the First People’s Hospital of Peizhou, in eastern China’s Jiangsu Province, the hospital announced Cao was in critical condition and transferred her to the intensive care unit. Cao died sometime during or after the operation, along with her newborn baby.

The hospital attempted to silence the family with an offer of 20,000 yuan (US$3,272), but their offer was rejected.

On Oct. 7 and 8 the family brought Cao’s corpse to the hospital and displayed banners in protest.

Cao’s husband, Chen Peng, blames the hospital for making his wife’s condition more critical because they delayed the surgery. They also refused to allow him to see his wife.

Cao’s relatives say that during the protest they were beaten by hospital security staff and thugs, and anti-riot police threatened to take away the corpse.

More than 100 anti-riot police arrived at the scene, according to Chen. “I was not hit, but on both days my family were beaten and injured.”

There was no response from the hospital when contacted. The local police department denied beating the relatives of the deceased.

Chinese netizens suggested online that local officials have taken measures to censor the incident. It was said that a journalist from nearby Xuzhou City was beaten for attempting to take photos, and then police confiscated his camera and phone.

“We contacted the TV station in Xuzhou city and all the newspapers in Peizhou city,” Chen said. “But none of them came.”

Translated by Tan Hohua. Written in English by Christine Ford.