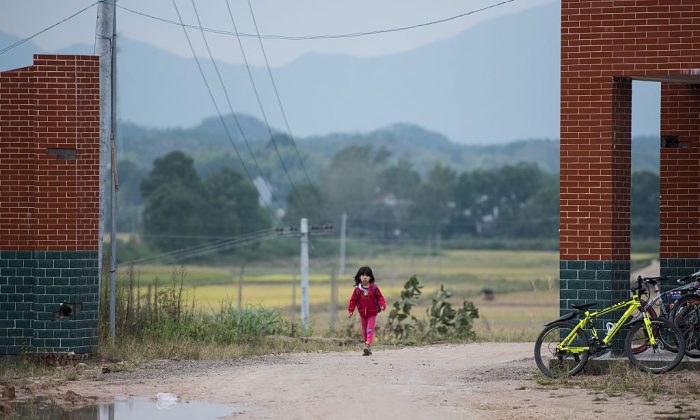 A schoolgirl walks along the street in Pingjiang County in China’s Hunan Province on Oct. 8, 2015. (Johannes Eisele/AFP/Getty Images)
China Society

A 54-year-old middle school teacher who had several times been recognized as a top teacher, and is the father of a daughter, was sentenced to life imprisonment for raping six school girls.

Gong Qiang (a pseudonym), a language teacher in Huai’an City in eastern China’s Jiangsu Province, had become an online con artist, setting up an elaborate scheme to trap young school girls into having sex with him and then to turn his victims into accomplices who assisted him in committing more sex crimes.

Gong’s scheme was discovered in September 2016. In three months, he raped six girls and sexually molested another. One girl successfully escaped, reported the state-run Chinese news website The Paper on Dec. 8. The girls were between the ages of 13 and 18.

Gong was arrested after another three of his targeted female students reported their conversations with Gong on QQ, a popular instant messaging service, to one of their school teachers.  After finding the conversations highly inappropriate, one of the school teachers called the police, leading to the arrest of Gong and a nearly 15-year-old girl nicknamed Xiao Juan. Police suspect that Xiao Juan was coerced into becoming Gong’s accomplice after she suffered sexual abuse from Gong.

Gong had been running an elaborate online scheme with two QQ accounts under two different identities. Under the first identity, he would play the role of a trustworthy person and chat with young women, gaining their trust so they would share their personal information with him. Once he got the information, Gong would “fabricate terrible stories” and make threats against the young women’s families, as a means of coercing them into sending him their nude pictures.

Gong would approach the women with his second identity—disguised as a friend of his first identity—who would blackmail the women by saying he would publicly reveal their nude pictures if they refused to have sexual intercourse with him.

He also forced Xiao to turn over QQ accounts of her friends, and had Xiao befriend other women, so they would be willing to share about themselves when Gong talked to them online.

China’s news media has been strangely reticent in reporting Gong’s case. His real name was not used, and, while his sentence was reported, when and by what court the sentence was given are a mystery.

In any case, the sentence shocked those who know Gong, as he had been recognized as a star teacher and has a daughter of his own.

Gong’s is perhaps more psychologically complex than other cases involving the rape of schoolgirls in China, but otherwise, it is not an isolated case. In May 2017 alone, there were four cases in China involving teachers sexually assaulting their students.

At the Beijing Film Academy, a state-run undergraduate and graduate film school, a student claimed via a post on Weibo, China’s popular microblogging website, that her good friend and schoolmate, nicknamed Ah Liao Sha, was sexually assaulted by the father of a school teacher, reported the Hong Kong newspaper Oriental Daily on May 11. In a Weibo post, the school denied the claim, explaining that Ah Liao Sha had a record of depression, so her allegation could not be trusted. The school also announced it would carry out its own investigation.

On May 16, a female student at a middle school in Tancheng County of Shandong Province killed herself by drinking poison after her teacher surnamed Ding assaulted her, according to Chinese news portal Sina. Ding has since been detained by the local security bureau pending an investigation.

In Suzhou City in China’s Anhui Province, one elementary school teacher surnamed Hui was sent to the local public security bureau for investigation after he was found to have sexually molested several female students, reported China’s nationalist state-run newspaper Global Times on May 16.

Xu Guozheng, a math teacher at an elementary school in Baofeng County, Henan Province, sexually assaulted 15 students, reported Sina on May 28. Xu has since been detained by the local security bureau.