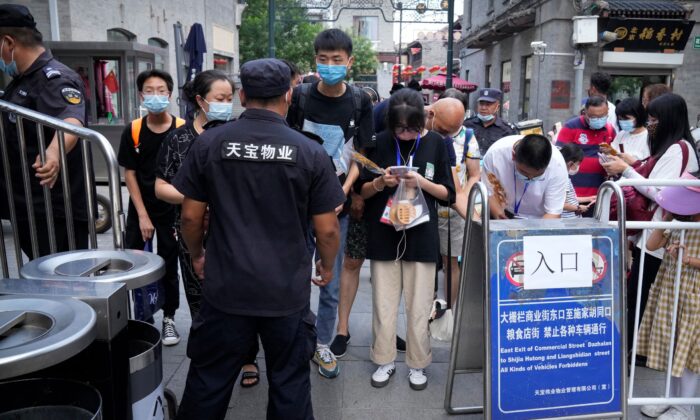 A security guard checks health codes on people’s smartphones at a tourist shopping area in Beijing, on Aug. 3, 2021. (Mark Schiefelbein/AP Photo)
INSIDE CHINA

In China, ‘Health Codes’ Developed During the Pandemic Are Now Used to Monitor the Public: Experts

Hangzhou, the capital city of Zhejiang Province, was the first Chinese city to introduce a “health code” system. Originally, the health codes were green, yellow, and red zones; but since the end of January, orange was added to indicate that the code holder resides in a pandemic prevention zone. In addition, use of the health code is being controlled ever more stringently and has become a tool for monitoring people and cracking down on or restricting the movements of dissidents.

On Feb. 11, 2020, when the health code was officially launched in Hangzhou, the number of applications on the first day exceeded 1.3 million, because only people with green codes could pass through the city. Those with a code of another color had to self-isolate or meet certain PCR test requirements and wait for their codes to be changed to green.

The health code is operated through the Alipay port on people’s mobile phones, so the phone controls whether one can travel or not.

According to Mana Data, a spokesperson for Alibaba’s Ant Group, which helped develop the technology in the early days, said: “We don’t have any data on health codes.” The spokesperson added that the standards and information are managed by the Chinese government.

Commenting on this development, Li Yuanhua, formerly an associate professor at the College of Educational Sciences at Capital Normal University, told The Epoch Times, “The health code policy is difficult to implement in Europe and the United States because these countries have strict legal requirements for privacy-sensitive data, while the most important thing for the totalitarian CCP [Chinese Communist Party] dictatorship is to monitor everyone.”

In the past, when population movement was restricted in China, the regime used “small foot detection teams,” meaning elderly women sitting at the entrances of villages and residential communities to watch people. They would spot anyone who was not a local. Now, the environment is different and so are the monitoring methods, Li said.

“The CCP uses big data and technology and uses the guise of providing services to the population to carry out authoritarian and totalitarian surveillance. During this pandemic, in particular through the health code, each person’s information is collected into the hands of the CCP. If the information is not used as they claim, but is instead used in a bad way, then the CCP’s public security apparatus can use it to monitor anyone.”

On the morning of Nov. 6, 2021, Xie was planning to fly to Shanghai to visit the mother of detained citizen journalist Zhang Zhan. But at the airport Xie’s health code was red, and he had to go back home. However, the next day, his health code was green again.

Xie posted before and after photos of his health code on Twitter: “It’s green again! What does that mean?!” He added that health codes shouldn’t be used as “a tool to restrict the movement of dissidents.”

Early on in the pandemic, there was already open opposition in China to the CCP’s use of so-called health codes to collect personal information and data.

In May 2020, Robin Li, CEO of Baidu, proposed setting up an exit mechanism for personal information collected during the pandemic that would protect the information. But there was no follow-up report.

Also in May, 2020, online celebrity “Hudu,” who boasts 5.3 billion views, published an article on Sohu, arguing that during the pandemic, “people were forced to hand over their full personal information, including their names, addresses, spouses’ names, telephone numbers, frequently visited locations, and travel routes—all in the name of public interest, making a huge contribution to controlling and effectively preventing the spread of the epidemic.” But the practice of normalizing the health code is suspected of violating citizens’ privacy.

A slew of “health code” derivatives have also sprung up in China, such as the “enterprise code,” “talent code,” “cold chain code,” “home harmony code,” “non-custodial code,” and others.

The so-called “non-custodial code” refers to the digital monitoring system for criminals who are not in custody, including those released on bail pending trial, those under residential surveillance, and those released on parole for medical treatment. Thus, an ordinary mobile phone can function as an electronic bracelet or electronic ankle ring for monitoring people.