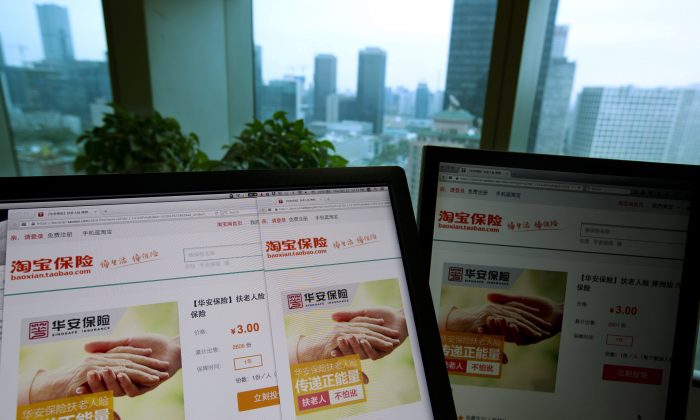 An e-commerce website by Alibaba and Hua'an insurance, also known as Sinosafe Insurance, selling an insurance product to protect good Samaritans from being scammed by elderly people they help is displayed on computer screens in Beijing, Thursday Oct. 22, 2015. (AP Photo/Ng Han Guan)
China

In China, ‘Good Samaritan’ Insurance Protects You From the Conniving Elderly

Helping the elderly in China has become so risky that insurance companies have created a niche policy for would-be do-gooders.

Called the Helping Elderly Policy, Chinese e-commerce giant Alibaba is the latest company to provide such an insurance plan. For three-yuan (50 cents) a year, the plan will cover up to 20,000 yuan ($3,100) in litigation fees for those who wish to help an elderly person who has fallen, or endured some other setback.

The need for such a policy, unusual as it sounds, seems to be acute. The insurance product has attracted over 60,000 buyers since started sales on Oct. 15.

That such a policy would even exist has widely been seen as emblematic of an overall collapse in basic social morality, according to experts and a survey of online sentiment in reaction to the news.

If you see some stranger lying on the ground, ask a friend to record him for you first. Better yet, ask a whole television crew if you can.
— Henan Internet user

But as has been demonstrated in China in recent years, many Good Samaritans who have attempted to help elderly people who have been in hit-and-run incidents, or fallen in the street of their own accord, have themselves been accused of causing the initial harm, and extorted for vast sums.

“Many people want to do good deeds by helping the elderly to their feet, but they are also worried about getting scammed,” said Xu Ting, product manager at Alibaba, to The Associated Press. “We hope the insurance plan can help reduce some financial costs by paying for litigation fees that can help restore the facts.”

‘No One Wants to Get Blackmailed’

A well-known incident in September, in the central Chinese city of Zhengzhou, illustrated the state of affairs. After an elderly man fell in the street, ending up with a bloodied face, passersby whipped out their smartphones rather than help him up.

“He was bleeding, so nobody dared to help him,” said an onlooker. “No one wants to get blackmailed.”

“The onlookers acted with good sense,” wrote a netizen from Henan Province. “If you see some stranger lying on the ground, ask a friend to record him for you first. Better yet, ask a whole television crew if you can.”

In a 2013 survey, 84.9 percent of respondents said they were “morally anguished” over the issue of helping elderly people in need.

Such sentiment is driven by reports like the following: In 2007, in the eastern city of Nanjing, an old woman was taken the the hospital by a young man, after her fall at a bus stop. After she was diagnosed with bone fractures, she demanded that he pay the hospital bill.

While the man denied wrongdoing, the court ruled that he should pay 40 percent of the medical costs. The verdict was widely condemned.

The elderly are not to be entirely blamed for seeking help to pay their medical costs, though. Hospital fees are high in China, and many medical insurance policies, in particular those within the reach of those with limited means, do not cover traffic accidents.

Communist Party-run media has regularly highlighted the phenomenon. According to the official mouthpiece People’s Daily, a Chinese college professor examined 149 disputes involving people helping others in the street between 2004 and this year, and concluded that the helpers were framed in 84 cases. They were at fault in 32, and the facts in the remaining cases were unclear, he said.

In a December 2013 survey of 140,000 people by the state-run Beijing Youth Daily, 84.9 percent said they were “morally anguished” over the issue of helping elderly people in need. Only 5.4 percent would extend help, while over half would prefer to walk away.

People’s Daily said in an Oct. 20 editorial that the new insurance policy by Alibaba and Hua’an Insurance could resolve the moral dilemma. It also complained that the insurance policy seemed to be a technical, rather than moral solution, to the problem.

“You can taste frustration and bitterness in this seemingly quite civic-minded and public-minded approach,” it editorialized, according to the AP.

Chinese citizens have mixed reactions to the new insurance policy.

“Before, for fear of trouble, I did not proactively help out elders who fell,” Xiao Luo, a white-collar worker in Beijing who purchased the Alibaba plan, told state news agency Xinhua. “Now, if I encounter a situation where I need to decide whether to help a person up, I might change my mind.”

A Ms. Gu from Beijing expressed ambivalence in an interview with official media. “I cannot possibly think to myself whether I have purchased an insurance before deciding whether I should do a good deed, should I?” she said.

The unfiltered commentary on the Internet was much more caustic. “Such insurance can be considered one of the unique features of China,” read one comment on Sina Weibo, a popular microblogging site.

Another wrote, with a tone of deep sarcasm: “So sad! Do other countries have such insurance?! It is good we have such unique socialism!”

Alibaba is not the first company to roll out such an insurance policy.

Yong An Insurance offered a 2 yuan subscription with a 10,000 yuan coverage plan in April 2014, titled “Untroubled Lei Feng.” Lei Feng is a semi-mythical communist cadre that has been upheld and extolled by the Party as the epitome of selflessness. Starr Companies, an insurance company based in New York, also has a similar product, “Good People Insurance.”

Several Communist Party mass organizations and industry associations—including the Communist Youth League in Guangdong, the Guangdong Federation of Youth, and Guangdong Association Of Insurance Industry—have purchased a million “Lei Feng” policies for their volunteers and social workers, according to a July 5, 2014, report by Xinhua.

Those policies may have since been discontinued, however, since they are no longer listed on the company websites.

People attempting to insure themselves against actually hitting an elderly person with their vehicle will find they’re out of luck, however. All the insurance policies only cover litigation costs. If found guilty—even 40 percent guilty—the helper will need to pay the compensation from his or her own pocket.