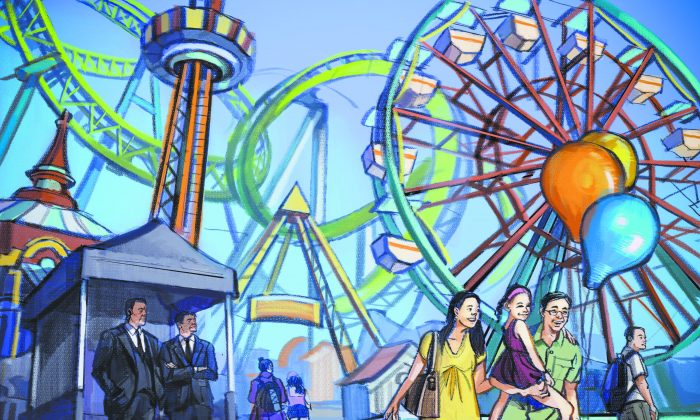 The Chinese Communist Party (CCP) permeates every aspect of society, and has started doing even more to make its presence known in daily life, from the workplace to famous tourist attractions.

All companies operating in China are required by law to establish party branches, and these are not mere rubber-stamp organizations. According to the CCP, party branches can take part in company decision-making to ensure that the company’s activities are in line with the Party’s policies. The branch is also in charge of any labor union. And the financial burden of running the party branch falls entirely on the host company.

In August, Reuters reported that a European company working on a Chinese joint venture was pressured to hire more party members and talk about its investment decisions with its party branch. In another instance, a U.S. firm moved its facility to a location suggested by its party branch—because the local authorities were promoting investment in that area.

At the Shanghai Disney Resort—which is 70 percent owned by Walt Disney Parks and Resorts and 30 percent owned by Shanghai Shendi Group—the 300 or so employees who are members of the CCP regularly hold political seminars discussing party doctrine during business hours, The Wall Street Journal reported.

Currently, about 70 percent of foreign-funded companies, or 106,000, have established party branches, said Qi Yu, deputy head of the CCP’s Organization Department, at a news conference held on Oct. 19 at the 19th National Congress.

All companies operating in China are required by law to establish party branches, and these are not mere rubber-stamp organizations.

That number shows a sharp increase from 2011 data provided by the Organization Department, which stated that about 47,000 companies receiving foreign investment had complied with rules to set up a party apparatus.

The number of Chinese-owned private companies in China with party branches also saw a spike, topping 2.72 million, or 67.9 percent of all Chinese-owned companies, according to Qi.

Party control within companies is nothing new. According to the Chinese news website China Business, which is run by the CCP-affiliated think tank Chinese Academy of Social Sciences, party branches in foreign-invested companies have a history dating back to the 1980s, when China first opened itself up to foreign investment. U.S. agrochemical giant DuPont was the first foreign company to set up a party branch in the Pudong New Area when it opened an office there in 1990.

Now, foreign-invested and private Chinese companies, under the influence of their respective party branches, could be swayed to invest more in China’s financially strapped state-owned enterprises (SOEs), which the CCP is struggling to keep afloat. This year, in an attempt to sustain SOEs, the CCP allowed the sale of minority stakes in the companies to private investors.

The Wall Street Journal reported in October that internet regulators in China planned to take 1 percent stakes in the country’s biggest internet companies—Tencent, Weibo, and Youku Tudou, a video-sharing site owned by e-commerce giant Alibaba—in order to be directly involved with the companies’ decision-making, a further sign of the Party’s desire to exert control over private companies.

“This explains the CCP’s mentality, which is that it doesn’t trust anyone or anything. It must have its own people to monitor from within. So there are party organizations everywhere, including religious organizations such as temples and Buddhist nunneries,” said Xia Yeliang, former associate professor of economics at Peking University, in an interview with New Tang Dynasty Television (NTD).

State official Qi Yu elaborated on the benefits of requiring a party apparatus in every company, stating that it can help the Party better understand China’s economic policies, resolve labor disputes, and provide “positive energy.” Qi’s remarks, however, drew much doubt and criticism from scholars.

“On the surface, it might appear that [companies] are voluntarily setting up party branches. However, there is, in fact, an underlying threat. If these private companies do not listen, they will have a difficult time [doing business] onward,” said Xia.

Xia added that with party branches influencing how companies conduct business, private companies in China are losing their ability to innovate, and ultimately, their competitive edge.

“[The CCP] is trying to create a so-called free economy inside a birdcage. Sometimes, [the company’s party branch] will play the traditional role of the CCP labor union; other times, it will more or less play the role of coordinating with employers,” said Hu Ping, the chief editor of Beijing Spring, a pro-democracy publication run from New York, in an interview with NTD.

But Hu said the true purpose of their existence is for monitoring and surveillance.

The Summer Palace in Beijing is a major attraction. Once an imperial garden during the Qing Dynasty, the compound boasts lakes, gardens, and palaces surrounded by picturesque hills. It was designated as a UNESCO World Heritage site in 1998.

On Oct. 30, the historic site announced that it would establish a “party representative office” that can provide services and promote the Party’s spirit to people, reported Chinese news portal Sina.

The initiative is part of the China National Tourism Administration’s recent effort to promote “red tourism.” At a recent meeting, the administration’s director, Li Jinzao, told staff about the importance of spreading party ideology, alongside other more mundane initiatives such as improving toilets, increasing safety, and encouraging tourism to the countryside.

A tour guide at the palace expressed enthusiasm for spreading party propaganda at her workplace, in an interview with the state-run newspaper Legal Evening News. “Through the representative office, I will do a good job in promoting our Party’s policies and spirit, and tell them the Party’s situation,” said Han Xiao.

For years, the CCP has extended its ideological influence beyond its borders, while trying to limit Western influence within the country. For example, the Party has established Confucius Institutes at academic institutions around the world to disseminate its ideology to students. At the same time, the CCP is wary of any potential introduction of Western values like freedom of thought and speech. In 2015, the Party considered enforcing a ban on textbooks that introduce Western thoughts and values in Chinese schools.

As for Western attractions, such as the Shanghai Disney Resort and the soon-to-open Beijing Universal Studios, it is unclear whether they will also have to comply with the tourism administration’s renewed emphasis on party propaganda.

Despite all of the Party’s efforts to spread loyalty, people are slowly losing their obedience. A campaign to collect overdue party membership dues last year collected about 277 million yuan (about $41.8 million), owed by more than 120,000 party members working in state-run companies, in Tianjin City alone, according to The Wall Street Journal.