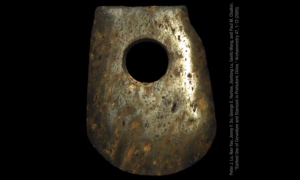 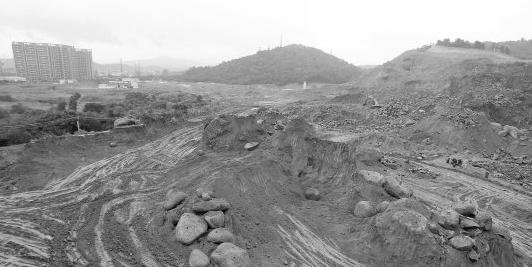 The Laifenggang archaeological excavation site was leveled by bulldozers overnight on June 14, while they were building an extension to a metro line in Guangzhou. Experts said it was a massive loss to Chinese heritage. (Weibo.com)
China

Before archaeologists got a chance to finish their excavations, five tombs dating back to the Shang dynasty were bulldozed into rubble overnight on June 14, to make way for a new railway route on the Chinese metro line 6 in Guangzhou city.

When Tian Maosheng, an archaeologist at the site, arrived in the morning to look at a piece of coarse pottery from the late Shang dynasty (1600 BC–1046 BC), he found the site in ruins and the piece gone. It was bulldozed into nearby mounds of yellow dirt, according to the News Express Daily.

The tombs, one of the relics unharmed by Mao Zedong’s Cultural Revolution, date from the late Shang period and into the Spring and Autumn period, a span of around 1,000 years. That timeline would make them over 3,000 years old.

Archaeologists said the destruction of the site was an incalculable loss to Chinese heritage. Dozens of pottery pieces and over ten stone tools had been dug up prior to the demolition. These artifacts had shed light on the early culture of China’s south, and in particular on the beginnings of the Nanyue Kingdom, an ancient state that included nearby provinces and what is now northern Vietnam, according to the Southern Metropolis Daily.

The Guangzhou Metro Corporation said they had earlier obtained the local archeology bureau’s permission to perform construction work near the tombs. The bureau replied that at the end of May they had informed the railway company of the relics’ boundaries, and had not agreed to the demolition. Railway officials claimed that destroying the tombs had been “an accident” and that construction workers hadn’t known there were ancient burial chambers on the planned route, according to NTD Television.

Yet the tombs had been impossible to miss, said Zhong, the leader of the archeology team hired by the Guangzhou City Culture and Archeology Research Institute. He pointed out the red tape sealing off the area, the caution signs planted in the ground, and a white plastic sheet thrown over one of the tombs.

“The sheet was very large. I don’t believe they didn’t see it,” he said. “The workers only destroyed everything sealed inside the red tape, and they deliberately moved our archaeological tools off to the side before they started working.”

Four days prior to the incident, residents in the same city awoke to drilling and sawing noises as two well-known historic buildings were knocked down despite a regime order to stall the demolition.

Jinling and Miaogao Terrace had been built in the 1940’s under Chiang Kai-shek’s nationalist reign, giving them historical value. Neighbors said the scene of destruction reminded them of the Japanese bombings of China in the Second World War.

“It’s unacceptable,” a netizen commented on Sina Weibo, China’s censored version of Twitter, “The public had high hopes of preserving Guangzhou’s culture but we have instead been deeply disappointed.”

Party protection of historic buildings has always been slack, according to other netizens. At worst, construction companies will be made to pay damages which are easily brushed off as part of production costs.

The way the construction workers ignored the order to delay the demolition led several Guangzhou residents to question whether there was collusion between the workers and local officials behind the scenes.

Hong Kong newspapers pointed out that the construction company’s legal representative is Peter Lam, chairman of the Hong Kong Tourism Board, who also enjoys a seat on the Chinese People’s Political Consultative Conference, a national-level official body that purports to advise the Communist Party. Official reports in China did not mention Lam’s political ties.