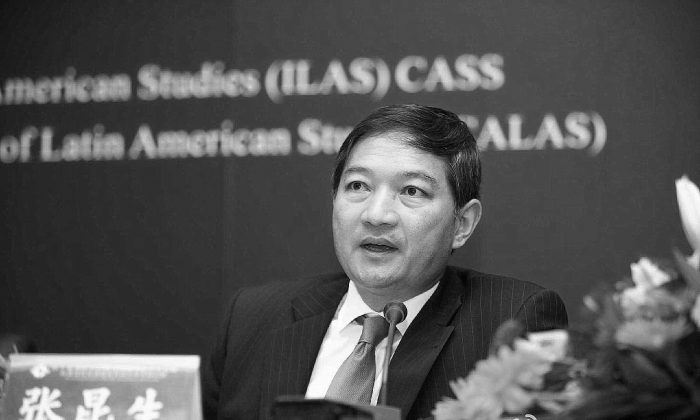 Zhang Kunsheng, one of the four assistant ministers of the Ministry of Foreign Affairs, was sacked after speculation in the state-media that he is either involved in corruption or espionage. (Weibo.com)
China

In China, First ‘Tiger’ of 2015 Goes Down in Anti-Corruption Campaign

Foreign dignitaries visiting China will soon notice an old face is missing: Zhang Kunsheng, the highest ranked of the four assistant ministers of the regime’s Ministry of Foreign Affairs, has been ousted.

The Ministry of Foreign Affairs’ spokesperson announced at a press conference on Jan. 2 that Zhang was sacked for violating Communist Party discipline—usually a byword for corruption—without further elaboration.

A powerful position within the regime’s diplomatic circles, coming just after the Foreign Minister and six Vice Ministers, Zhang was also the director of the Ministry’s Department of Protocol, where he handled tasks such as arranging itineraries of Chinese officials traveling abroad and of foreign officials visiting China.

When former U.S. President Bill Clinton visited China in 1996, it was Zhang who welcomed him and helped plan his itinerary, Hong Kong’s Oriental Daily reported on Jan. 3.

A day after the ministry announced Zhang’s downfall, an article published in the blog of state-run Xinhua, the official regime mouthpiece, suggested he was ousted due to either corruption or spying.

“It is quite fitting to say that the sacking of Zhang is the ‘first tiger’ for 2015…” Xinhua said.

“Since the anti-corruption campaign did not stop on Jan. 1, 2015, it indicates that the campaign will increase in scale in the New Year.”

The sacking of a senior Party official, though under the guise of the anti-corruption campaign, is often the outcome of intense political infighting within the Chinese Communist Party.

“Anti-corruption is simply another word for political infighting—not wanting other political foes to challenge your own power,” says Liu Dong, an independent commentator on Chinese political affairs.

In an interview with state-run newspaper Spring City Evening in southwest Yunnan Province in 2002, Zhang revealed his political affiliation to Jiang Zemin, the former paramount leader of China, saying that the most memorable event in his diplomatic career happened in 1997.

Targets of anti-corruption campaigns in China are often the outcome of political infighting in the Communist Party.

“That year, Party leader Jiang visited the United States for the first time. And I participated in drafting all of Jiang’s 27 speeches. Our team also worked meticulously on his itinerary,” Zhang said. Jiang and his vast network is widely understood to be an opposing political force to Xi Jinping, the current leader, and much of Xi’s campaign of purges and arrests has taken aim at top lieutenants in the Jiang faction.

Zhang showed further connection with Jiang Zemin when he elaborated on his contribution in the political tug-of-war with the United States after the bombing of the Chinese embassy in Belgrade.

“In 1999, after our embassy in Belgrade was ruthlessly bombed by NATO, a series of negotiations began between the United States and China,” Zhang said. “We forced the United States to apologize to China five times, and the U.S. lowered its flag in half-mast when the corpses of our brave soldiers were shipped back to China.” That propaganda victory was held up by the Jiang administration at the time as a triumph over the United States.

In a country where media is tightly controlled and censored it’s not absolutely certain if Zhang is indeed the first official to be ousted this year, but he certainly will not be the last.

A report by Hong Kong-based Phoenix Television said on Jan. 3 that “More tigers are likely to be purged within Chinese diplomatic circles.”