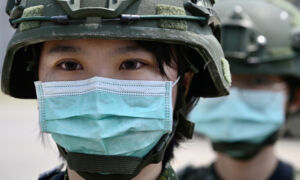 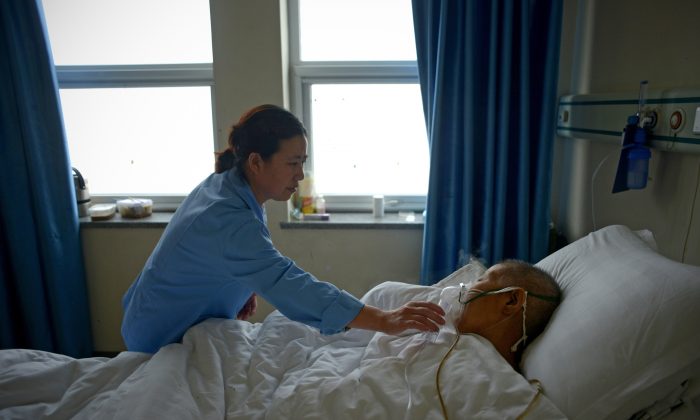 A man suffering from pneumonia receives treatment in a ward at a hospital in Beijing on Dec. 9, 2015. (WANG ZHAO/AFP/Getty Images)
China

In March, as surgeons prepared to operate on the father of Mr. Liu in a county hospital in central China, hospital staff suddenly called him and other patients’ family members over for a secretive meeting.

Under the pretense of needing “special fees” for experts coming from a larger city, the staff members of the Xihua County People’s Hospital in Henan Province told Liu that they would require 1,500 yuan (about $225) to operate on his father, who had suffered a heart attack. He and the other patients’ family members paid the fees.

“These fees were not part of the medical bill,” Liu told Henan Television.

Rather, they were part of what has essentially become institutionalized bribery.

In China, the service industry and bribes go hand in hand. This is especially apparent in hospitals, where patients lavish exorbitant sums of “red envelope” money on doctors to ensure high quality—or just adequate—treatment.

The phenomenon, which gets its name from the small, red, money-filled packets given to friends and family during the Lunar New Year, may not always involve the iconic holiday envelope. But bribery is firmly entrenched in the Chinese medical culture and has its roots in the structure of the Communist Party’s health care system.

Statistics for the medical scene in China are difficult to come by, but surveys done by various Chinese news sites suggest that bribery is the norm. In a survey of 60,000 netizen respondents, online medical community Disease.39.net found that 64 percent had given red envelopes to doctors. Another survey done by the same site showed that nearly 90 percent of patients had paid their doctors extra fees, whether in hard cash or by treating them to meals.

In May 2011, an academic thesis published in a Chinese medical journal did a study based on 4,000 survey subjects and determined that about 55 percent of patients paid bribes. They were more likely to do so if they had higher education or lived in economically developed parts of China.

A patient who does not pay bribes runs the risk of receiving sloppy medical treatment or no treatment at all, and in some cases, vindictive reactions from medical staff.

In a 2014 case reported by Chinese news outlet Sohu in Jiangsu Province, a patient was abandoned in the operating room when he refused to pay an additional fee of 2,000 yuan ($300). Another incident, reported this February, saw an Inner Mongolian doctor get halfway through an operation before abruptly demanding 7,000 yuan from the patient to continue. In 2010, a nurse in Shenzhen was reported by Southern Metropolis Daily to have sewn shut the anus of a new mother, after the latter provided a paltry sum in an envelope (a mere 100 yuan, or $15).

Since the 1950s, the Chinese state has based funding for hospitals and their staff on the principle of “nourishing the medical field with medicine.” What this means is that hospitals make revenue through the direct sale of drugs, a sum usually included in the overall cost of treatment.

In recent years, as the costs of medicine and equipment have inflated, staff have seen steady cuts in formal income, according to a 2012 article by the Humanism Economics Society. The widespread “red envelope” culture augments the shortfall.

Given the current political environment, in which the Communist Party leadership is increasingly concerned with corruption undermining popular support and eroding its authority, the culture of bribery is causing headaches.

Xu Fengqin, a Beijing official, told popular Chinese web portal NetEase that Chinese medical staff make even less money than doctors in developing African countries. “Some health professionals have to work overtime, prescribe lots of drugs, and have the patients go through many examinations. Regulation alone is not sufficient; there must be institutional reform.”

Enacting reforms is easier said than done. In May 2014, the National Health and Family Planning Commission introduced new measures to curtail the red envelope culture. Documents were distributed and signed throughout the country, with patients and doctors made to forswear bribery.

But the measure backfired. Instead of doing away with hospital bribes, patients were even more eager to pay. They assumed the pledge not to give red envelopes was actually a hint to give more.