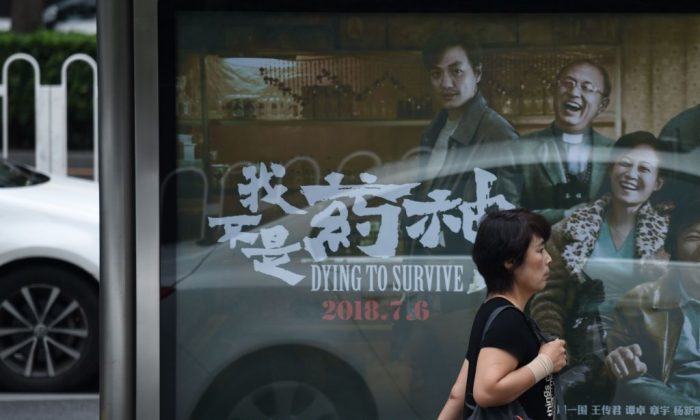 A woman walks past a poster of the film "Dying to Survive" at a bus stop in Beijing on July 12, 2018. (Wang Zhao/AFP/Getty Images)
Chinese Regime

The Chinese regime maintains tight control over what films—both domestic and Hollywood imports—are allowed to screen in China’s cinemas. Western studios have been told to cut out scenes that portray China “unfavorably.” Domestic films are often axed for having “sensitive” content.

So it is unusual when a domestically produced film exposing a long-running social problem in China is able to screen nationwide—and even become a box-office hit.

The film “Dying to Survive,” which opened in theaters on July 5, is based on the true story of Lu Yong, a textile trader who became diagnosed with leukemia. Burdened with the cost of buying Gleevec, a cancer drug manufactured by Swiss drug company Novartis that was not covered under China’s national health insurance at the time, Yong began to look for generic substitutes in India. He then started to smuggle the drugs and sell them at an affordable price for at least 1,000 other leukemia patients.

As of July 15, the film has accumulated 2.407 billion yuan (about $359.9 million) in box office earnings, making it the third-highest grossing film in China in 2018, surpassing the Hollywood hit “Avengers: Infinity War,” according to Chinese news portal Sohu.

In one of the film’s most memorable scenes, an elderly woman with leukemia says: “40,000 yuan (about $5,980) per bottle. I have been sick for three years and taken the drug for three years. To buy the drug, I have sold my home. I have dragged down my family as well.

In 2014, Lu was detained and charged for “selling fake drugs,” or generic drugs unapproved by the Chinese authorities, which are considered counterfeit under Chinese law. While Lu was detained, more than 300 leukemia patients petitioned for his release, according to China.org.cn, a state-run online news service based in Beijing.

In April 2015, after spending 119 days in detention, Lu was released after the prosecutor in Yuanjiang City in southern China’s Hunan Province, concluded that he was technically a buyer on behalf of other patients and not a seller of the drugs, according to the state-run Legal Daily. The prosecutor dropped all charges.

Propaganda Amid a Trade War

Li Yuan, a former high-ranking official who worked for an organization affiliated with China’s Red Cross Foundation, told in Radio Free Asia (RFA) that the film’s release was a tactic by the Chinese regime to incite hatred against foreign countries, placing blame on foreign pharmaceutical companies for the high price tags on life-saving drugs. While China is in the midst of a trade war with the United States, the propaganda can sway Chinese people’s opinions in support of the country’s trade stances.

On May 1, China announced that it would exempt import tariffs on 28 foreign-imported drugs, amid growing pressure from the United States for China to open up its markets. Li said the announcement also served as propaganda that the Chinese regime is alleviating citizens’ burden.

But the prices of those 28 imported drugs did not drop after the tariffs were scrapped, according to the state-run Beijing News, in a report on June 11. Beijing News concluded that the price-lowering was stalled by government agencies failing to act promptly.

China’s own health care system adds additional surcharges on the already expensive imported drugs. In September 2013, while speaking at a health forum, Guo Jianying, a deputy investigator at the pricing bureau of the National Development and Reform Commission (NDRC), said that the final price tags on drug imports typically carry an additional 17 percent in value-added tax, 15 percent in hospital fees, and 20 percent in transportation fees, according to People’s Net, a state-run news site.

State-run hospitals are the primary channel for people to buy medicines. About 75 percent of retail sales of all drugs occur within China’s national health care system, said Zhu Hengpeng, deputy head of the Institute of Economics Chinese Academy of Social Sciences, according to a July 15 report on the news portal Tencent. Thus, hospitals’ near monopoly on drug sales has pushed up drug prices. Hospitals are then in the position to increase revenue by prescribing expensive foreign and domestic-made drugs to patients, rather than the cheaper generic substitutes.

RFA, citing an unnamed pharmaceutical businessman, reported on July 9 that corruption, such as hospitals getting kickbacks from Chinese pharmaceutical companies, also drives up drug prices.

Now that there is unexpected attention on China’s national health system after “Dying to Survive” became a big hit, the Chinese authorities want to dampen the buzz generated by the film, said Li.

On July 8, China’s propaganda department gave the Chinese media a verbal instruction prohibiting any interviews, reports, commentary, or reposting of articles about the film.

China is itself a major producer of generic drugs. According to an April 13 report by the state mouthpiece People’s Daily, 95 percent of the roughly 170,000 drugs that have obtained state approval for manufacturing are generic drugs.

However, domestic generic drugs are notorious for their poor quality. Even though they are covered by China’s national health insurance, most citizens are wary of taking them. Some generic drugs are produced by underground, unregulated factories, according to a July 6 report by state-run Xinhua.

Sun’s case revealed a problem in China—generic drugs manufactured by different Chinese companies but with identical medical names have different levels of effectiveness and side effects.

The Chinese regime wants citizens to buy domestic drugs, despite competition from India, the largest supplier of generic drugs in the world. From April 2017 to March 2018, India exported $17.3 billion worth of generic drugs. However, only 1 percent went to China, according to pharmaceutical news website FiercePharma. This is due to China’s trade restrictions that have prevented Indian imports from entering the market.

It is not known precisely how much Chinese patients spend annually on generic drugs from India, but the strong demand—as reflected in the recent film—has resulted in a unique economy: Chinese travel agencies regularly organize trips to India for Chinese citizens to buy drugs there, according to a May 2016 report by Voice of America.

Recently, the Chinese regime seemed to have placed additional hurdles preventing Chinese from buying India-made drugs, according to a July 12 report by RFA.

Additionally, drug shipments from India to China have been delayed because Indian customs agents withhold parcels that do not possess remittance records and personal information from Chinese buyers.

Interestingly, the Chinese regime’s interference coincides with news that China is planning to speed up regulatory approvals for more Indian pharmaceutical companies to export to China. The country is seeking new commercial partners to offset any losses from its protracted trade war with the United States, according to a July 12 report by Reuters.