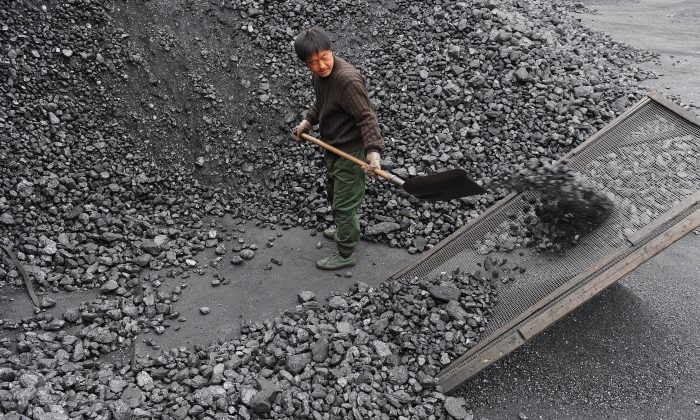 A Chinese worker shovels coal at a mine plant in Hefei, a city in eastern China’s Anhui Province, on Dec. 8, 2009. (AFP/AFP/Getty Images)
Chinese Regime

The seven-month-long detention of three Chinese doctors has put the plight of a vulnerable group in China directly under the media’s spotlight.

Huang Hengping, Zhao Xiaobo, and Dong Youru are three doctors who specialize in the treatment of pneumoconiosis, an incurable lung disease caused by inhaling particles such as dust or asbestos. They were employed at Guizhou Aerospace Hospital in southwestern China’s Guizhou Province. People working in coal mines are extremely vulnerable to the disease, especially if they work without proper protective gear such as facial masks.

The hospital was the target of a police investigation after local police were informed about a tip that the Guizhou Ministry of Human Resources and Social Security had received in 2016, according to a June 19 report by state-run newspaper Medical Weekly. The tip accused the three doctors of enjoying a “monetary relationship” with local laborers, meaning the doctors intentionally misdiagnosed laborers with pneumoconiosis in exchange for monetary benefits.

According to Medical Daily, 10,708 people took high-voltage chest x-ray imaging tests at the hospital from 2012 to 2016. Roughly 2,274 of them later met with a pneumoconiosis doctor at the hospital, and 1,640 were found to be suffering from the lung disease.

To verify the tip’s claim, the police reviewed the medical diagnosis papers of 547 patients who were diagnosed with pneumoconiosis by either Huang, Zhao, or Dong. Upon reviewing the diagnoses and seeing the patients’ x-ray images, the police determined that only 42 of these patients were suffering from the lung disease.

Based on such findings, in November 2017, the police detained the three doctors under the charge of dereliction of duty, and estimated the doctors’ malpractice had resulted in the loss of 300 million yuan (about $46 million) in national insurance. Local prosecutors have attempted to charge the doctors, but the case was sent back to police several times for further investigation.

On June 23, multiple Chinese news sources reported that the three doctors were released on bail pending a trial, and returned home at around midnight.

Some observers suspect that the doctors were framed by police because local authorities did not want the public to know about the prevalence of pneumoconiosis in the region.

Deng Liqiang, director of the legal department at the Chinese Medical Doctors Association, has been following the case since February. He spoke with one of the accused doctors, Dong, at 7 a.m. on June 23, before he and the others were released on bail. Dong said he was innocent and that he never accepted bribes from his patients, according to state-run news site Red Star News.

The police’s own medical conclusions have since been challenged. In March, Mao Rong, a director at Tongji University Affiliated Shanghai Pulmonary Hospital, penned an article published on Medical Weekly, explaining that different doctors might come to different conclusions with the same chest x-ray images, meaning that the x-ray images alone would not be a reliable source for determining whether someone had pneumoconiosis.

“When doctors make a prognosis on pneumoconiosis, there are subjective and objective views, from the medical and legal perspective,” said Liu, adding that the police’s own medical review could not be the basis for determining whether the three doctors had committed a crime.

The three doctors were targeted because local authorities wanted to cover up the plight of people who are suffering from pneumoconiosis, said Zhu Xinxin, a freelance writer and former editor of Hebei Radio Online in an interview with NTD.

“Pneumoconiosis is an occupational illness. It has to do with labor protection in the region,” Zhu said, adding that the illness would expose the fact that local authorities did not do enough to protect coal workers.

According to multiple Chinese sources, at least 6 million Chinese people suffer from pneumoconiosis. Most of the lung disease victims contracted the disease while working in mines in China, but very few of them have received compensation, according to a Reuters report in 2010.

Xu Xinsheng, a long-time activist for victims of pneumoconiosis from Leiyang, a city in southern China’s Hunan Province, expressed concerns in an interview with NTD that the three doctors’ arrests could have a lasting silencing effect on doctors.

“Doctors may be afraid to draw conclusions from their diagnosis of occupational hazards,” Xu said.