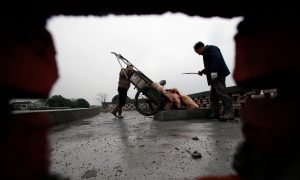 In China, Your Pork May Be Fished out of a River
0
Share Now
TelegramFacebookTweetEmailTellMeWeReddit
Copy Link 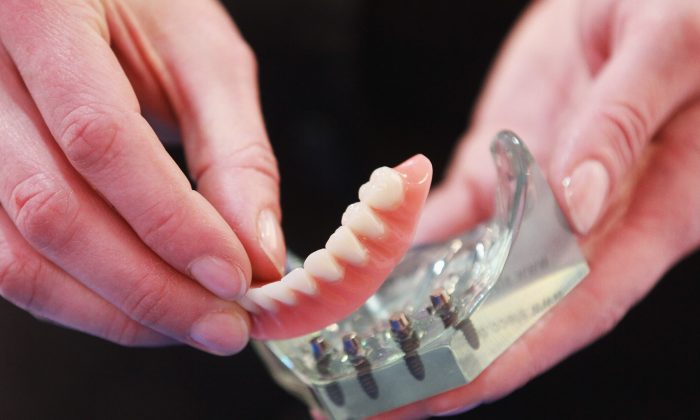 Magnetic false teeth are seen during a trade fair in Hamburg, Germany on May 3, 2012. In China, some Chinese companies have been found to be manufacturing dentures with scrap steel. (Joern Pollex/Getty Images)
China

In China, Dentures Are Made with Scrap Steel

In China, some of the most unthinkable products have found their way on the market, such as second-hand clothes collected from the morgue, tainted vaccines, and poisoned milk powder. Now add fake “false teeth” to this notorious laundry list.

“We use scrap steel,” a worker at Cidu Zhongcheng Medical Supply Company, a denture maker in Beijing, told an undercover journalist from a China Central Television investigative documentary program that aired on March 15. Another employee at the same company later admitted that adding scrap steel would reduce the cost of production.

Dentures are manufactured with special, clinically approved alloys. Scrap metal and steel are hazardous to health because they often contain toxic heavy metals.

The dentures company had obtained the scrap steel from a middleman, Mr. Hou from the city of Foshan in Guangdong Province. When interviewed by CCTV, Mr. Hou claimed that 90 percent of his scrap steel supply came from Tianjin, and added that he had never met the boss of the company that he had been working for over the past 7 or 8 years.

In addition to the use of problematic materials, Cidu Zhongcheng appeared to subject its products to a highly questionable disinfection process. “I bring in my own toothbrushes from home, the ones that I no longer use,” said a female worker, who could be seen cleaning the finished dentures with a toothbrush.

On China’s Twitter-like microblog Sina Weibo, netizens expressed displeasure with yet another unsavory fake product, and threw jibes at the CCTV show, or “3.15” after the day it airs each year.

One netizen from Shandong wrote: “The regulatory agency can be scrapped since it doesn’t make any difference whether it exists or not. Stop wasting taxpayers’ money. I don’t want to pay taxes to support a bunch of imbeciles.”

“After seeing this news, I worry for my grandma. So many seniors have wear dentures now; where is your conscience!!!! My god!,” wrote a netizen from Jiangxi Province.

“Another 3.15 show. In China, if there isn’t a large-scale death, the authorities won’t bother to investigate; China has a large population, and it makes no difference if a few people die,” lamented a Jiangsu netizen going by the name of “Miao Lifeng.”

In 2008, baby milk powder was discovered to be tainted with melamine, an industrial chemical. While some Chinese reporters broke the news earlier in the year, it was quickly covered up and only denounced after the end of the Summer Olympics in Beijing. Toxic milk powder poisoned hundreds of thousands of babies and caused at least half a dozen deaths.