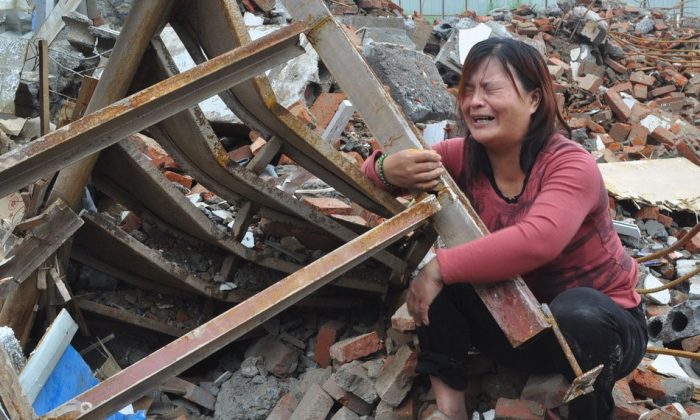 Zhang Hongwei's wife kneels among the rubble of her home and cries, in Xinzheng City of central China’s Henan Province, Aug 8, 2014. Zhang and his wife were kidnapped by a group of anonymous men who burst in on them while sleeping. When the couple was released a few hours later, they found their home was demolished. (Screenshot/163.com)
China

In China, Couple Held in Cemetery While Home Demolished

More than 10 unidentified people broke into a residential house in Xinzheng City at midnight on Aug. 8 and kidnapped the husband and wife, who were asleep.

The couple were not given a chance to dress and were taken to an isolated cemetery. After being held for four hours, the two were finally released. When they returned home, they found it was now a pile of rubble.

According to a Chinese National Radio report on Monday, the people who took the couple to the cemetery drove a large van that had no plates.

“I heard some people come upstairs when I was still in a daze. Several people suddenly showed up with flashlights and wooden sticks,” the husband, Zhang Hongwei, told state-run Xinhua. “I was lifted up. I only had my underwear on, and they didn’t allow me to put on any clothes. I just grabbed a blanket.”

Zhang said that he bought the right of usage of the land in 2008, and built a four-story house on it. However, the house and everything inside are ruined now.

Photos in the report show piles of bricks where the couple’s house was, with the wife on her knees among the debris sobbing and the husband looking desperate and sitting on the ground.

One photo shows a shabby tent on the broken bricks set up with metal poles and fabric, with only a roof and one wall, and a small bed underneath the shelter. The other three sides of the tent are open to the air.

The Chinese Internet has been filled with outrage over this housing demolition. However, the local authorities haven’t seemed to show any empathy for the couple’s suffering.

The city’s statement said over a hundred families, including Zhang’s, had been asked to move out in April 2012, because of a subway project that started January 2014. The Zhang’s failure to cooperate with the city caused the project a delay of over 20 days, the statement said, which led to “severe losses for the construction company.”

The statement admits that the media reports about the demolition are true, but it says whether illegal actions were involved, and who did the demolition, are still under investigation.

Many netizens condemned the demolition as a “thug action.” “I just want to know whether there’s law or not in China? Is this the legal society that China has been promoting? Even the Japanese intruders were less cruel than that.” Netizen ZiyouDeaqi said.

Netizen Baiyue Lolita in south central China’s Guangxi Province commented, “I’ve seen so many forced demolitions. In Nanning (capital of Guangxi), the demolition workers threw bricks at the elderly, and demolished houses even when there were people cooking in the house. They don’t care about people’s lives at all.”

A recent mass protest arising from a dispute over housing demolition happened on Aug. 6, when over 100 police and special police clashed with local villagers during a forced house demolition in Lushan County in southwest China’s Sichuan Province, according to local villagers.

During the conflict, one homeowner was pushed over a cliff by police and died, more than 10 residents were injured, and 4 were arrested. Family members of the arrested residents asked the local government to prosecute those responsible for the death and to release the four who had been arrested, but no response was forthcoming.